R-tree is an advanced height-balanced Tree Data Structure that is widely used in production for spatial problems (like geographical map operations). We have presented the need for R Tree along with the basics of R Tree so you can use it to solve problems as well.

Introduction / Why is there a need for R Tree?

Spatial data can be defined as any data that points to specific location on Earth. Very often, these objects represent multi dimensional spaces that aren't well represented by point locations such as census tracts, countries as they occupy regions of non-zero size.

This data is stored in a database. And common operations for any database are storing data and performing all sorts of queries among others.
An example of a query or a real world problem is to find all the restaurants within 20 miles of a particular area.

These kind of operations are seen in CAD(Computer Aided Design) and geo-spatial applications. For a real-time application, there will be multiple queries as such performed per second. And this can be very time consuming and not very cost efficient if the database isn't designed optimally. Hence the database is required be designed in an efficient way in order to reduce the time taken for storing and querying.

Although there are many indexing based mechanisms such as B-trees and ISAM indexes, they won't work well with multi-dimensional data. Therefore, a data structure is required that can work in multi-dimensions and also is quick with the entire indexing part. Hence R-trees are used.

Before going to R-trees, there is one more thing to know which is MBR(Minimum Bounding Rectangles. This term is used to refer a geographical feature or a dataset, for spatial query purposes.

It generally is a 2D object (polygon, point, line) or a set of objects within its 2D x-y coordinate system which is the smallest bounding for a set of points in N-dimensions within which all the points lie.

An R-tree is a height-balanced tree with index records in it's leaf nodes containing pointers to data objects Nodes correspond to disk pages if the index is disk-resident, and the structure is designed so that a spatial search requires visiting only a small number of nodes The index is completely dynamic;
inserts and deletes can be intermixed with searches and no periodic re-organization is required.

A spatial database consists of a collection of tuples representing spatial objects, and each tuple has a unique identifier which can be used to retrieve it.
Leaf nodes in an R-tree contain index record entries of the form

A tuple in a database is referred to as a tuple_identifier and I represents n-dimensional rectangle which is the bounding box of the spatial object indexed.

where n represents the number of dimensions and Ii represents a close bounded interval [a,b] describing the extent of object along the dimension i.

where child pointer is the address of a lower node in the R-tree and I covers all rectangles in the lower node’s entries.

The structure of an R-tree and the illustration of the containment and overlapping relationships that exist between the rectangles is given below. 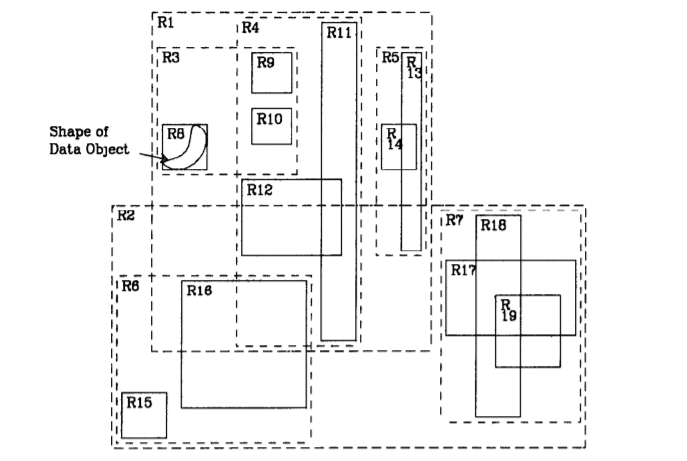 The height of an R-tree containing N index records is at most |logm N| -1 as m is the minimum branching factor of each node.

If the nodes will have more than m entries then this will decrease the tree height and improve space utilization. The parameter m can be varied as a part of performance tuning.

Given a basic introduction to R-trees, in the upcoming sections insertion, deletion and searching will be discussed

New index records are added at the leaves and nodes that overflow(>M) are split. In this section we will be discussing how the generic insertion works and the two techniques for node splitting which are the "Exhaustive Algorithm" and the "Quadratic Search Algorithm".

Insert a new index entry E into an R-tree. The algorithm first checks in which leaf the new entry must be placed and checks if that has enough space; if it does then it inserts else node splitting happens. After this all is done the changes are propogated upwards and if this causes the root to split then a new root is created.

1.Find position for new record Invoke ChooseLeaf to select a leaf node L in which to place E.
2.Add record to leaf node If L has large room for another entry then install E, else invoke SplitNode to obtain L and LL (current leaf and new leaf containing all old entries of L)
3.Propogate changes upward Invoke AdjustTree on L also passing LL if split was performed
4.Grow the tree taller If node split propogation caused the root to split, create a new root whose children are the two resulting nodes.

The leaf nodes hold indexes that point to some data in the disk, if, due to the new entry the leaf nodes get split up then this information has to be updated in the parent nodes and this has to go all the way up to the root.

If a node already has M entries, then to add a new entry this node (M+1 entries) has to be divided into two. Now, this division should happen in such a way that the total area of the covering rectangle should be minimised, i.e the division should be done in such a way that it becomes very unlikely that both the new nodes will be examined on subsequent searches. This is because the decision whether to visit a node depends on whether it's covering rectangle overlaps the search area, hence the total area of the two covering rectangles should be minimized.

The difference between a bad split (a split that has more area) and a good split(comparitively lesser area).

The same criterion was used in ChooseLeaf to decide where to insert a new index entry at each level in the tree, the subtree that was chosen was the one whose covering rectangle would have to be enlarged least.

Three algorithms will be discussed here which are

Exhaustive Algorithm
The most straightforward way to solve the problem is to generate all possible groupings and choose the one that not only suits the criterion, but is also the best.

This means generating 2^(M-1) possibilities; even for a reasonable M value such as 50, the time complexity is very large.

Quadratic-Cost Algorithm
This algorithm does give a small area, but it doesn't guarantee it to be the best.

The structure of the tree is not similar to the traditional binary search trees, there might be more than one subtrees for a node corresponding to the indices. Although seaching will begin from the root, the worst case complexity is not guaranteed.

Nevertheless with most kinds of data the update algorithms will maintain the tree in a form that allows the search algorithm to eliminate irrelevant regions of the indexed space, and examine only data near the search area.

With this article at OpenGenus, you must have the basic idea of R Tree. You can go deeper to contruct the complete search operation and delete operation on your own easily. Try it.

Pruning in Machine Learning is an optimization technique for Neural Network models. We have explained how to do pruning, different types of pruning, random pruning, advantages and disadvantages of pruning.

This article compares counting sort, radix sort, and bucket sort with important points that will help you make out the differences between these sorting algorithms.