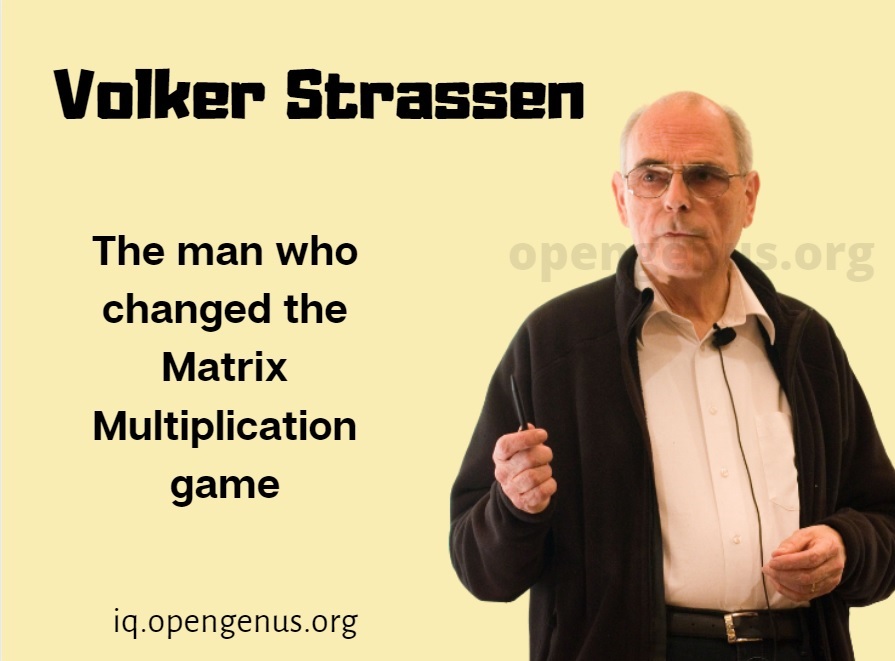 Volker Strassen, the man who changed the Matrix Multiplication game

This happens to be a major progress as it opened up a new path in field which was thought to be saturated. Though more optimized algorithms has been formulated now but this is considered as one of the strongest game changing theoretical results in the History of Algorithms.

Volker, once, said: "I have always been more intrigued by lower complexity bounds than by algorithms"

Major contributions of Volker Strassen were:

During Winter of 1974, Volker attended Oberwolfach Conference on Computational Complexity. A couple of months back, Volker formulated "A Fast Monte Carlo Test for Primality" which he had submitted it to SIAM Journal on Computing. He was discussing this with other attendents.

During the discussion, he said that a fast deterministic test for primality testing will be found in 10 years and a proof will be published that the set of primes is polynomially decidable.

This was a bold statement as it represented a major computation hurdle. His friend Ernst Specker (also a great Mathematician) disagreed and made a bet which was written in the Oberwolfach conference book.

10 years passed. Though progress was made in this field but the ultimate result as claimed by Volker was not established. Volker lost his bet and took Specker and his family on a Baloon ride around Zurich Lake. He, also, gifted one ounc of gold as was the terms of the bet.

The funny thing is that Specker brought one ounc of gold immediately after the bet (10 years ago) to be safe. In fact, the price of gold more than doubled in that 10 years.

Agrawal, Kayal and Saxena did finally solve this but in 2002. Volker was right but was off by 18 years.

This can be considered as the single most important theoretical discovery in the field of Algorithms. It was strongly believed that Matrix Multiplication cannot be done better than O(N^3) time but it was Strassen who came up with his algorithm which broke the barrier and opened a whole new path.

He introduced this in his paper named "Gaussian Elimination" where he, also, introduced a fast algorithm for Matrix Inversion based on the same principles.

This has, also, one of the first algorithms to demonstrate the use and power of Random Algorithms.

It used recursive Fast Fourier Transform and other Number Theory ideas. The time complexity is O(N logN loglogN) for the multiplication of two N digit numbers.

It was beaten on 2007 by Furer's Algorithm which has a better asymptotic time complexity and is expected to work faster for astronomically large integers. It is not used in practice as of now and the use of Schonhage Strassen algorithm continues.

Some quotes by Volker Strassen are:

"Once you have a bike with pedals on the front wheel, you can increase its speed by expanding the wheel"

Poem by Volker Strassen (presented at a conference) for the birthday of his friend "Joachim":

"A jolly professor at b-it,
Brilliant scientist, teacher and wit,
Wrote his thesis out of reach
Studying curves on the beach;
The fresh air, said he, kept himself fit."

Volker Strassen is a great man as well as a great mathematician. He brought humanity's focus on cutting edge algorithms and how random algorithms should be taken seriously. Hope you got an insight into his mind.

In this article, we will explore everything about variables in JavaScript. In JavaScript, a variable can be declared in 3 ways (var, let, const) and the variable scope depends on this.

Apriori is a associative learning algorithm which is generally used in data mining. It follows the principle that people who bought this will also buy this.