Introduction to Branch and Bound Technique

The Branch and Bound Technique is a problem solving strategy, which is most commonly used in optimization problems, where the goal is to minimize a certain value. The optimized solution is obtained by means of a state space tree (A state space tree is a tree where the solution is constructed by adding elements one by one, starting from the root. Note that the root contains no element). This method is best when used for combinatorial problems with exponential time complexity, since it provides a more efficient solution to such problems.

The Algorithm: Branch and Bound Technique

In this technique, the first step is to create a function U (which represents an upper bound to the value that node and its children shall achieve), that we intend to minimize. We call this function the objective function. Note that the branch and bound technique can also be used for maximization problems, since multiplying the objective function by -1 coverts the problem to a minimization problem. Let this function have an initial maximum value, according to the conditions of the given problem. Also, let U0 be the initial value of U. We also calculate a cost function C which will give us the exact value that the particular node shall achieve.

The algorithm of the branch and bound method for this problem will be as follows:

For each subset s in S, do the following:

In the end, the the subset s for which the current value of U0 is obtained will be the best solution to the given problem, and the value of the cost function at that node will give us the solution. Here, after each level, the value of U0 tells us that there shall be a node with cost less than that value.

For a branch and bound problem, there are two ways in which the solution can be represented:

Types of Branch and Bound

There are multiple types of the Branch and Bound method, based on the order in which the state space tree is to be searched. We shall now discuss each of these methods in detail. We will be using the variable solution method to denote the solutions in these methods.

The First-In-First-Out approach to the branch and bound problem follows the queue approach in creating the state-space tree. Here, breadth first search is performed, i.e., the elements at a particular level are all searched, and then the elements of the next level are searched, starting from the first child of the first node in the previous level.

For a given set {A, B, C, D}, the state space tree will be constructed as follows : 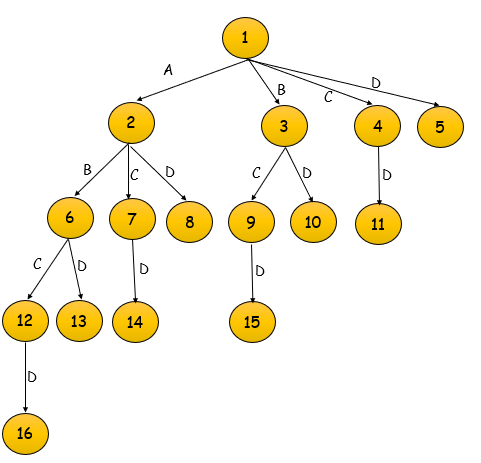 Here, note that the number assigned to the node signifies the order in which the tree shall be constructed. The element next to the set denotes the next element to be added to the subset. Note that if an element is getting added, it is assumed here that all elements in the set preceeding that element are not added. For example, in node 4, D is getting added. This implies that elements A, B and C are not added. 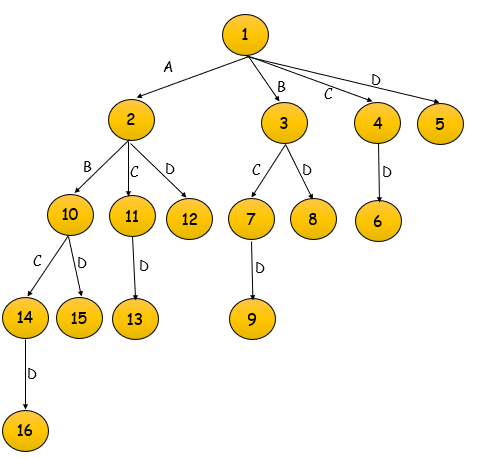 Here, one can see that the main difference lies in the order in which the nodes have been explored.

Why use Branch and Bound?

The Branch and Bound method is preferred over other similar methods such as backtracking when it comes to optimization problems. Here, the cost and the objective function help in finding branches that need not be explored.

Suppose the cost of a particular node has been determined. If this value is greater than that of U0, this means that there is no way this node or its children shall give a solution. Hence, we can kill this node and not explore its further branches. This method helps us rule out cases not worth exploring, and is therefore more efficient.

Problems that can be solved using Branch and Bound

The Branch and Bound method can be used for solving most combinatorial problems. Some of these problems are given below:

With this article at OpenGenus, you must have the complete idea of Branch and Bound Technique.

In this article, we'll explore favicons in HTML. A favicon is a small icon displayed left of the page title in a browser tab. It is loaded directly from the page requested, and is usually a logo representing the owner of the site.

In this article, we have explored where and how different domain of mathematics are used in Data Science. We have covered core ideas of Probability, Linear Algebra, Eigenvalues, Statistics and much more.