Linked List is a one of the DataStructure used for storing collection of data. A Linked List has the following properties:

The Linked List consists of series of structures called Nodes. We can think of each node as a record. The first part stores the data , and second part stores a pointer to the next node. So , conclusion is each node contains two field , a data field and and next field. Generally , Linked List means Singly Linked List. In Singly Linked List , the link of the last node in the list is NULL, which indicates the end of the list.
Each Node is allocated in the heap with call to malloc() , so node memory contimues to exists until it is explicitly deallocated.

The node which is called as head is the first node in the list. The last node's next pointer points to NULL value.

In this article we will talk about deleting an intermediate Node in Singly Linked List.

In this case, the node to be removed is always located between two nodes. Head and tails links are not updated in this case. It is done in two steps - 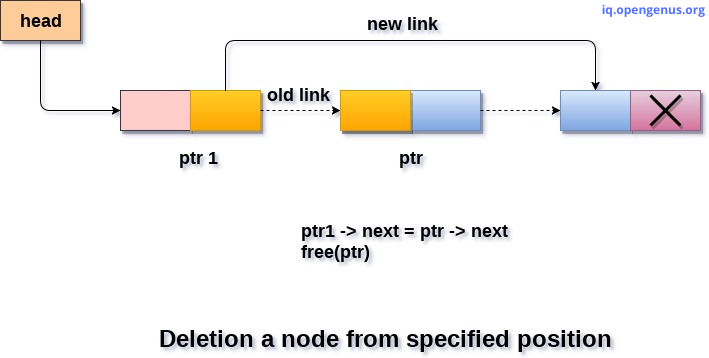 How to find the middle element?

To find the middle element, we can take two approaches:

Go through this article to get the complete idea

As we just need to position of middle element, we can get it using one traversal to count the total number of elements:

We can use the approach of slow and fast traversal to delete the middle node in just one traversal. The pseudocode will be like:

We will look the structures of both the types and brief about how we can delete an intermediate node from these two.

A Doubly Linked List contains an extra pointer, typically called previous pointer, together with next pointer and data which are there in singly linked list.

The disadvantage of Doubly Linked List are - Eachnmnode requires an extra pointer, requiring more space. The insertion and deletion of a node takes a bit longer.

In this case, the node to be removed is always located between two nodes, and heads and tails are not updated, the removal can be done in two steps-

Hope this article helps you understands the concept of Deletion in Linked List.

We will solve Boolean Parenthesization Problem using Dynamic Programming and understand the algorithm with a step by step explanation. The time complexity to solve this problem is O(N^3) with a space complexity of O(N^2).