A Fibonacci heap is a heap data structure similar to the binomial heap. It uses Fibonacci numbers and also used to implement the priority queue element in Dijkstra’s shortest path algorithm which reduces the time complexity from O(m log n) to O(m + n log n), giving the algorithm a huge boost in terms of running time.

A Fibonacci heap is a collection of rooted trees that are min-heap ordered. That is, each tree obeys the min-heap property: the key of a node is greater than or equal to the key of its parent. Fibonacci heaps are similar to binomial heaps but Fibonacci heaps have a less rigid structure. Each tree has an order just like the binomial heap that is based on the number of children. Nodes within a Fibonacci heap can be removed from their tree without restructuring them, so the order does not necessarily indicate the maximum height of the tree or number of nodes it contains.
An example of Fibonacci Heap consisting of five min-heap-ordered trees and 14 nodes. The minimum node of the heap is the node containing the key 3. 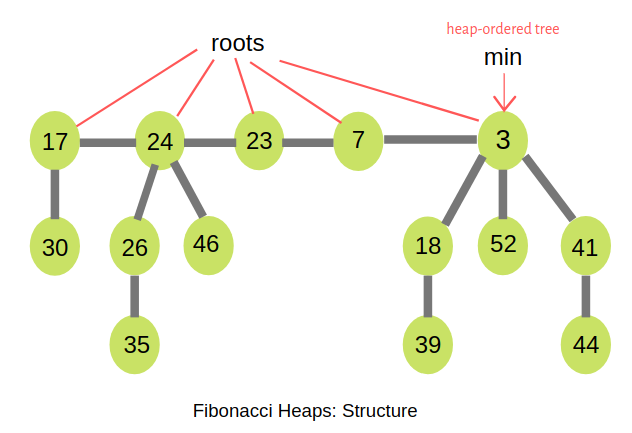 An important part of the Fibonacci Heap is how it marks nodes within the trees. The decrease key operation marks a node when its child is cut from a tree, this allows it to track some history about each node. Essentially the marking of nodes allows us to track whether:

When a second child is cut from its parent, the parent is moved to the root list. This ensures that the structure of the Fibonacci heap does not stray too far from that of the binomial heap, which is one of the properties that enables the data structure to achieve its amortised time bounds. 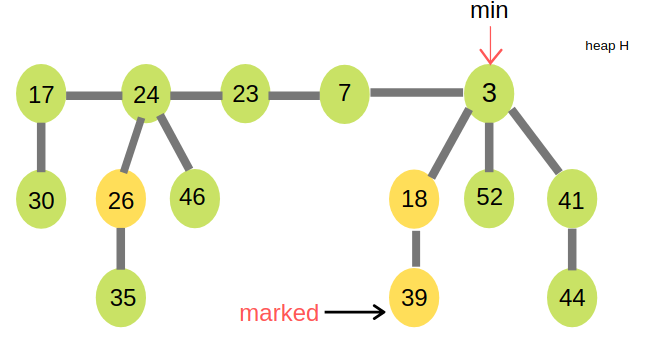 Then Potential Function of Fibonacci Heaps:

The different operations supported by Fibonacci heap are:

Finding minimum is one of the most important operations regarding Fibonacci heaps. A pointer to minimum node of the root list is always kept up to date.

Insertion to a Fibonacci heap is similar to the insert operation of a binomial heap. A heap of one element is created and the two heaps are merged with the merge function. The minimum element pointer is updated if necessary. The total number of nodes in the tree increases by one.
To insert a node in a Fibonacci heap H, the following algorithm is followed:

It works by first making a root out of each of the minimum node’s children and removing the minimum node from the root list. It then consolidates the root list by linking roots of equal degree until at most one root remains of each degree.
It is one of the most important operations regarding Fibonacci heaps. Much of a Fibonacci heap’s speed advantage comes from the fact that it delays consolidating heaps after operations until extract-min is called. Binomial heaps, on the other hand, consolidate immediately. Consolidation occurs when heap properties are violated, for example, if two heaps have the same order, the heaps must be adjusted to prevent this.
Following algorithm is used for Extract min in a Fibonacci Heap -

Decrease key lowers the key of a node. The node is then cut from the tree, joining the root list as its own tree. The parent of the node is then cut if it is marked, this continues for each anscestor until a parent that is not marked is encountered, which is then marked. The pointer to the minimum node is then updated if the node’s new value is less than the current minimum. 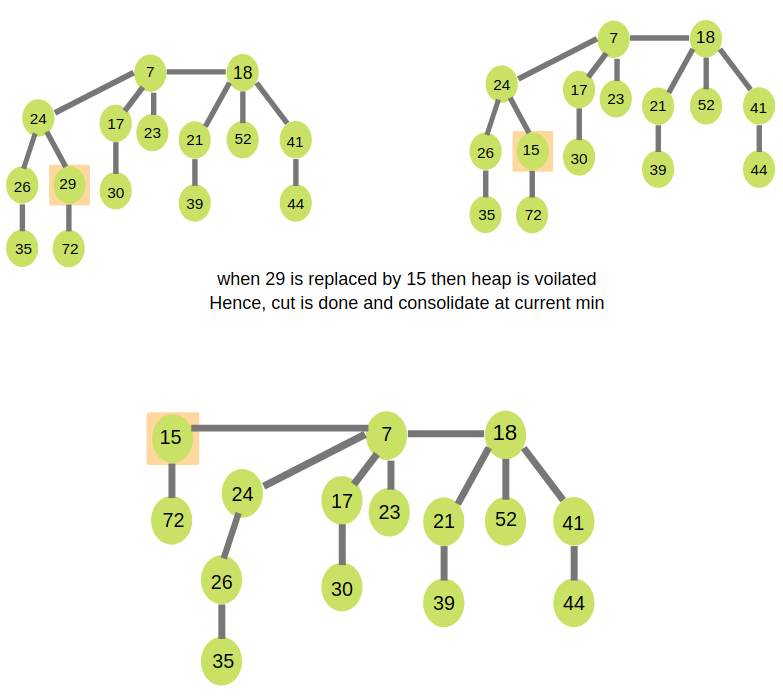 Delete is performed by calling decrease key to reduce the node to negative infinity which pulls the node to the top of the tree. Extract minimum is then called on the node to remove it from the heap.

The minimum node of a Fibonacci heap H is given by the pointer H.min, so we can find the minimum node in O(1) actual time. Because the potential of H does not change, the amortized cost of this operation is equal to its O(1) actual cost. 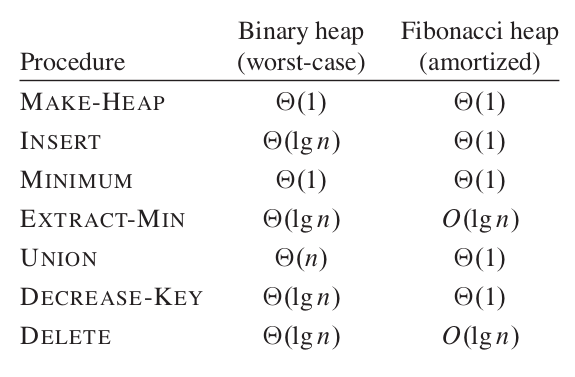 Count all the possible paths from top left to bottom right of a m x n matrix with the constraints that from each cell you can either move only to right or down. Brute force approach takes exponential time while dynamic programming takes O(M*N) time complexity