GitHub is a source code management tool that stores source code files of our projects in remote repository. In 2019, GitHub launched GitHub Action, integrated with GitHub that gives the features of CI/CD (Continuous Integration and Continuous Deployment) in an automated workflow which can be used to build, test and deploy our source code files from GitHub.

This methodology reduces chances of risk because changes are small and thus chances or errors and bugs missed in testing process are small. Also, CI increases the speed of development.

The process of CI includes following:

Automated Workflow: Whenever a workflow is said to be continuous, automation is a key principle attached with it. Continuity in flow means that the process is not stopping at any stage and is flowing smoothly.
Automation aims to minimize the human intervention for maximizing throughput and efficiency.

This happens when we automate our flow using scripts etc.

An analogy to understand the continuity in Software Development is that a build trigger is created so that whenever a team member pushes source code on a central repository, it is instantaneously merged with central repository, sent for automated testing; if the test passes, it is directly deployed to production environment else feedback is sent to all the members of the project.

Continuous Deployment: Continuous Deployment extends the idea of continuous integration by deploying the final product of the CI cycle (an executable file) to the production environment available for use by the customers after performing extensive automated testing.

Events for triggering GitHub Actions: GitHub Actions are generally triggered after a specified event has occurred, event though they may also be invoked using schedulers etc.
Following events are important and commonly used:

A general list of events has been published by GitHub here

1. Docker: Docker is a virtualization software falling under PaaS (Platform as a Service) category.
It is used for OS level virtualization: It simulates a specific OS type environment called Docker Container based on a Docker Image over the parent OS kernel of the local machine.
Docker Image is a static specification of the virtual environment we want.
Docker Containers are run time entity based on the Docker Image
Docker containers run on the Docker Engine.
Containers are lightweight virtual machines.

2. Scripting: Scripting is used to automate the workflow by defining a set of tasks that will be executed on triggers or on a specified schedule.
Various languages used for scripting are:
a. Shell Scripting
b. Python
c. JavaScript

Here, we use Shell Scripting for our GitHub Action automation.

1. Create a Dockerfile for Containerization

2. Create a Shell Script for automating the workflow

3. Define the Workflow and action in main.yml file

1. Create a Dockerfile for Containerization

GitHub Actions use Docker containers for an isolated environment because:

Here is a simplistic Dockerfile which has to be defined in action-a/ directory on the GitHub repository. 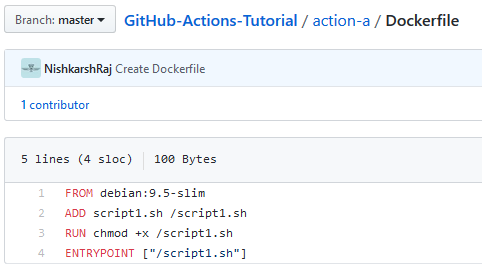 2. Create a Shell Script for automating the workflow

Shell Scripting is used in GitHub action to automate the workflow.
Here, a script1.sh file is created to print the Hello World message.

This script1.sh file is defined in Dockerfile which has to be added to Debian system.

Thus, script1.sh file is to be made in the action-a/ directory with following content:

Here, echo command is used to print the message to the standard output on execution.
MY_NAME is a variable which is not defined yet. It will be covered later. 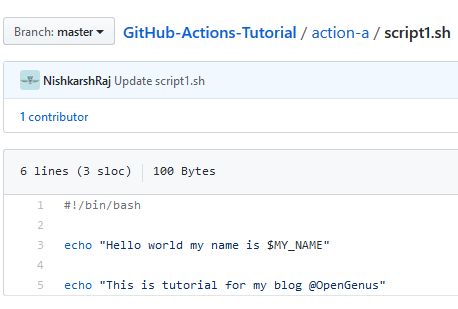 3. Define the Workflow with a push trigger

Thus, one workflow has one or more actions.
For GitHub Actions, we define the workflow and their respective action(s) in the .github/workflows directory in the main.yml file. 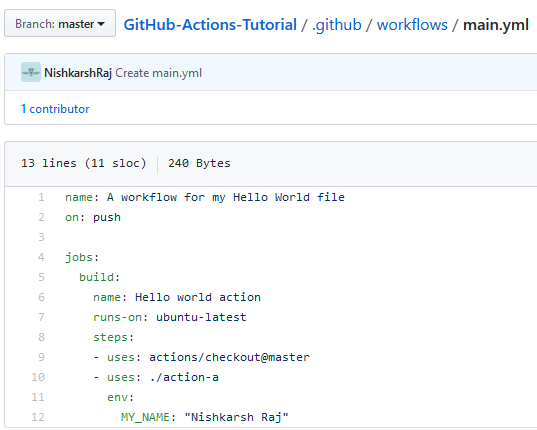 Since we have used the push event for triggering the GitHub action, pushing the main.yml file to the Git repository has already triggered the action.

To see the output, click on the Actions tab on the top bar under the GitHub Repository name on the repository homepage.

It shows the workflow name along with different actions perfomed on each push event.
Click on the latest workflow execution.

1. Set Up job: Verify the main.yml file and set up the GitHub action environment
2. Run actions/checkout@master: Configure the environment using the checkout repository of the GitHub Action official account on GitHub.
3. Run ./action-a: Create Docker Container from the Dockerfile specified in the action-a/ directory on our local repository and execute the operations.
4. Complete Job: Deallocate memory and dependencies of the container and give exit status. 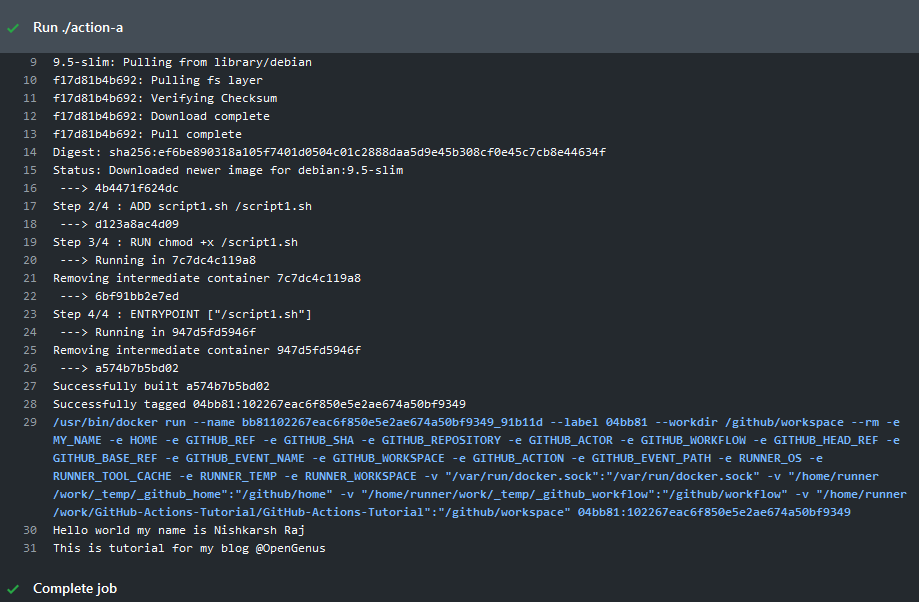 Click on Run ./action-a to see the output of the execution of shell script at end of it.

In the above example, push event triggered GitHub Action.
Here, we create a trigger whenever a pull request is made in the repository.

In the .github/workflows/main.yml file, replace the on: push command with the following line:

Thus, the workflow is now triggered by both a push event and a pull_request event.

This statement can be used to trigger GitHub action only on the Pull request event.

Now, make some changes in a new branch so that a pull request can be made to the repository.

Create a pull request from the comment branch to the master branch. 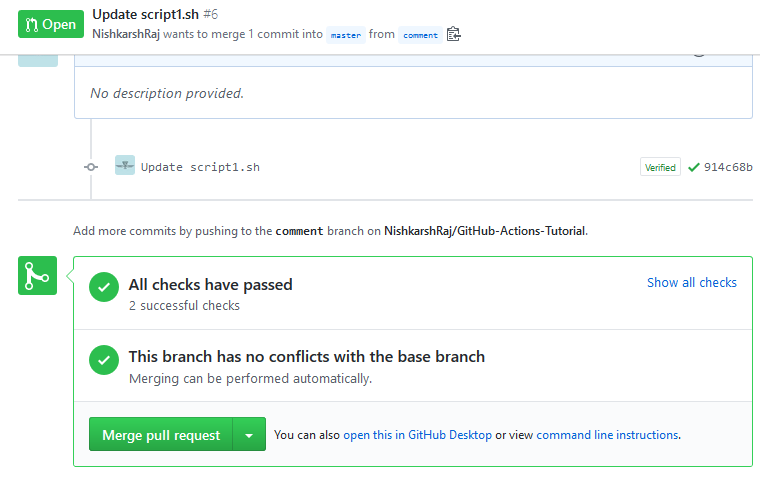 Click on Show all checks to see the detailed report.

Click on Actions tab in the toolbar to see step by step report.

As seen on the left side, our workflow has two actions, one for push event and one for the pull_request event.