Imagine you had a probelm where you were asked to find the number of unique elements in a list of data where there could be duplicates. There are 2 quick approaches one could quickly come up with. One option is simply to rely on the library's set but often times they have to deal with reisizing their array, deal with collisions, deal with equality checks. The other option would be simply to sort the list of data then simply iterate through the list and gather non-duplicates. Both of these work fine for small amount of data but when there is a large amount of data in the data set then it becomes an unfeasible approach.

Illustrated in the problem section is what is known as cardinality, where your goal is to find the number of distinct elements in set of data where duplicates can exist.

The need for a better solution was in need due to the large datasets in Big Data.

Before diving into LogLog, it's best to understand the basis of how LogLog came about.

This is the most simplest approach for cadinality where essentially. Essentially you have a bit map and hash the key then with the hash code you would find the first 1 bit starting left to right and then update the corresponding index at that bit. Now imagine, having more than 1 bit map as they will serve as buckets to lower the probability of error.

This is an example of multiple simple counters. By having more counters, the lower the error of cardinality but an increase of memory. 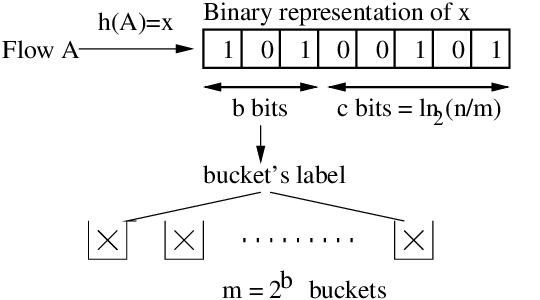 Though not mentioned in most implementations, but 32 bit binary representation is used because it covers most values generated, but for our implementation we will use 64 as that represents a long range.

Lastly, to calculate the cardinality, you would simple sum all the values in the buckets, average that value, then apply it to a stochastic formula.

For most probablistic data structures, it's heavily reliant on a hash function or another means of probablity. As for this LogLog, the hash function will heavily determine the results of cardinality.

If you aren't aware, if the hash function does not properly distribute then lots of collisions will happen. These collisions are not good because this would influence which buckets get selected and what values would be inside of them. This is definitely not what is intendd.

Obviously you should pick a good hash function. Take for example, if you had 1024 buckets, you could estimate 10^8 with a standard error of 4% where each register had 5 bits. Now the math behind this is a bit much to explain, but rather I'll put the original paper of this idea in the resources section for you to look at if you're interested. The paper was written by Marianne Durand and Philippe Flajolet.

Getting the Bucket Index

Simply you define how many buckets you want, often it's a power of 2 to make numbers nice.

You need to determine how many bits are required to get that bucket number.

This is described in the picture in the LogLog section, where the "b bits" represent bucket bits (the first X bits). Once you know how many bits are required, you get the binary representation of the hash code and you take the first X bits then find the interger value of those bits and make sure it's bounded within the range of 0 to totalBuckets-1.

This is described in the picture in the LogLog section, where the "c bits" represent bucket bits (the bits after the first X bits). After getting the bucket index, you will use the remaining bits. Ranking is the term for determining the value that a bucket will have, though definitions are slightly different for different data structures.

One common ranking method is to find the position of the first 1 bit starting left to right using the remaining bits. If unable to find the a 1, return the total numeber of bits then. Once the value and bucket is determined, pick the maximum between the value at the current bucket with the new ranking value.

There are variations on the ranking method so testing a lot is needed to ensure quality results.

This ranking is important because it will serve as the counter which the buckets store. The ranking will be used in calculating the cardinality.

Once you have enough information, the general formula to caluate the cardinality using LogLog is:

Average count is calculated by summing up all the values in the bucket then diving by the number of buckets.

Gamme function is a little complex, so I've given you a sufficent gamma value instead.

Take note, cardinality is not exact but rather an estimation.

Here is the full code. I think most of it is rather straight forward.
This application does require you to create a hash function which as suggested before, try to implement the Murmur3 Hash function as it has resulted in good performance for this data structure.

There is an improvement to LogLog which is known as HyperLogLog. The main idea is the same however calculating the cardinality is different, but has been proven to net better results.

Nonetheless, it is still important to understand the idea of how this came about and how you could modify this idea to fit your needs.

It takes a lot of playing around with and testing such as ranking algorithms, hash functions, buckets, and etc to ensure better results for your application.

In this article, we have explored how to pass a variable by reference to a function in Python. We have demonstrated the ideas by Python code snippets.

MinHash was originally an algorithm to quickly estimate the jaccard similarity between two sets but can be designed as a probabilistic data structure that quickly estimates how similar two sets are.