Lets assume you wanted to find how similar two sets are. You could simply brute force your way by going through the contents of one set and compare those elements with the other set. Sure this method can work but what if you wanted to check a bunch of other sets? This would be rather slow, especially if you are working with a lot of data.

Some of you may know this equation and how to apply it, so you may skip this section.

For those that are unfamilar with Jaccard similarity, then this will be important.

You should also know how math with sets, but I'll try my best to explain these operations.

A set is a collection of distinct elements.

The intersection between two sets results in a set that contains elements both sets A and B share in common.

The union between two sets is both sets A and B combined together and removing duplicate copies of elements.

The size of a set is the number of elements in a given set denoted by | set | .

The image above shows the equation of how to calculate the Jaccard similarity which is a numeric score to compare similarity between two sets.

Using the information above, you could work out simple sets to determine the Jaccard similarity number.

The problem stated at the beginning of the article briefly covered the idea of finding Jaccard similarity but rather in an obscure way, but nonetheless trying to find the exact value is too time consuming.

The idea behind MinHash is representing each set as a signature. A signature preserves a permutation of a bit array representation of a set. By using hash functions that simulate a permutation, the probability of collisions against all permutations results to the Jaccard similarity.

This is hard to grasp, so I will walk you through what is happening.

Not having enough hash functions will cause small amount of comparisons to properly gauge similarity between two sets due to all the values probably colliding. However, it's essential to create/use high quality distributed hash algorithms (could look them up) as it's unlikely to have a similar value during similarity comparison time. The more high quality hash functions you have, the better the evaluation of similarity will result, but there is a threshold, so you have to test your results and see.

Regardless, a hash function is the pivotal part needed but there aren't enough out there as you may want a lot. If you need more hash functions then you could use 1 hash function and go through the process of salting, which is basically rehashing a hash code over and over. Or you could create your own way to manipulate the hash code through proper bit manipulation but salting is a very easy and efficient solution. These salted hash codes would still result be good enough to act as a hash function that hashed those values.

Despite having quick performance, since hash functions are limited to a certain range of values and collisions are bound to happen, the similarity is not always accurate. I can't fully explain the error rate, however in the resource section, the L5-Minhash link has a more in-depth answer also Wikipedia states the true error rate.

This was a lot of information, the most important thing to note is that good hash functions are pivotal in the performance of this data structure as are most probablistic data structures.

So what exactly does the MinHash data structure do? Well it's an algorithm but can be converted into a data structure and I will explain the process of creating it. 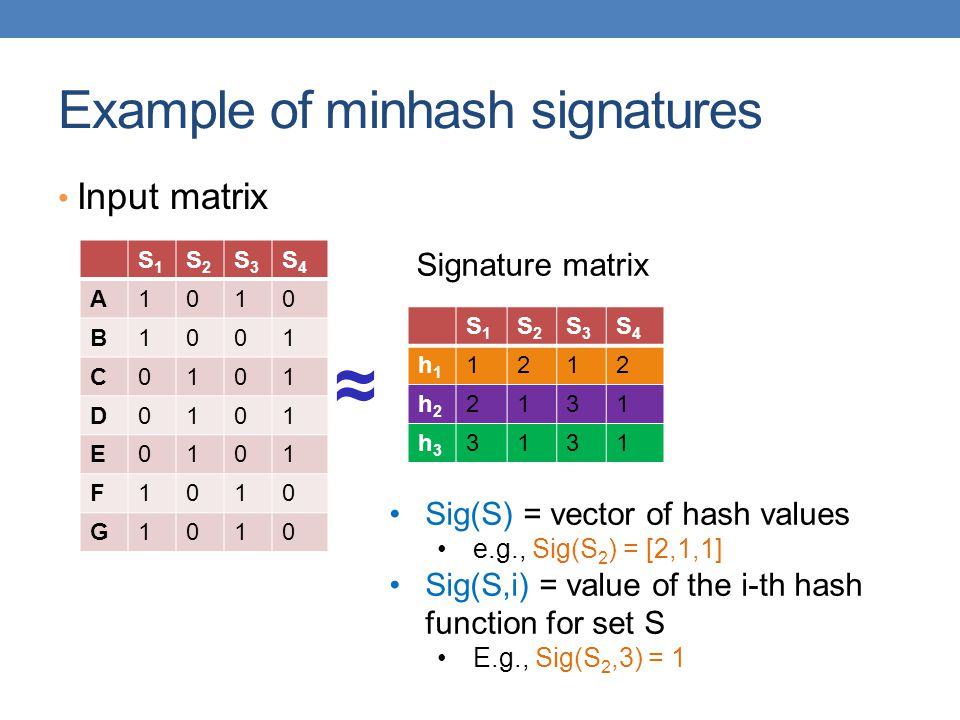 Above is the picture of the steps needed for the data structure to work. If you get confused, I will explain more in-depth the following sections.

The initial step is to build a bit array for each set, however we need to know how big to make it. In order to do so, you need to know the universal set size which is the size of the union of all sets that will be used later to compare.

Lets assume we have 3 sets

In this case, let's assume the hash code of a number is the number itself. This would result in bit arrays:

The code above is an example of how one might find the universal size of all sets unioned together.

We are simply iterating through each set and updating the bit array to represent out set.

The idea behind this method is to go through each bit array and whenever we see a non-zero value, we will update our signature matrix calling computeSigHashes function.

It's important to initialize the matrix with all maxiumum values because we will be calling Math.min function to preserve the property of a signature matrix.

Go through each hash function and the associated set index and then select the minimum value between the current value in the signature matrix and the bounded hashed index.

After building the signature table, calculating an estimate of the Jaccard similarty will be easy.

Go down each row of the matrix and compare the set index for both. If they have the same value, increment a running count.
Lastly, divide the running count by the total rows (aka total number of hash functions).

Here is the full code of all the segments, I have renamed some of the terms because originally this algorithm was developed for web searches but has since then found other applications.

This code shows you an example of sets usings numbers from 0 through 18.

LogLog is a Probabilistic Data Structure that uses the idea of hashing to compute Cardinality of a given set.