The Open Systems Interconnection (OSI) reference model is one of the most crucial networking concepts to comprehend. This conceptual model illustrates a network architecture that enables data to be transferred between computer systems. 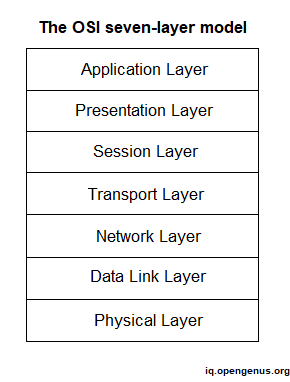 Each layer of the OSI model serves a distinct purpose. In this article, we will discuss about the functions of network layer and the protocols that are linked with it.

The network layer's principal job is routing — providing ways for data to be sent from one network system to another. The network layer does not describe how data is transferred, but rather the techniques for doing so. Routing protocols, which are software components, offer functionality at the network layer.

Protocols at the network layer are also in charge of route selection, which is the process of finding the optimum path for data to travel across the network. In comparison to the DLL, which communicates on the LAN using MAC addresses, network layer protocols connect on the network using software-configured addresses and unique routing protocols. At the network layer, the term packet refers to the logical grouping of data.

When computers were limited to isolated systems, there was minimal need for methods that allowed them to interact with one another. However, it wasn't long before the need to link computers in order to share data and printers became a must. More than a length of wiring was necessary to establish connection between network devices; a technique or set of rules was required to specify how systems would interact. That approach is provided by protocols.

It would be ideal if a single protocol allowed all devices to communicate with one another, however this is not the case. On a network, a variety of protocols can be employed, each with its own set of features, benefits, and drawbacks. The protocol you select can have a big influence on how the network operates and performs. This section delves into some of the most prevalent network layer protocols.

The network layer protocols are as follows:

Let us now discuss about these protocols in detail.

IP is a protocol that is used to transfer data from one network node to another. Because IP is connectionless, it cannot guarantee data transmission; it can only make best attempts to do so. A higher-level protocol, such as TCP, is necessary to ensure that IP communications are completed.

IP conducts fragmentation and reassembly operations for network communications in addition to offering best-effort delivery. Since the maximum transmission unit (MTU) size in IP is restricted, fragmentation is required. In other words, network messages that are too large to be sent in a single packet must be divided into smaller pieces and reassembled at the other end.

The IP can be divided into two versions:

This protocol describes a technique used by gateways and hosts to exchange control or error information. The Internet protocol offers unstable, connectionless datagram service, and a datagram travels from gateway to gateway until it reaches a gateway that can send it straight to its final destination. If a gateway is unable to route or deliver a datagram, or if it detects an unexpected circumstance, such as network congestion, that interferes with its ability to transmit the datagram, it must notify the original source to take action to prevent or fix the problem. The ICMP enables gateways to deliver error or control messages to other gateways or hosts; ICMP facilitates communication between Internet Protocol software on one system and Internet Protocol software on another.

This is a particularly unique message method that the designers incorporated into the TCP/IP protocols. This is to enable internet gateways to notify faults or offer information about unexpected occurrences. The IP protocol alone carries no information to assist the sender in testing connection or learning about errors.

ICMP simply transmits error conditions to the original source; the source should associate faults with specific application applications and take corrective action. It allows the gateway to notify the issue. It does not adequately describe the action to be performed in the event of a mistake. ICMP can only connect with the original source and not with intermediate sources.

The ICMP messages are divided into two categories:

IGMP is also a protocol of the TCP/IP. The Internet Group Message Protocol (IGMP) is a protocol used on the Internet to manage multicast group membership on IP networks. Multicast routers are used to distribute packets to all hosts that are members of a certain group. These routers receive a large number of packets that need to be sent to various groups, but they are unable to broadcast them since it would raise the network's load. To address this issue, a list of groups and their members is kept, and IGMP assists the multicast router in doing so. The multicast router maintains a list of multicast addresses for which there are network members. Each group has a multicast router that delivers the group's multicast traffic to the members of that group.

ARP's role is to resolve a system's IP address to the MAC address of the system's interface. ARP should not be confused with DNS or WINS, which also perform resolution duties but for different reasons.

Reverse Address Resolution Protocol (RARP) serves the same purpose as ARP, but in the other direction. To put it another way, it converts MAC addresses to IP addresses. RARP allows apps or systems to obtain their own IP address from a router or Domain Name System (DNS) server. Such a resolution is important for operations like executing reverse DNS lookups.

Routing is among the most fundamental aspects of networking that a network administrator must understand. Routing protocols govern how your data is routed and assist to make that process as seamless as feasible.

Routing protocols are necessary for a variety of reasons, including the following:

1. Static Routing Protocols : When an administrator manually allocates the path from the source network to the destination network, static routing protocols are employed. It strengthens the network's security.

Dynamic routing protocols can further be divided into two types:

I. Distance Vector Routing Protocol : Distance Vector Protocols use gobs of bandwidth and slow converge to publish their routing table to each and every directly linked neighbor at predefined time intervals. When a route becomes unavailable, all routing databases must be updated with new information.

II. Link State Routing Protocol : Link State Protocols provide a novel way to determining the optimum routing path. The route is computed in this protocol depending on the speed of the way to the destination and the cost of resources.

Protocols that assist data packets make their way over the Internet include the following:

Let's take a closer look at these protocols.

Routing Information Protocol (RIP) - RIP may be found in both LAN and WAN networks. It also operates on the OSI model's Application layer. There are two versions of RIP: RIPv1 and RIPv2. The RIPv1 assists you in determining network pathways based on the IP destination and hop count travel. RIPv1 also communicates with the network via broadcasting its IP table to all network-connected routers. RIPv2 is a little more advanced in that it forwards its routing table to a multicast address.

Interior Gateway Protocol (IGP) - IGRP is a distance-vector internal gateway protocol subclass. It is designed to circumvent RIP constraints. Load, bandwidth, latency, MTU, and dependability are the metrics employed. Routers commonly utilise it to share routing data inside an autonomous system. This routing system is ideal for bigger networks since it broadcasts every 90 seconds and has a peak hop count of 255. When contrasted to RIP, it aids in the maintenance of bigger networks. IGRP is also frequently used because it is immune to routing loops since it automatically updates itself when route changes occur inside the network. It also has the option of balancing traffic over equal or unequal metric cost pathways.

Border Gateway Protocol (BGP) - When modifications are made, this routing protocol delivers updated router table data. As a result, there is no auto-discovery of topology changes, requiring the user to setup BGP manually.

Exterior Gateway Protocol (EGP) - EGP is a protocol for exchanging data between gateway sites that are neighbors inside autonomous systems. This routing protocol provides a platform for routers to exchange information between domains. The EGP protocol contains known routers, network addresses, route costs, and surrounding devices.

With this article, you must have the complete idea of different Network Layer Protocols.

In this article, we are going to explore about error detection in computer networks. We will be seeing some standard error detecting codes which help in detecting errors.

In this article, we have covered the process of developing a system's components, architecture, and interfaces to satisfy end-user needs which is referred to as system design.