Why to use ISO OSI?

We use this model because of the following reason:

Now there are various functions that are undertaken to transfer data successfully from one Host to other Host. Now these functions can be divided in two parts:

It is mandatory to define and use these Functions in the model. It involves functions like:

It is not mandatory to define and use these Functions in the model.The implementation of these functions is optional in the model.

a. Encryption / Decryption
b. Checkpointing (useful while Downloading from internet)
c. Routing (Yes Routing is optional in Networking)

Benefits of ISO OSI model are:

There are seven layers in the OSI model namely:

This layer is more of the physical connections rather than networking (CS) related stuff . This layer deals with how our data, which are in bit are going to be get converted into be various kinds of signals and how these are to be transported among routers and hosts.

1. Transmission: It gives idea about type of the channels are half-duplex ,simplex, Full duplex.

3. Encoding: It gives an idea of what encoding and decoding schems should be used to convert 0’s and 1’s into signals (waves) and send them across the channels.

The most important functions implemented in this layer are:

1. Flow Control – The sending rate of data should be in such a way that reciever can recieve the packets without any loss of packets. In simple words, Flow control means the rate at which sender is sending should be somewhat sinked with the rate at which receiver can receive and process the data and If a sink is not maintained then the data packets would get lost.These Flow Control also helps in determining the algorithm in which we will repeat the process of sending the lost packets.

This Layer defines the flow controls methods that are to be used or adopted to ensure proper flow of data across the nodes(from host to reciever) (S&W or GBN or SR).

2. Error Control – Here we take care of the fact that data doesn't get corrupted while transfer , the functions are implemented which help in error detection .Algorithms like CRC and Checksum are used (either of the two algorithms are used in the implementation). The CRC (Cyclic Redundancy Check) algorithm is implemented here to detect the errors (if any might have occured).

Framing – The TCP /UDP packets are framed and sent . The task of this is to put the packets (datagrams from Network layer) received from above layers into a frame and send it. These frames have a SFD(Starting Frame Delimiter) which alert the routers that a new packet is coming.

And these packets can even have a ED (End Delimiter) when we use variable length Frames saying that the packet is over.

To mark this ED 2 strategies are used:

The DLL (Data link Layer) can be further divided into 2 parts:

This layer is a important layer but doesn't give acknowledgements when it recieves a packet successfully , this layer deals with the host-to-host connectivity, i.e., this layer is concerned about how packets are to be transferred without error from one host (sender) to other host (receiver). This Network layer uses the Logical Addressing which is unique for a device in the entire internet .

This layer also deals with Switching of the packets to reach the desired host. The Switching of Packets is done by using the Routing Tables. 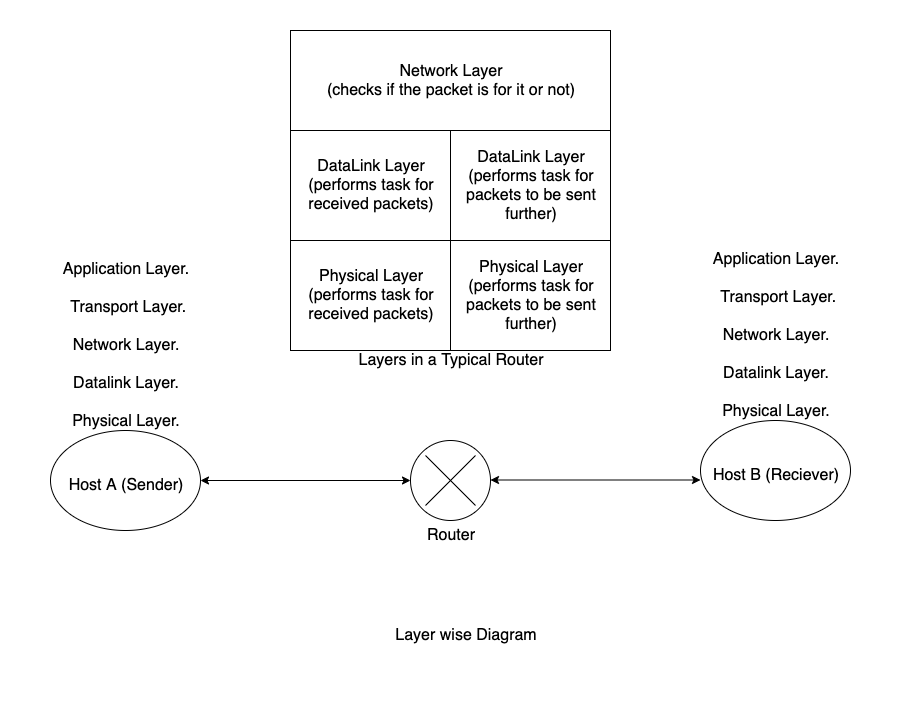 This Layer is also responsible and performs the task of Congestion control.

One more most important that this layer also performs is Fragmentation of packets , the Fragmentation is done , when the packets are to be transferred through a network which have less MTU (Maximum Transmission unit).

This is final layer responsible for all real stuff , all the rest layer implementation depends upon the application and this Layer handles the End-to-end connectivity it means this layer is important for the data packet to reach the exact port of the host . The Network Layer will bring the packet and give to host but the Transport Layer is the layer that helps the data packets to reach the designated port.

This Layer mainly deals with:

In the Presentation Layer, we can find functions implementing:

Suppose you want to connect to iq.opengenus.org.

Now the data we want to send to iq.opengenus.org will be given by application layer to Transport Layer . And now the Transport Layer will perform the Segmentation of data (if neccessary) .

The Segmentation is done that the data can go and seat easily in the Frame (will be describing it shortly). The Frame has a certaing size depending on the MTU of the Network. This MTU can be different for different networks. Now after that in Transport Layer Port number are added to the data packets .

So , it can be clearly noted that this layer is responsible for Process-to-Process communtcation among different hosts. Popular port numbers are usually available by default.

Now after that the segment(the data packet) is given to the Network Layer. Here the data packet is known as datagram. Here the IP addresses of the Sender and Reciever are added to the Data Packet. Thus, this layer is responsible for Host-to-Host communication. 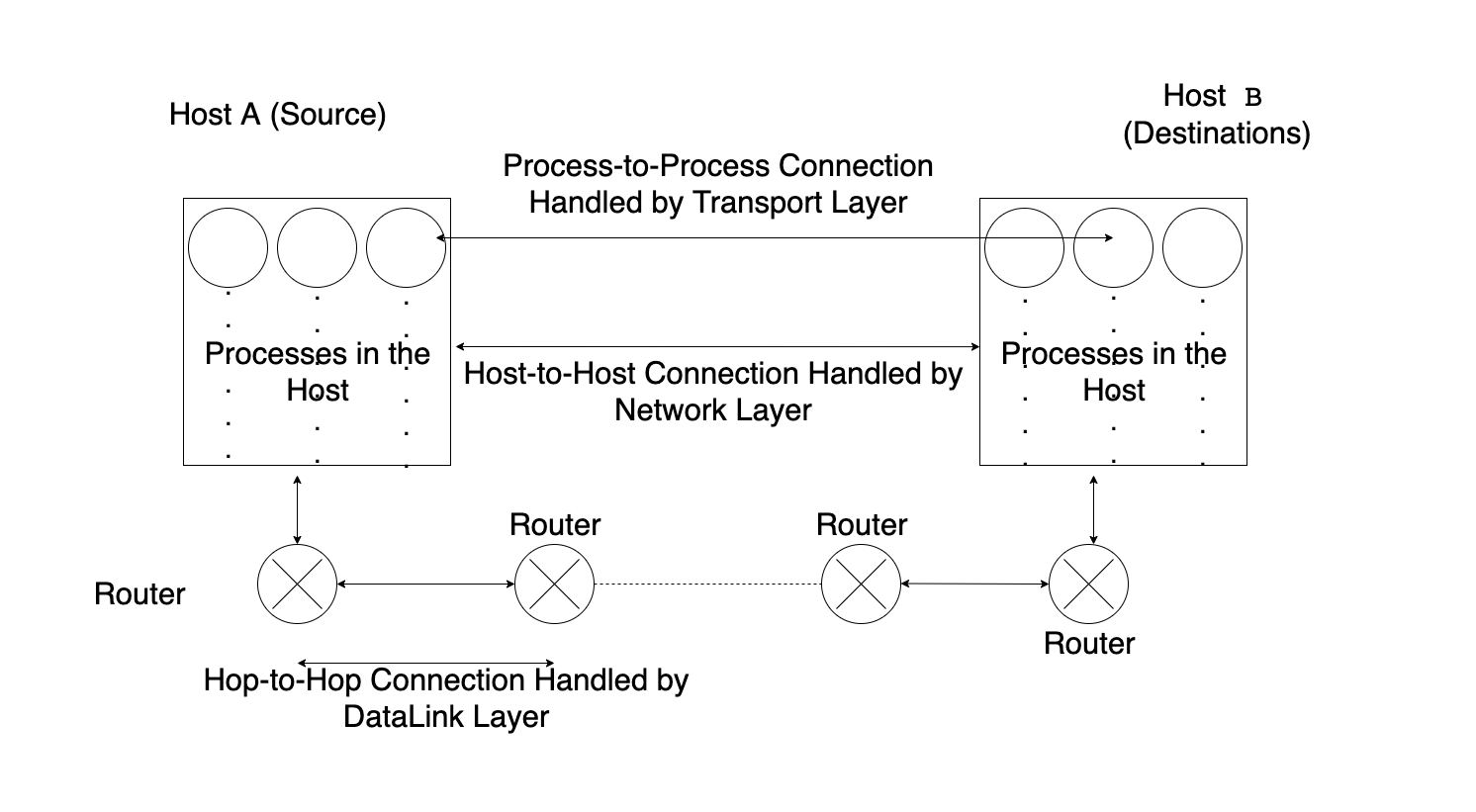 In this Layer sometimes even fragmentation of data packets is done if required . It is done so that the data packet can go and easily sit in a frame.

These all datagrams have a unique identification number and if these are futher fragmented . And each of this fragments is findout by using the fragmenation offset.

Point to be noted the fragments will be having a same identification number.

After that the Packet is given to Data Link Layer where the MAC addresses of source and destination are added.

ARP (Address Resolution Protocol) request is like saying please send me your MAC address whose IP address is this (Logically). 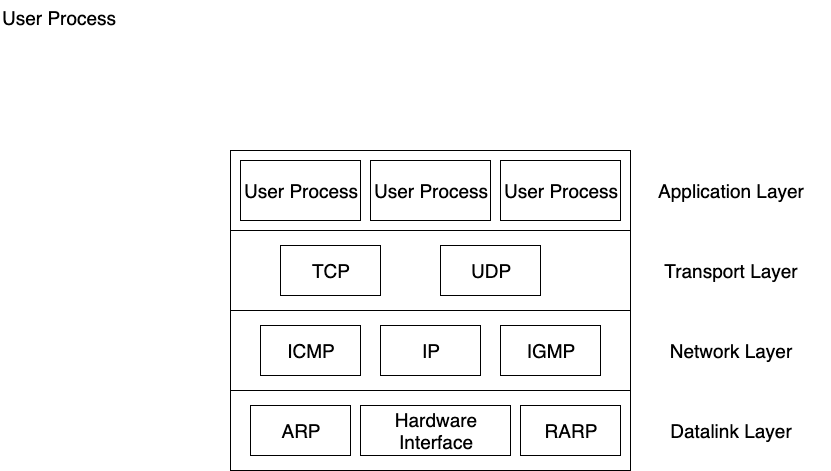 And finally after these successful step the Transport layer gives a acknowledgement to Host that the packet has been successfully delievered.

This is how overall our internet works.

We need to find the minimum number of characters to be deleted in a string to make it a palindrome. This can be done in O(N^2) time with the help of Dynamic Programming approach of Longest Palindromic Subsequence.

Java handles input and output through streams and there are multiple input and output streams specialized for different use cases like BufferedOutputStream and much more which we have explored in depth in this article at OpenGenus.