The distance vector routing protocol is one of the main protocols used for routing packets across networks. As we know, the internet is a network of networks. So, when a request is made from a network, the requested information comes in packets that travel across these networks. Usually, in these networks, the routers handle the work of directing the traffic. They handle the directions of packets. So, think of all these routers in the networks as nodes in a graph. Each router is connected to some other routers and the path through which we can reach the other router has certain costs involved with it. This path cost is shared by each router with its neighbors. Each router creates a distance vector table that contains information about the routers in the network, specifically, the cost associated to reach every router from this particular router (this is the cost of the path that the packet may take to travel). In the final distance vector table of every router, to reach the other routers, we would only choose those paths that have the least cost associated with them. Consider the example of a network shown below. 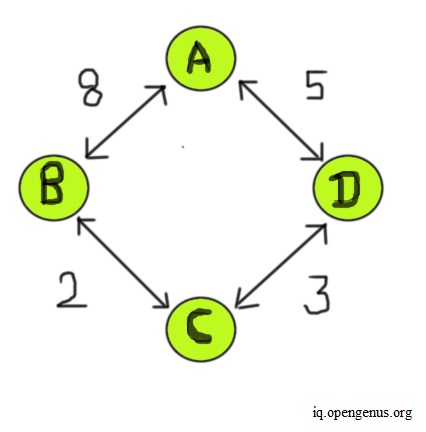 Sometimes there can be cases where a particular path to reach the other router may become unreachable. A router may have some trouble accessing that path. So, in the distance vector table, we set the cost of reaching such routers as infinity. The router updates its distance vector and informs its neighbors of such changes. There are cases when situations like these could lead to a problem called counting to infinity. 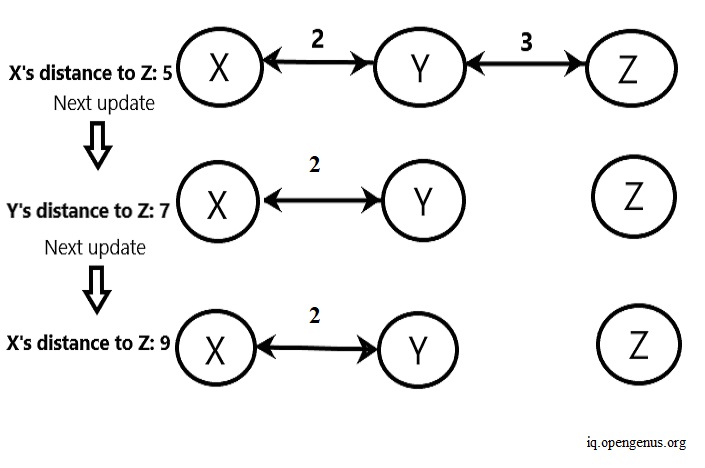 In the example shown above, router X takes the path to reach Z through Y. X to Y costs two, and Y to Z costs three, giving us a total cost to Z from X as five. Consider a scenario where the connection between router Y and router Z breaks. So all paths to router Z become invalid. In the next update, the router Y sees that router Z costs five from router X, and if we fail to update this, router Y uses the router X to reach router Z. Reaching router X costs two to router Y, and the invalid path costs router X five to reach router Z. This way, we wrongly update the path cost from router Y to router Z as seven (5+2). Now, router X sees that Z costs seven from router Y. It takes this invalid path and wrongly updates its path cost to Z as nine because it takes two to reach Y from X and Y takes seven to reach router Z. This cycle of wrong updates to the distance vectors continues.

We can see that router Z is not accessible for both router X and router Y. But, if Y doesn't inform X that the path to Z is inaccessible, and X continues to use the path to Z from Y, then it can lead to overcounting of costs and using paths that don't even exist in the network.

Solutions to Counting to Infinity

Usually, we use the Bellman-Ford algorithm for distance vector protocols.

To implement the Bellman-Ford algorithm and see how it works, follow the steps mentioned below-

Let’s examine the code example above to understand how the Bellman-Ford algorithm and distance vector work. 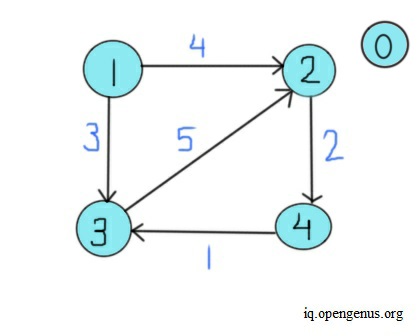 In the example, we create a graph containing five vertices. Now, we add edges one by one. We insert an edge running from vertex 1 to vertex 2, with four as weight. Then, we insert an edge from 1 to 3, weighing three, and from 2 to 4, with two as weight. Lastly, we insert two edges, from 3 to 2 and 4 to 3, having five and one as weights, respectively. Next, we call the bellman_ford function and pass vertex 1 as the source node. Initially, the algorithm sets the distance/ weight/ cost of paths from node 1 to every other node as infinity. The distance of node/vertex 1 from itself remains zero. Now, we check each edge one by one for a total of V-1 times. We check the edge running from vertex 1 to 2. The value of dist[1] is zero, and dist[1] plus a weight of four is less than dist[2]. As dist[2] is infinity, we set dist[2] as equal to four. Next, we check the edge from vertex 1 to vertex 3. 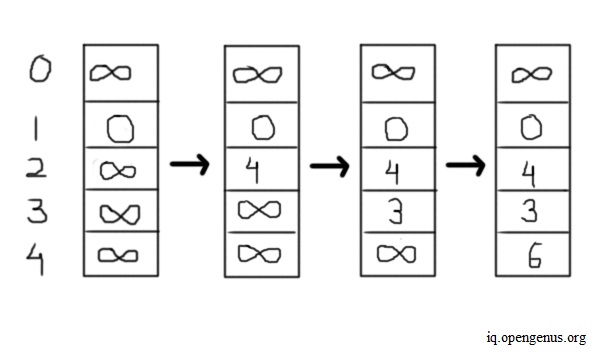 After checking all edges V-1 times, we exit the current loop and go to the final loop. In the last loop, we check for negative edge cycles. There isn't any such cycle in this case, so we exit this loop. Lastly, we print the distance of each vertex from the source node.

How it all works

As explained in the beginning, the distance vector algorithm mainly does the following -

Let’s see how the entire process works and how the distance vector table updates for each node in a network. For this, consider the previous example where we had four routers in a network, named A, B, C, and D, respectively. 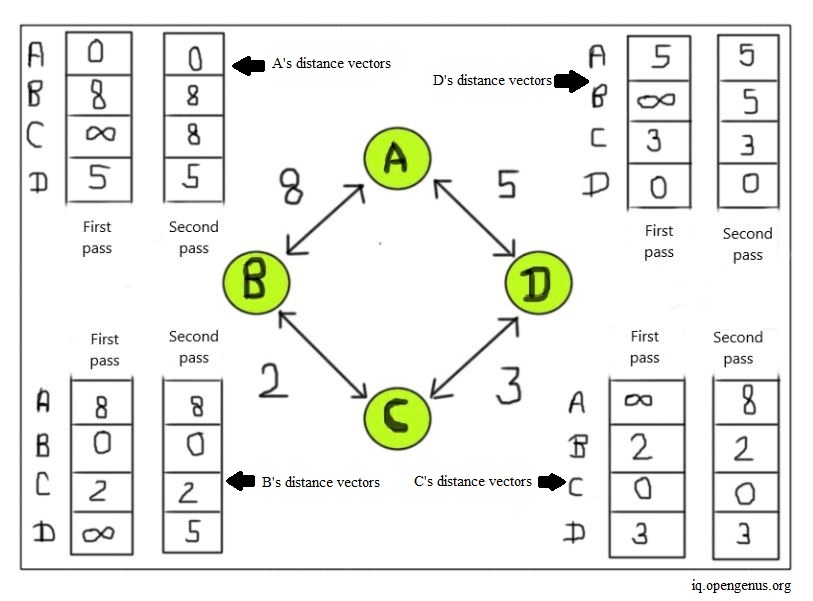 We first begin with router A's distance vector. As we can see in the image below, router A initially contains path information only about its neighboring routers. So, the cost of routers that are not its neighbors is set as infinity. In this first pass of the distance vector for router A, we have a path to reach routers B and D, but not C. Parallelly, we repeat this same process for all routers in the network.

With this article at OpenGenus, you must have the complete idea of Distance Vector in Computer Network.

DevOps trends that will rule the Software Industry in the coming few years.

In this article, we have explored algorithms to Find the longest sequence of consecutive ones when at most k zeros can be altered to 1. This involve techniques like Sliding Window approach.