In this article, we have explained an efficient approach to Swap adjacent nodes in a Singly Linked List inplace. We have presented both Iterative and Recursive implementation.

This is similar to Leetcode Problem 24. Swap Nodes in Pairs.

Before we begin we should know that we need to swap pointers/references not the values of each node so the value of each node remain the same.

We need to return a pointer to the head of this:

Each node has a value and a pointer to the next node.

Before we solve, at the first thought you might say that, just swap pointers so that make 2 points to one and 4 points to 3 . Is it your first thought?
Let me tell you a problem here, if we change the 2 pointer to 1 we forgot that 1 also refering to 2 , so we're having some kind of circular referencing/pointers.

Then that doesn't work 😕.

Our approach to solve this problem is to fix this circular referencing in addition to some extra work. 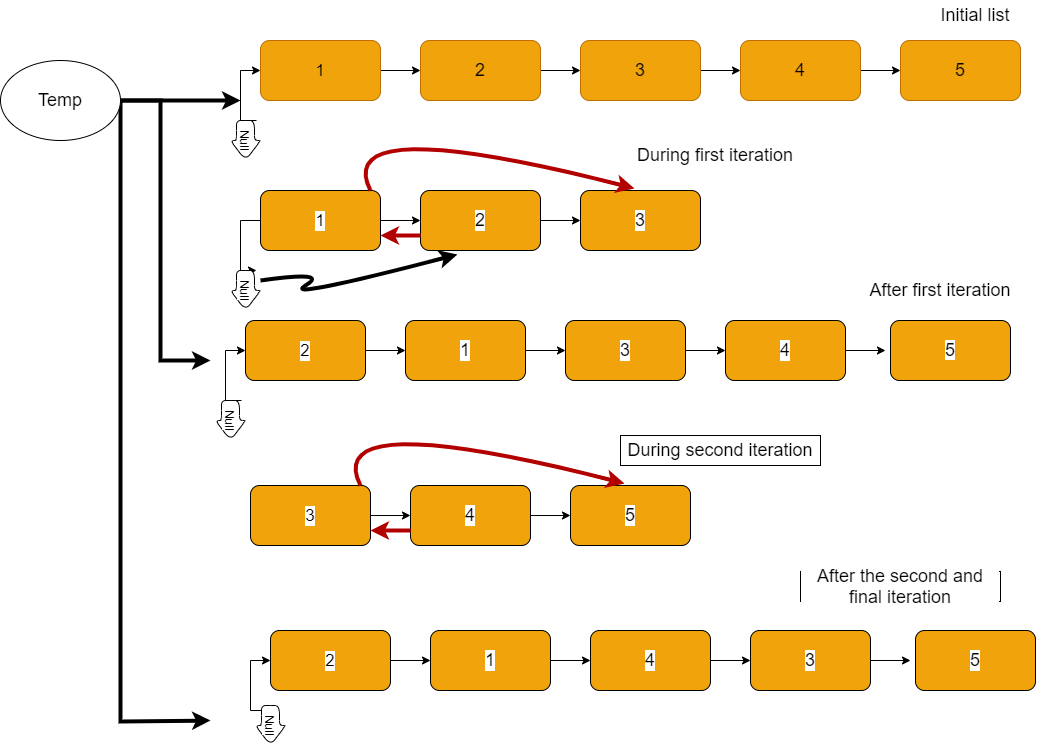 Temp is a pointer to the initial position of the head(temp.next=head_init_pos), whether the head changes its position, it still pointing to that initial position. That's for returning the whole list, if we returned the head then we will returning a list without the first element which will be the 2 in this case as the head is always 1.

Following is the implementation of the Iterative solution in Python:

The runtime complexity of this solution is linear O(n), practically it won't iterate the whole list.

Following is the implementation of Recursive approach in Python:

The Time Complexity is O(N). It is same as Iterative approach.

With this article at OpenGenus, you must have the complete idea of how to Swap Nodes in Pairs in a Singly Linked List efficiently.

In this article, we have explained three approaches to solve the Shortest Superstring problem. This involve concepts like DFS and Dynamic Programming.

In this post, we will design a Data Structure that returns the string occurring maximum and minimum times in constant time O(1). This will use a hashmap and a doubly linked list utilizing the advantages of each to solve the problem.