A Union Find data structure(also called disjoint-set) is a data structure that keeps track of elements partitioned into a number of disjoint(non-overlapping) subsets.
It provides near-constant-time operations to add new sets, to merge existing sets, and to determine whether elements are in the same set.

Union Find data structure can be implemented by:

Here the basic idea is to represent a set as a linked list, use the list tail as ID of the set. 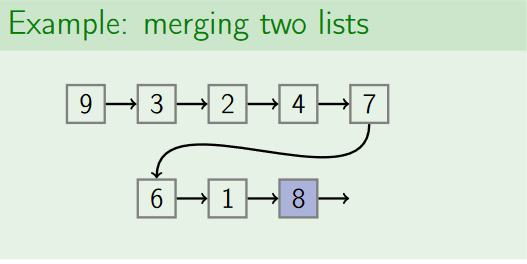 Here we represent each set as a rooted tree. ID of a set is the root of the tree. We use array parent[1...n]:where parent[i] is the parent of i, or i if it is the root. 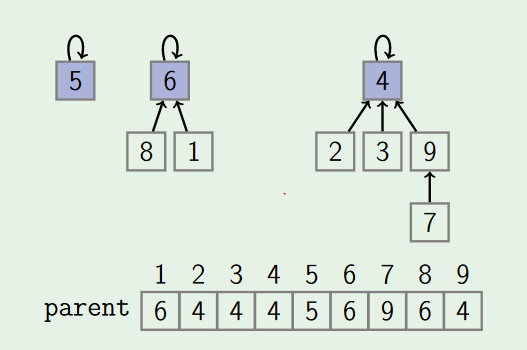 The MakeSet operation makes a new set by creating a new element with a unique id.So for n elements it creates n individual sets. 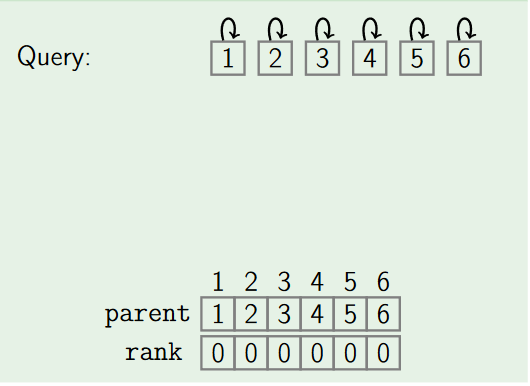 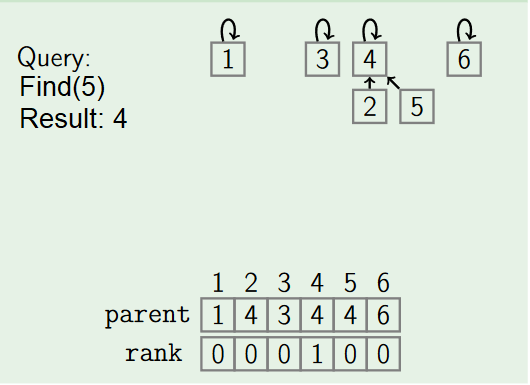 Path compression flattens the structure of the tree by making every node point to the root whenever Find is used on it. This is valid, since each element visited on the way to a root is part of the same set. The resulting flatter tree speeds up future operations not only on these elements, but also on those referencing them. 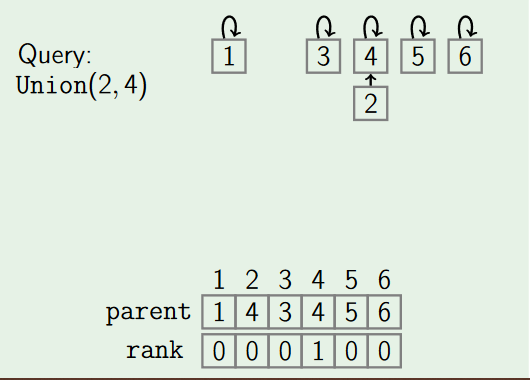 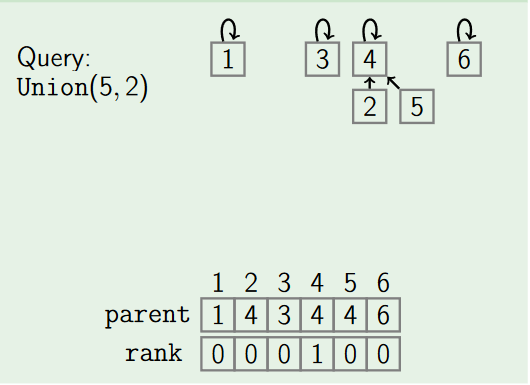 Union by rank always attaches the shorter tree to the root of the taller tree, thus the resulting tree is no taller than the original unless they were of equal height.
To implement this we assign rank to each element of set, initially the set have one element having rank zero. If two sets are unioned together and have different ranks then the resulting set's rank is larger of the two; otherwise, if two sets are unioned and have equal rank then the resulting set's rank will be one larger. Here we use rank instead of height because height of the tree will be changed by path compression over time.

Time Complexity
Without path compression (or a variant), union by rank, or union by size, the height of trees can grows unchecked as O(n), implying that Find and Union operations will take O(n) time where n is total number of elements.

Using union by rank alone gives a running-time of O(log2n) (tight bound) per operation(for both Find and Union).

Using both path compression and union by rank or size ensures that the amortized time per operation is only O(log*n) (read as log star n which is inverse Ackermann function), which is optimized(for both Find and Union).
O(log*n) is much better than O(log n), as its value reaches at most up to 5 in the real world.

We learned that we can reduce its complexity to a very optimum level, so in case of very large and dense graph, we can use this data structure.

Sieve of Atkin is an algorithm used to find all prime numbers upto a given number (say N) and does so in O(N) time complexity. With a modified version with enumerating lattice points variation, the time complexity goes to O(N / log log N). It is computationally efficient than Sieve of Eratosthenes

The flow of control jumps from one part of the program to another, depending on calculations performed in the program. Program statements that cause such jumps are called control statements. We have covered for, while, do while loop, if else, switch, break, continue, goto and functions.