The most popular way of developing software is ‘THE CLASSICAL WATERFALL’ model. It is the first Software Development Life Cycle (SDLC) model, introduced to describe the software development, in late 1950 and became popular in the 1970s by the first formal description of the waterfall model cited in an article by Winston W. Royce the term “waterfall” was coined by Bell and Thayer in 1976. 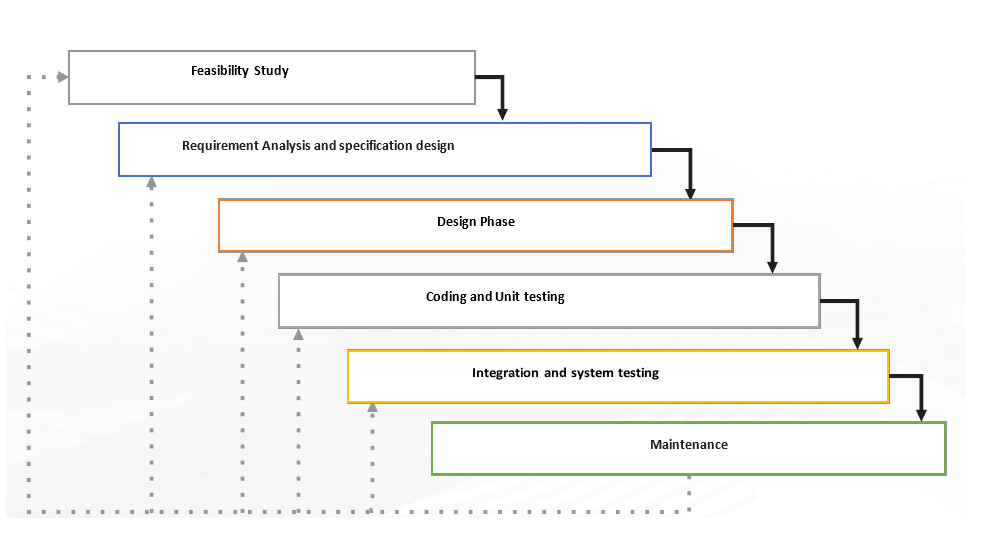 Explanation of Classical Model of Waterfall

In the “The Waterfall” approach, the whole process of software development is divided into separate phases. The outcome of one phase acts as the input for the next phase sequentially. This means that any phase in the development process begins only if the previous phase is complete. The waterfall model is a sequential design process in which progress is seen as flowing steadily downwards (like a waterfall) through the phases of Conception, Initiation, Analysis, Design, Construction, Testing, Production/Implementation, and Maintenance.

As the Waterfall Model illustrates the software development process in a linear sequential flow; hence it is also referred to as a Linear-Sequential Life Cycle Model.

The following activities are covered during the feasibility study phase.

The main aim of the feasibility study is to determine whether it would be financially and technically feasible to develop the product. At first project managers or teams, leaders figure out a rough understanding of what is required to be done by visiting the client. They study different input and output data to be produced by the system. They study the required processing to be done on these data and look at the various constraints and effects on the behavior of the system. After understanding the problem(if any) they investigate the different available solutions.

Based on this analysis they pick the best solution and determine whether the solution is feasible financially and technically. They check whether the customer budget would meet the cost of the product and whether they have sufficient technical expertise in the area of development. The following is an example of a feasibility study undertaken by an organization. It is intended to give you a feel for the activities and issues involved in the feasibility study phase of a typical software project.

The following activities are carried out during the requirements analysis and specification design phase.

The requirements analysis and specification phase aims to understand the exact requirements of the customer and to document them properly. This phase consists of two distinct activities-

The following activities are covered during the design phase.

The two phases of design are:

High-Level Design (HLD) includes disintegrating a framework into modules and speaking to the interfaces and invocating connections among modules. An HLD is alluded to as programming engineering. An HLD report will normally incorporate a high-level design graph delineating the parts, interfaces, and systems that should be additionally determined or created. The archive may likewise portray or generally allude to work processes and additionally information streams between part frameworks.

LLD, also known as detailed design, is used to design the internals of the individual modules identified during HLD i.e. data structures and algorithms of the modules are designed and documented. Program specifications are covered under LLD. LLD elaborately describes every module so that the programmer can directly code the program based on it. There will be at least one document for each module. The LLD will contain

The following activities are covered during the code and unit testing phase.

This stage is also called the implementation phase. This stage involves the coding and unit testing of software development and to translate the software design into source code. Each component of the design is applied as a program module. The end-product of this phase is a set of program modules that have been being tested individually to ensure the correct working of all the individual modules. The testing of each module in isolation is the most ideal way to debug the errors at this stage.

The following activities are covered during the integration and system testing phase.

Once the modules have been coded and unit tested, the Integration of different modules is undertaken. During the integration and system testing phase, The modules are integrated in a planned manner. The different modules making up a software product are rarely integrated into one shot. Integration is normally carried out progressively over several steps. During each integration step, the partially integrated system is tested and a set of previously planned modules are added to it. Finally, when all the modules have been successfully integrated and tested, system testing is carried out to ensure that the developed system conforms to its requirements laid out in the SRS document.

This is a level of software testing where a complete and integrated software is tested. The various tests may include

System testing is normally carried out in a planned manner according to the system test plan document.

The system test plan identifies all testing related activities to be performed, mentioning the schedule of testing, and defining the resources. This step also includes all the test cases and the expected outputs for each test case. After integrating the unit tested code, it is made sure that it works well, as expected and error-free. All the functional and non-functional testing activities are performed to check whether the system meets the requirement perfectly.
The progress on testing is tracked through tools like traceability metrics, ALM. Finally, the progress report of testing activities is prepared.

The following activities are covered during the system deployment and maintenance phase.

Once the functional and non-functional testing is completed, the product is deployed in the customer environment or released in the market.

Maintenance of any software product requires many efforts than the efforts put in to develop the product. Researches confirm that the relative effort of the development of a typical software product to its maintenance effort is roughly in the 40:60 ratio.

Maintenance involves performing any one or more of the following three kinds of activities:

The central idea of the waterfall model is to spend the majority of time, money and effort upfront: 20-40% in the first two phases, 30-40% on coding/development, and the rest during implementation and maintenance.

The source of the defects can be many: due to oversight, wrong assumptions, use of inappropriate technology, communication gap among the project engineers, etc.

With this, you have the complete idea of Waterfall model of Development. Enjoy.

Model Driven Architecture (MDA) is an effective design approach that is taken by developers to capture the project requirements, plans and implementation design and follow it to implement the system.

The basic operations of a version control system are Create, Checkout, Commit and Update, Add, Edit and Delete, Rename and Move, Status, Diff and Revert, Log and Tag, Branch and Merge, Resolve and Lock.