In this article, we have explained how to add any two positive numbers using the bitwise operators like and, xor, and left shift operators rather than using the normal addition operator (+).

The various bitwise operators are given below

Let's take an example and see how each of these operators work.

Consider 2 decimal numbers a and b.

1. Bitwise And - The Bitwise and returns 1 only if both the bits are 1.

3. Bitwise Not - The Bitwise not returns the complement of the bit.

4. Bitwise Xor - The Bitwise xor returns 1 only if one of the bits is zero.

In the above image, we can see that three 0s have been added on the right side i.e. after the Least significant bit, causing the shift towards the left side.

In the above image, we can see that three 0s have been added on the left side i.e. after the Most significant bit, causing the shift towards the right side.

Now since we have got the idea of how the bitwise operators work, let's move on to adding two numbers without the addition operator.

Let's first take a look at how addition takes place at the binary level and understand it before trying to do it with bitwise operators.

The binary addition is pretty similar to usual addition. From the above example, we can understand that

And another important point to note is that when we get 10, 1 is taken over to the carry and 0 is kept at the bottom itself. 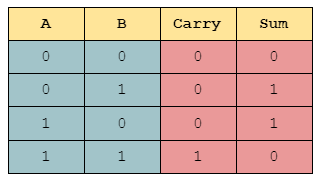 From the truth table, we infer that

Using the above two expressions the addition of any two numbers can be done as follows.

.
The whole idea behind this code is that the carry gets added again with the sum value. So what we do is we find the value of the carry separately using the expression a & b and use it again to find the sum. We keep on doing this till the carry value becomes 0.

Another important point to note here is that we shift the carry towards the left by 1 bit. That's because the carry value is added to the next bit rather than the current bit. Take a look at this image to get a better understanding.

We keep on repeating this process till the carry value i.e. a & b becomes 0 . And finally, we get the required sum of the two numbers.

Adding the numbers using the bitwise operators can also be done in a recursive manner. The same logic takes place but instead of a loop, we use a recursive function to do the Addition.

Given a number M, the number of bits N is equal to logM. So, adding two numbers M is not a constant time O(1) operation. It takes log(M) time. Base of log is 2.

Bitwise operations are an integral part of any programming language and having a good understanding of them will help you become a better programmer. With this article at OpenGenus, you must have a strong idea of addition using bitwise operation.

We have presented advanced interview questions on TensorFlow with multiple options to choose from. Select an answer to find out if you got it right and get explanation for the answer.