What is Memory?
Memory is a collection of small units called Bytes. It is used to store data, like programs, images, audio, etc. Managing memory in a C program is very interesting as it tests the intellect of the programmer in managing work even with limited memory.

How does a C program uses Memory?
For a C program, the memory is divided into 3 parts: 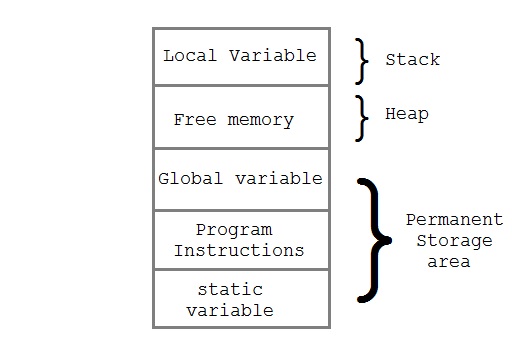 The memory allocated during the runtime is called Static Memory.

The memory allocated is fixed and cannot be increased or decreased during run time.

The memory allocation and deallocation is done by compiler automatically.

The process of allocating memory at the run time is known as Dynamic memory allocation.

The memory space that is located between Stack and Permanent storage area, which is called Heap, is used for Dynamic memory allocation during the execution of the program.

Here, the size of the heap keeps changing when the program is executed due to creation and death of variables that are local to functions and blocks.

Everything is done during Run-time or Execution-time.

Memory size can be relocated if needed.

There is no memory wastage.

The malloc function reserves a block of memory of specified size and returns a pointer of type void.We can assign it to any type of pointer.

EXAMPLE:
x=(int *) malloc(100 *sizeof(int));
Here, a memory space equivalent to "100 times the size of an int" bytes is reserved and the address of the first byte of the memory allocated is assigned to the pointer x of type of int.

It can also be used to allocate the space for complex data types such as Structures.

Remember, the malloc allocates a block of contiguous bytes. The allocation can fail if the space in the heap is not sufficient to satisfy the request. If it fails, it returns a NULL.

It is normally used for storing the derived data types such as Arrays and Structures. It allocates multiple blocks of storage, each of the same size, and then sets all bytes to zero.

It allocates contiguous space for n blocks, each of size elem-size bytes. All bytes are initialized to zero and a pointer to the first byte of the allocated region is returned. If there is not enough space, a NULL pointer is returned.

As already used memory is physically used by our system, as a programmer it is our responsibility to release that block of memory at the end of the program or when it is no longer required. It is very important when the storage is limited.

In between the program execution, it is very likely to be the case when we do not require the allocated memory. So we can free/release that block of memory for future use, using the free function. Using this feature, brings out the optimality in the program.

Here, ptr is a pointer to a memory block, which has already been created by malloc or calloc.

Use of invalid pointer may cause system crash.
Points to remember:

It is likely that we later want to change the previously allocated memory as it was not sufficient. Also it can be possible that the memory size already allocated is much larger tha necessary and we want to reduce it. For both the purposes, we can use the function realloc.
EXAMPLE:
Original allocation was-
ptr=malloc(size)
then reallocation of space may be done by-
ptr=realloc(ptr, newsize);

With this article at OpenGenus, you must have a clear idea of Dynamic vs Static memory allocation in C.

We have explained how to delete an array or delete an element in an array in C++. We can covered the case of static and dynamic memory allocated array along with the basics of array.

In this article, we will see how to add any two positive numbers using the bitwise operators like and, xor, and left shift operators rather than using the normal addition operator (+).