Even though Bloom Filters are quite efficient, the primary downside is its probablistic nature. This can be understood with a simple example. Whenever a new element has to be searched in a List, there are chances that it might not be entirely in the list while similar chances are there that it might be in the set. If there is the possibility of the element in the set, then it could be a false positive or true positive. If the element is not entirely present in the set, then it can be remarked as true negative. Due to its probablistic nature, Bloom Filter can generate some false positive results also which means that the element is deemed to be present but it is actually not present. The point to be remarked here is that a Bloom Filter never marks a false negative result which means it never signifies that an element is not present while it is actually present.

Understanding the Concept of Hashing and Bloom Filter

To understand the concept of Bloom Fliter, we must first understand the concept of Hashing. Hashing is a computational process where a function is implemented which takes an input variable and it return a distinct identifier which can be used to store the variable. What makes Hashing so popular is that it is quite simple to implement and it is much more efficient compared to the conventional algorithms for performing various operations such as insertion and search.

Unlike other Data Structures, Deletion Operations is not possible in the Bloom Filter because if we delete one element we might end up deleting some other elements also, since hashing is used to clear the bits at the indexes where the elements are stored.

When a Bloom Filter is initialized, it is set as a Bit Array where all the elements are initialized to a default value. To insert an element, an integer value is needed which is hashed using a given Hash Function a given number of times. The bits are set into the Bit Vector and the indexes where the elements are added are intialized to 1.

The Search Operation in a Bloom Filter is also performed in the same manner.

To insert an element into the Bloom Filter, every element goes through k hash functions. We will first start with an empty bit array with all the indexes intialized to zero and 'k' hash functions. The hash functions need to be independent and an optimal amount is calculated depending on the number of items that are to be hashed and the length of the table available with us.

The values to be inserted are hashed by all k hash functions and the bit in the hashed position is set to 1 in each case. Let us take some examples: 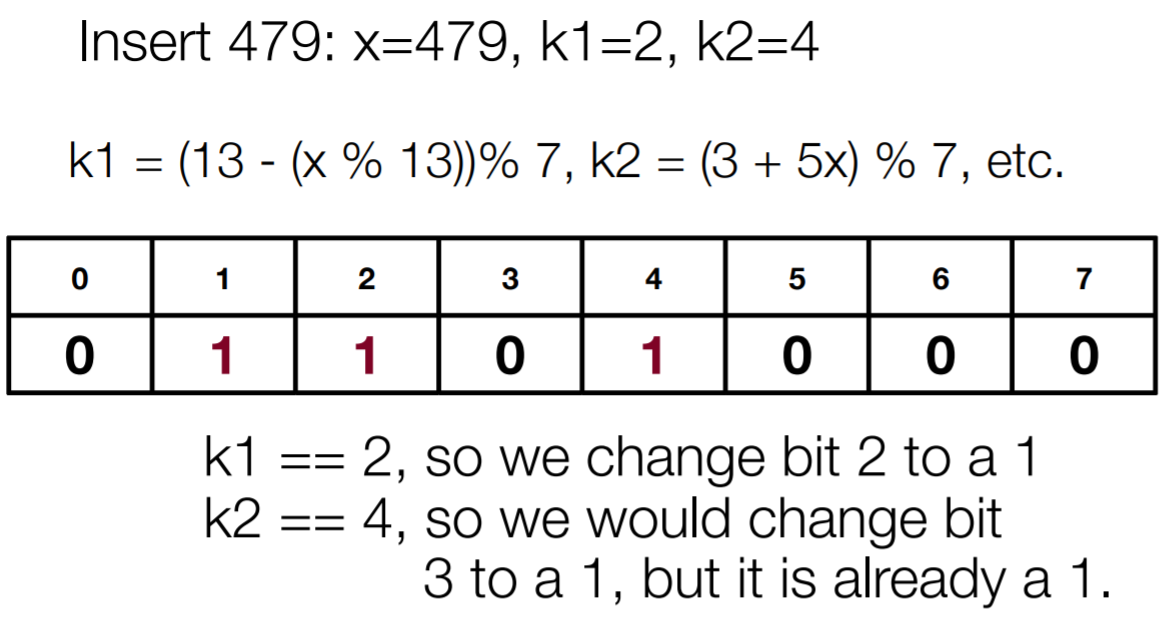 To check if an element is already present in the Bloom Filter, we must again hash the search query and check if the bits are present or not. Let us take an example:

The pseudocode for insertion of an element in the Bloom Filter is as follows:

The pseudocode for searching an element in the Bloom Filter is as follows:

With this, you will have the complete knowledge of Bloom Filter. Enjoy.

We have explored the applications of Bloom Filter which includes weak password detection, use in Internet cache protocol, safe browsing in Google Chrome and much more.

In this article, we will explore everything about variables in JavaScript. In JavaScript, a variable can be declared in 3 ways (var, let, const) and the variable scope depends on this.