The Bron–Kerbosch algorithm is an enumeration algorithm for finding maximal cliques in an undirected graph. That is, it lists all subsets of vertices with the two properties that each pair of vertices in one of the listed subsets is connected by an edge, and no listed subset can have any additional vertices added to it while preserving its complete connectivity.
The Bron–Kerbosch algorithm was designed by Dutch scientists Coenraad Bron and Joep Kerbosch, who published its description in 1973. 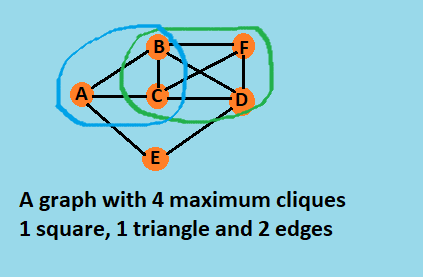 The Bron–Kerbosch algorithm is not an output-sensitive algorithm. Unlike some other algorithms for the clique problem, it does not run in polynomial time per maximal clique generated. However, it is efficient in a worst-case sense: by a result of Moon & Moser (1965), any n-vertex graph has at most 3n⁄3 maximal cliques, and the worst-case running time of the Bron–Kerbosch algorithm (with a pivot strategy that minimizes the number of recursive calls made at each step) is O(3n⁄3).

The algorithm maintains three disjoint sets of nodesR, P, X. Set R stands for the currently growing clique; set P stands for prospective nodes which are connected to all nodes in R and using which R can be expanded; set X contains nodes already processed i.e. nodes which were previously in P and hence all maximal cliques containing them have already been reported. An important invariant is that all nodes which are connected to every node of R are either in P or X. Purpose of X is to avoid reporting the same maximal clique multiple times, through the update P = P − {ui}. To avoid reporting cliques which are not maximal, the algorithm checks whether set X is empty, if X is non-empty, the nodes in X may be added to R, but this would yield previously found maximal cliques.

With pivoting
The basic form of the algorithm, described above, is inefficient in the case of graphs with many non-maximal cliques, it makes a recursive call for every clique, maximal or not. To save time and allow the algorithm to backtrack more quickly in branches of the search that contain no maximal cliques, Bron and Kerbosch introduced a variant of the algorithm involving a "pivot vertex" u, chosen from P (or more generally, as later investigators realized, from P ⋃ X). Any maximal clique must include either u or one of its non-neighbors, for otherwise the clique could be augmented by adding u to it. Therefore, only u and its non-neighbors need to be tested as the choices for the vertex v that is added to R in each recursive call to the algorithm.

With vertex ordering
An alternative method for improving the basic form of the Bron–Kerbosch algorithm involves forgoing pivoting at the outermost level of recursion, and instead choosing the ordering of the recursive calls carefully in order to minimize the sizes of the sets P of candidate vertices within each recursive call.

The degeneracy of a graph G is the smallest number d such that every subgraph of G has a vertex with degree d or less. Every graph has a degeneracy ordering, an ordering of the vertices such that each vertex has d or fewer neighbors that come later in the ordering; a degeneracy ordering may be found in linear time by repeatedly selecting the vertex of minimum degree among the remaining vertices. If the order of the vertices v that the Bron–Kerbosch algorithm loops through is a degeneracy ordering, then the set P of candidate vertices in each call (the neighbors of v that are later in the ordering) will be guaranteed to have size at most d. The set X of excluded vertices will consist of all earlier neighbors of v, and may be much larger than d. In recursive calls to the algorithm below the topmost level of the recursion, the pivoting version can still be used.

Centroid Decomposition is a divide and conquer technique which is used on trees. Given a tree with N nodes, a centroid is a node whose removal splits the given tree into a forest of trees, where each of the resulting tree contains no more than N/2 nodes.