Build is the process of creating a working program for a software release. It is achieved by taking relevant source code files and further compiling them to create a build artifact (like : executable).

1. Write and commit bits of code

As a measure of safe-keeping the Build, the code is generally committed or uploaded to a central source code repository. Multiple versions of the source code will be available in this repository for reference at any point in time. To prevent any Data loss, due to system crashes or other unforeseen situations, the code is not kept in the individual’s system for longer time periods. The pieces of code are committed to the repository, as soon as it is complete.

2. Scan the code for problems

After the code is committed to the repository, then it is scanned for common bugs. Based on the programming language used, multiple tools are available for scanning the code. These scanners automatically monitor the code before it is deployed.

During the compilation process, the code is compiled to create working components of the application for various devices. The scripts can also be used to create Database Tables, Test Data and stored procedures.

Here, scripts are used to load the browser, land on a web page, and test the usability of features on that page. No manual intervention is needed during this phase. Automated tests run daily, ensure high-quality applications. There are hundreds of automated tests available for a given application.

Whenever any problem is detected by automated tests, the development team is notified immediately of action. This helps to create bug-free code throughout the development process.

Build automation transforms committs by team members, automatically to published deployment artifacts which are ready for deployment and validation in (test) environments.

Once a team member commits a number of code changes, the code changes can be merged automatically, analyzed, compiled, unit tested, and assembled automatically. The automated build process can create a new deployment package and publish it to an artifact repository. In this manner, a continuous flow from code commit to validated deployment package can be implemented.

The automated build process is important for a fail-fast strategy. It is the component which provides the first (central) feedback on the quality of committed code changes. A central build system can adopt a fail-fast strategy. For example, if there are code merge conflicts, the build should fail, so team members can fix the code merge conflict. Traditionally build automation was done using Make files. We’ll learn about this in the fifth module. 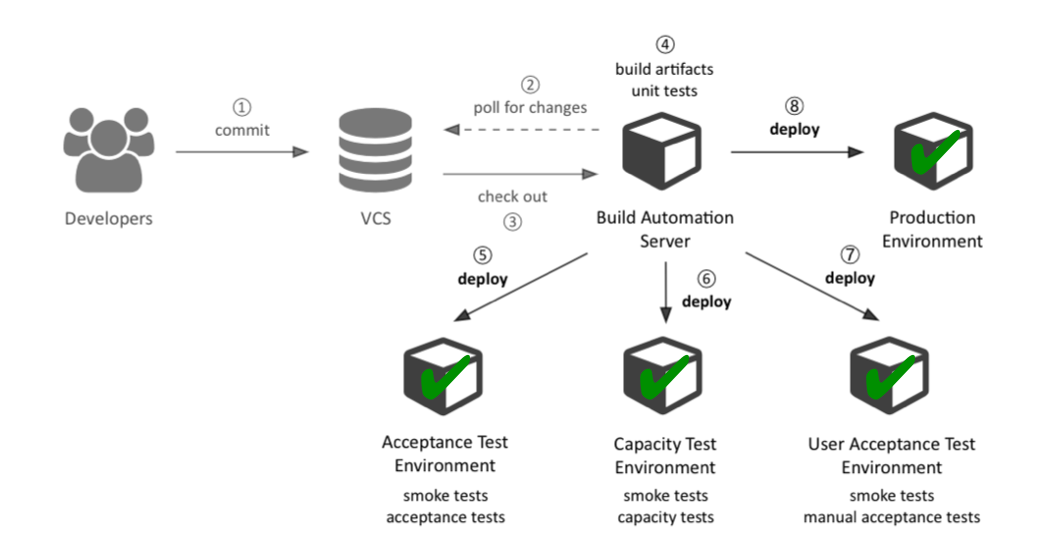 A Code Review tool is required to automate the code audit process. They help in static code analysis which is essential to deliever a reliable software application.

Static code analysis is a method of debugging by examining the source code even before a program is run. It is done by comparing given code with a set of pre-defined code rules.

GitHub is an application allowing you to store remote repositories. We can interact with our GitHub repository through the push/pull system on our local machine. GitHub is used primarily to allow other people to add to the project (ex. Open source projects). GitHub allows more people than just ourself to see and interact with the repository.

Jenkins is OpenSource tool used for building, testing, and deployment. It is easy to install. It works as a Continous Intergration server and also as a Continous Delivery Hub. Also it is easily configurable with the features of extensiblity.

Travis CI is used to perform automated deployments after passing the build. It is can be synced with GitHub and is able to deploy on various cloud services. Is is used to build as well as test the application.

Bamboo is a continuous delivery tool which is used from coding and to the process of deployment as in SDLC. It provides functionalities for building, testing, as well as deploying. It provides a clean user interface and is intuitive.

SonarQube is an open source tool used to measure as well as analyze the quality of source code. It is written in Java language and is able to analyze more than 20 programming languages. Anything that affects code base, from minor styling details to critical design errors, is inspected and evaluated by SonarQube, which helps software application developers to identify the issue and its effect.

Nexus Repository (as an artifact repository)

A software system has several dependencies on other softwares which is maintained by Nexus. Everything required by a system is termed as an artifact.

It maintains an internal copy of all dependencies and hence, it is crucial for the overall stability of the system. It, also, makes the distribution of code much easier.

Maven is used for project management and to provide functionalities to the project. It provides functionalities like reporting, documentation and project mabuilding. Through Maven we will be able to access new functionality instantly. Also there is no limitation on building the number of projects.

Codestriker is an open-source, code reviewing web application which helps us to record issues, comments, and decisions in a database. It can also be used for code inspections.

Crucible is a web-based code quality tool which is used by developers for code reviewing, finding bugs and defects, discussing the changes and knowledge sharing. The tool helps developers to catch major defects and improve their code architecture.

Findbug is an open source tool which is used specifically for java programs for static code analysis. It scans code for pre-defined bug patterns and find suspicious or detected code. Also for Findbug to work, it is not necessary to execute the code for the analysis which further helps to prevent from shipping avoidable issues. It provides a platform for developers to improve their skills to write better code.

JUnit being an open source framework is used for writing as well as running tests. It allows us to write code faster and also increase code quality.

With this, you have the complete knowledge of the build process taken by software systems.

Connect with the Author, Kshitiz Saini on LinkedIn and Twitter

Voting classifier is one of the most powerful methods of ensemble methods which we have explored in depth in this article.