In this article, we have presented an algorithm to check win and loss for a given Tic Tac Toe configuration.

NOTE: this algorithm assumes that the game data is passed in the following format

Why the above format? take a look at the image below

From the above image, we can see that there is one big block which is like the container, we have rows (the blocks that run horizontally from left to right) and columns (blocks that run vertically from up to down) and each row has 3 smaller blocks or tiles.
In our code above, we have the same structure:

Now, lets talk about the implementation of the algorithm
For this example, we will be taking X as our "winning" move (to make things easier).

STEP 2: How to calculate win for step 1.1: same move spans across (horizontally) on one row

Thats it for now, this will form the foundation for calculating the other wins too (keep reading and you'll see why).
Here we have a function called row_win that checks to see if there is any other move other than 'x' and if so that means the condition for a win has been violated thus no win for the row checked.
We use this to check for all the rows and if any other value other than False is returned then there is a win.
To check wins for all rows

STEP 3: How to calculate win for 1.2: the same move spans vertically along a column

Now here is where things get interesting and you'll see why I chose to structure the data the way I did.
If you look back at the image where I numbered the tiles. I'll make it easy for you 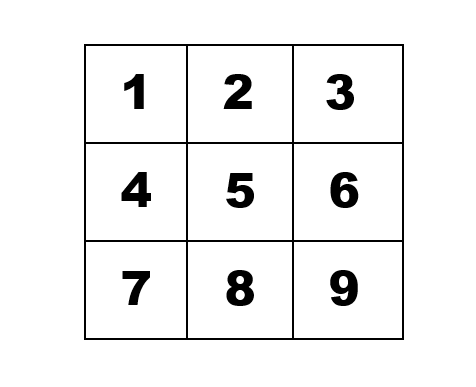 You can clearly see that the first row contains numbers 1, 2 and 3 or as a list [1,2,3] same with the other rows.
But again, take a look at the column, just the first one. It contains tiles 1, 4 and 7 or as a list [1,4,7]. So what we have to do is to find a way to group those elements together and form the same structure as our data, but looking like this 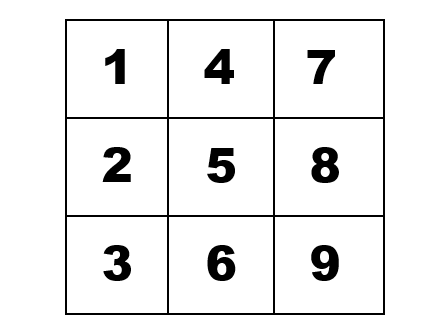 Thats it! the zip() function returns a zip object which yields each value when you iterate over it. We convert it to a list using list()
Now, to calculate for all rows, we use the same function as in STEP 2

STEP 4: How to calculate for win 3: same move spans diagonally across the game

Again, we need to find a way to filter out the values that form the diagonals of the game. That is [1,5,9] and [3,5,7].
Unlike last time, we don't have a built-in function, but its very easy to implement one that can do it for us.
Lets think of what we want to do first, then we look at how we'll do it.

Let's break down the code

The output of this code will be a list, that is, a diagonal side. we create an empty list output = [] in which we will store our values (tiles).
we then cycle through the rows and for each row, we get the tile that is one more step ahead than the previous row.

range(0, len(lst)) will return 0 to 2 which is 3 in total.
we then loop through each tile and append to the output list the value of lst[i][count]

We initialized the count variable with value 0. We only increment it by one after all the items/tiles in a row have been iterated through and the one desired has been appeneded to the output list.

But here is where the problem lies, in the second loop, that is, the inner loop. It runs as many times as the number of items/tiles we have in our row, which is 3. And each time, it stores one value, that is, lst[0][0] as for the first row. This is because the count variable doesn't get incremented until after the inner loop is done.

If our list was as simple as the above one, with just numbers, we could do something like this

the set is a data structure that does not allow duplicate objects. In python you can create a new set using set()

But there is just one thing, you can't do this with a list of dictionaries. Why? dictionaries are unhashable.

What does that mean? thats today's challenge for you.

Anyways, the key is to making the dict object hashable is using .item() method. It returns a tuple of the object.
A tuple is an immutable object, meaning it's value never changes.

If I were to explain the concept of hashing and immutability, then this would get pretty big, so I went ahead and found a really good explanation.

But remember, we have two diagonals, so how do we get the other one, i'll get straight to it, we just need to invert or reverse the tiles.

With the reversed tiles or structure, we can easily get the other diagonal using the same method we used to get the first diagonal. Thanks to python, we have another built-in called revsered() which returns a list_reverseiterator object. And thus we can do something like this:

Now we have code to get vertical list and horizontal list and to calculate the win we just have to use the code from STEP 1
Lets package them up into functions and make it accept the move and game data as parameters.

Lets try it out. I made a simple way to get input (we'll assume its the game for this).

This will take 9 inputs, that is for 9 tiles and will format the data in such a way that it matches the structure we want.

This is a sample output: 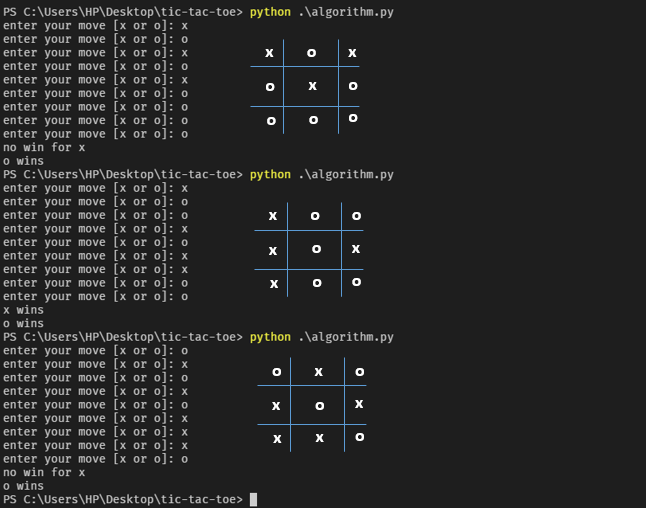 Now some people or everyone might take a look and say, wait a minute, all tiles are used or both wins for x and o! And thats why this algorithm should be used to calculate the win after any player makes a move. Thats another challenge for you, implement it.

Thanks for reading everyone :)

To introduce the topic, we will be talking about Pandas Dataframe and how easily we can add and remove rows in a DataFrame by following simple steps.

In this article, we have covered the concept of map::begin and map::end in C++ STL along with C++ code examples.