Before we move on to Nimber Arithmetic, we need to know what exactly a nimber is. In mathematics, the nimbers, also know as Grundy Numbers (Read this article), where they are defined as the values of heaps in the game Nim. The nimbers are the ordinal numbers endowed with nimber addition and nimber multiplication, which are distinct from ordinal addition and ordinal multiplication.

As per Sprague-Grundy theorem, every impartial game is equivalent to a Nim heap of a certain size, nimbers arise in a much larger class of impartial games. (Fun Fact: It may also appear in partizan games)


We will be discussing the nim-addition and nim-multiplication in deeper context with how they are implemented in Combinatory Game Theory (in Applications). But before we begin our journey, allow me to introduce you to 2 type of impartial game positions :

Nimber addition (also known as nim-addition) can be used to calculate the size of a single nim heap equivalent to a collection of nim heaps. It is defined recursively by:

For finite ordinals, the nim-sum is easily evaluated on a computer by taking the bitwise exclusive or (XOR, denoted by ⊕) of the corresponding numbers.

The key operation in the solution to Nim is binary addition without carrying.To add two numbers in this manner, first write out their binary expansions,and then take the exclusive or (XOR) of the two numbers bit by bit:

This Algorithm should work fine in all cases. Given below is one nim-addition matrix: 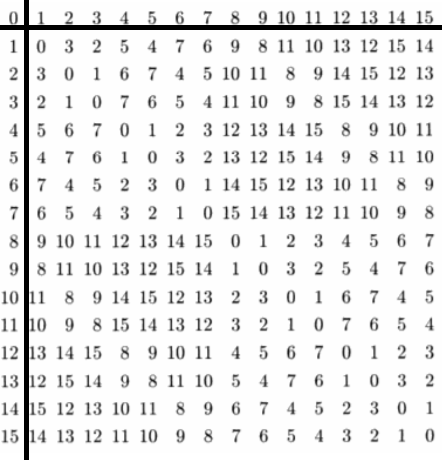 
Now, moving on to nim-multiplication:

Nimber multiplication is defined recursively by

First of all, let me make it clear that this method is not really famous as the latter one with not many applications, neverthless, to give you a basic idea of it's non intutiveness I would like you to have a look at this python snippet :


Applications in Game of Nim


Now, about the applications of the above discussed two arithmetic sequences. We can use Nimber Addition to solve the famous game of Nim, So, how do we do it?

Notice that if we take the sum of all the nim-heaps, at the end the nimsum of all the heaps is equal to 0 (since adding 0 together any number of times gives 0). But there are other times that the nim-sum can be 0. Note that any x⊕x = 0, since any number XORed with itself is 0.

So, the winning strategy is easily :

Now, if we look at the major application of Nim multiplication, it can be seen in this fun problem of Seating the first few Billion Knights

The odd Knight of the round table problem asks for a consistent placement of the nth Knight in the row at an odd root of unity, compatible with the two different realizations of the algebraic closure of the field with two elements.

The first identifies the multiplicative group of its non-zero elements with the group of all odd complex roots of unity, under complex multiplication. The second uses Conway’s ‘simplicity rules’ in ONAG to define an addition and multiplication on the set of all ordinal numbers. 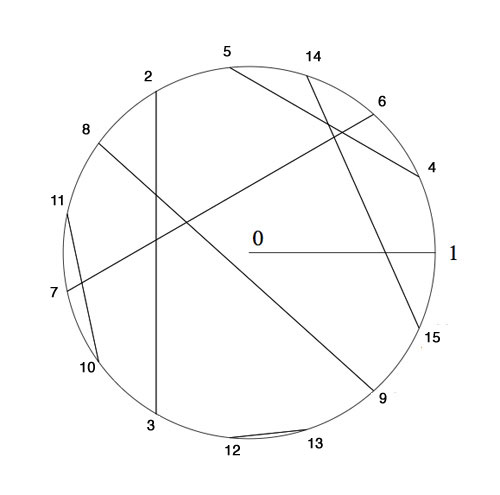 Here’s the seating arrangement for the first 15 knights. Conway proved that all finite ordinals smaller than 22i form a subfield of F2. The first non-trivial one being {0,1,2,3} with smallest multiplicative generator 2, whence we place Knight 2 at e2iπ/3 and as 22=3 (using 0 index of the {0,1,2,3}) we know where to place the third Knight.

The multiplicative algorithm utilized in a 2.4Ghz 2Gb MacBook with Sage 4.6 (According to the source documentation) is :

This utilizes Multiplicative Nimber to a certain extent!


To get a perfect nimber matrix, what should be the number of rows for the same? ( here ^ is raise to the power)

Are the middle game semantics for misère and normal gameplay different for nim?

Nim is a mathematical game of strategy in which two players take turns removing objects from distinct heaps. The key to the theory of the game is the binary digital sum of the heap sizes "exclusive or" (xor). It is called the nim-sum. Find implementations of winning strategy and applications