In this article, we will design an algorithm to Find word with maximum frequency using Trie Data Structure.

We are given N words and we need to find the word that occurs the maximum number of times in the given set. The challenge is to use Trie Data Structure to find the word with maximum frequency.

Assume there are N strings and the average length of each string is O(M).

Other common ways to find the word with maximum frequency are:

It is not easy to understand how to apply Trie in this problem but once you get the idea, you can use Trie in innovative ways.

The key idea of using Trie to find the word with maximum frequency is:

The number of nodes in the Trie at max will be O(N * M). In reality, it will be less than this as the prefix will be common for multiple words. Moreover, a word with T frequency is stored only once so it is space efficient.

If we assume there are P nodes in the Trie, then traversal with take O(P) time.

The Fundamentals of Trie

A Trie is a tree data structure that is used to efficiently retreive keys within a set, preferrebaly strings.
NOTE: It is also known as digital tree or preffix tree. And one more thing, its pronounced as "Try".
Here is a visual representation of a Trie. 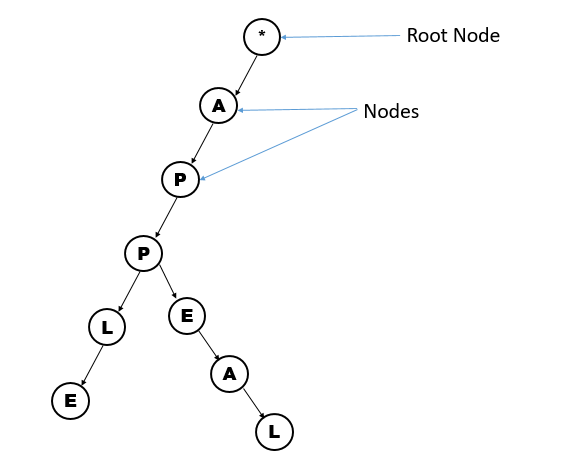 From the image you can see that we have a root node. That is where all the other nodes attach to. So, A Trie is made up of Nodes, each node connects to another node.
Here is a question, How many words can you see from the Trie?

We have 2 words, apple and appeal. Both these words share a common preffix, that is, "APP". As software engineers, data storage and retrieval should be efficient. For 2 words, of course, doesn't seem like it matters, but think of google's autocomplete feature, millions and millions of words. The Trie enables us to re-use preffixes, if words share a common preffix, why do we need to repeat the whole thing by storing both "APPLE" and "APPEAL" while we could store "APP" and build all the words that share that preffix by just connecting the letters are nodes to them.

What operations can be performed on a Trie

There are many operations depending on what features you want your implementation to have. But there are others which are essential and common. These include:

NOTE: It does not matter what you call the above methods. Although it is good practice to use understandable names.

Remember a Trie is made up of nodes, and each node has connects to another node (feels like a linked list). The top most node, is the root node, any other node that connects directly to it is a child of the root node or a descendant. so the nodes have a parent-child relationship. The last node has no children and it denotes the end of the word, we can either leave it like that or mark it. How? by setting an attribute, say we call it isEndOfWord to True. By default this is False. The other attribute is children. We'll talk about it, after we look at the code.

The children attribute will hold store the Node's children in key-value pairs, we'll see why when we get to imeplementing the insert method. Our TrieNode has 2 other attributes essential to what we want to achieve, the isEndOfWord attribute which marks if the node is the node (or letter) that marks the end of a word and also a count attribute whose is 0 for all nodes except for the end node where it becomes 1. This is because the end node signifies a complete word, and since we are trying to keep track of the frequency (count), then the first complete word to be inserted, will have a count of 1. The increment_count() method simply increments count by 1 (also essential to our main focus).

Now we have a TrieNode, but this is just a simple node, elements that make up the actually Trie Data Structure. Now lets implement the actually thing.
I'll write the code out first, then we can discuss it.

This is the skeleton of the structure.

Okay, so now we can create a node, but its empty and we need a way to store strings (words).

I'll write out the code first then explain.

the insert() method takes in word as an argument, this is the word that we want to add to our Trie. As we said and saw, In a Trie, each letter is a Node. And that each letter in a word is a child node of the previous letter in the word, up to the point we have the root.

What does this mean? It means for us to insert a word, we have to loop through each character of the word, starting from the root node, if the character exists as a child of the currentNode, we don't create it (avoid repition, efficient), if it does not exists, we create it and set it as the currentNode, and now we repeat the same process with the currentNode.

Let's do it manually for clarity:
We have an empty Trie and we want to insert the word "apple".

This will retreive the keys of the dictionary, thus we get "a, b, c".
So now, by checking if char not in currentNode.children, we are checking if there is any node with the key, in our case, "a".

Now you understand how it works, let's get to the main focus of the article. At this point, you can see that only a single instance of a word can exist in a Trie. Meaning we can't have two same words e.g "apple" on the same Trie. That would be ineficient.

So if we can't have the same word twice in the same Trie, how do we find the frequency of its occurence? Thats where the TrieNode's self.count and self.increment_count() come in. A word is signified by its end character or Node. If we try to insert a word that already exists, then the last Node's count attribute is incremented by 1. It answers the question, how many times how this word been searched for?. Lets test it.
I have this code below

From the output, you can see that for the first time "apple" (and every other word) appears once, but when you try to insert it again, the count increments.
That's it for our frequency feature.

Time and Space complexity for insertion

As for insertion, we have to traverse through each character in the word we are inserting, thus traversing through each node from the root node. Since the word to be inserted is the input, then its time complexity is denoted by O(n), where n = the size of the input (in this case, size of the word).
Space complexity for insertion is also O(n) where n = length of the word (since n new nodes are added).

Now we are already done with our main objective for this article, but feel free to read on to understand more about Trie.

How to implement the startsWith method

For this method, we have similar steps to the insert method except that we are not inserting anything in the Trie.
We are simply looping over each character in the preffix and if the character is a child of the currentNode (starting from root node), we set its node to the current node and move to the check the next one, If its not a child of the currentNode, we return False, since if one letter of the preffix isn't there, we return False.

Just as before, we have to traverse through every node (as we are traversing through each character), thus its time complexity is denoted by O(n).

How to implement the searchWord method

What's the difference between a preffix and a word?
A word has an ending character while a preffix does not. That is, the attribute isEndOfWord of the last character in a word is set to True, while for a preffix its not.
In this method, we simply repeat what we did for startsWith method, except at the end of the loop (where the currentNode will be the last character in the word) we return the currentNode.isEndOfWord where if its True, the word exists in the Trie and if False, the word doesn't exists.

Time complexity of the searchWord method

Its time complexity is denoted as O(n) as we have to traverse through each node (by traversing through the whole word).

Thank you for making it to the end, hope you enjoyed this article. In case you did not understand Time and Space complexity, i'd advice to read more about BigO notation.