Despite the fact that F-tests are a ratio of variances, they can be used in a wide range of scenarios. The F-test, unsurprisingly, may be used to determine variance equality. The F-test, on the other hand, becomes an extremely flexible test when the variances included in the ratio are changed. F-statistics and F-tests can be used to assess the overall significance of a regression model, compare the fits of multiple models, test individual regression terms, and test equality of means, among other things.

On the basis of the F statistic, the researcher performs an F-test. The F statistic is equal to the ratio of two independent chi square variates divided by their respective degrees of freedom. The F-test follows the F-distribution of Snedecor.
Some statistical theory applications are included in the F-test. The applications will be described in full in this document.

When to Use F-Test

A researcher use the F-test to do a test for the equivalence of the two population variances. The F-test is used when a researcher wishes to see if two independent samples chosen from a normal population with the same variability are comparable.

The F Table is a set of tables that calculates the likelihood of a given alpha level. The F Table is actually a set of tables for four different alpha levels:.10,.5,.025, and.01. Always put the numerator degrees of freedom first when using the F dist. table; if you switch the numerator and denominator around, you'll receive a different result. The area in the right tail is shown in the table.
Instead of using a table, you can use a calculator to get more precise results. 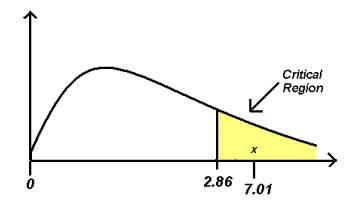 What is the purpose of the F Statistic Table?

You can compare the F value to a f crucial value in the table once you've identified it. If the observed value of F is greater than the value in the F table, you can reject the null hypothesis with 95% confidence, indicating that the variation between your two populations is not attributable to chance. The F Statistic Table is made up of several tables. Which table you use will be determined by the alpha level you select. If your alpha level is.05, for example, your right tail region is.05 (5%), and you'll seek for the f crucial value in the alpha level =.05 table.
The denominator degrees of freedom are represented by the rows in the F Distribution Table, while the numerator degrees of freedom are represented by the columns.
Look for alpha=.10 in the 6 column (numerator) and 6 row (denominator) of the F Table to find the.10 f critical value for a F distribution with 6 and 6 degrees of freedom. F(.10, 6, 6) = 3.05455. 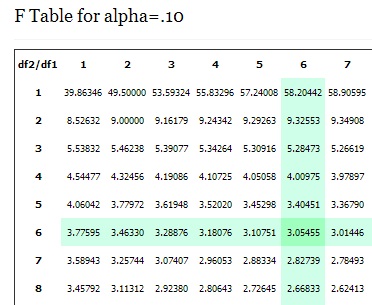 Step by Step Calculation of an F-test

The F-Test formula is used to test the null hypothesis that the variances of two populations are identical in the steps below: Note that several F Tables exist for various degrees of significance. The F table for alpha =.050 is shown above.

For the test, several assumptions are made. To use the test, your population must be roughly regularly distributed (i.e., fit the shape of a bell curve).Furthermore, the samples must be unrelated to one another.In addition, there are a few key considerations to keep in mind:

To force the test into a right-tailed test, the larger variance should always go in the numerator (top number). It's easier to calculate right-tailed tests. Divide alpha by 2 before determining the correct critical value for two-tailed tests.
If you're given standard deviations, you'll need to square them in order to get variances.Use the bigger critical value if your degrees of freedom aren't included in the F Table. Type I errors are less likely as a result of this.

For this we are going to conduct a two-tailed F-test with a level of significance of 10%. The approach to performing an F-Test in the Python programming language will be discussed. The scipy stats.f() function in Python with the appropriate parameters to obtain the F- test for the given data.

scipy stats.f(): This function returns a F continuous random variable with a standard format and several shape parameters to complete its specification.

We'll use data from a normalized distributed sample with varying variance values, and we'll use the scipy.stats.f.cdf() function to get the data's F-test in the Python computer language.

In this article, we will design an algorithm to Find word with maximum frequency using Trie Data Structure.

In the last few years, Apache Kafka has become one of the most popular open-source streaming platforms. From startups to large enterprises, many organizations use Kafka for its high throughput and low latency capabilities.