In this article, we will get to know about the various types of hypotheses in statistics.

A hypothesis is a precise, testable statement of what a researcher predicts will be the outcome of an experiment or study. The formulated hypothesis can further be tested to see whether it holds good or not. This usually involves proposing a relationship between the dependent (what the study measures or its outcome) and independent variables (the variables that are adjusted in the course of the study).

The main idea behind developing a hypothesis is that it helps us assume the probability of success and failure in the study and gives us a direction for the next steps. Apart from this, it helps us measure the validity of our study and provides us with the basic evidence to check the same.

The hypothesis that there is no difference between things is called the null hypothesis.

Suppose we are testing two drugs A and B for the same disease. We give the first drug A to 3 people and B to another 3 people suffering from the same disease and check the time required for them to recover from the disease. The null hypothesis is that there is no difference in recovery times between drug A and drug B. Let us visualize our results. 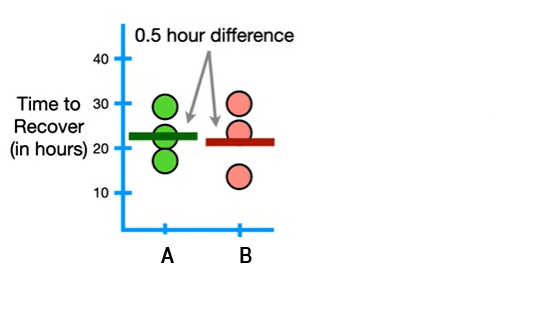 We find that there is a 0.5 hour difference between the mean recovery times of drugs and B. Now, suppose we repeat the experiment with a new set of 6 people. 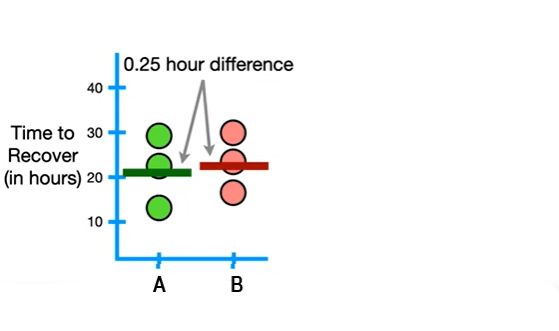 This time, we find that the difference in mean recovery times of both the drugs is 0.25 hour. We know that the recovery time of a person is influenced by various factors that we cannot control like their diet, physical fitness, stress factor, state of their immune system and many more. Here, we can use the null hypothesis so we don't have to worry about whether the time difference is 0.25 hour or 0.5 hour. Instead, we simply see if the data convinces us to rehect the hypothesis that there is no difference between Drugs A and B.

So, in our above case of drug experimentation, the alternate hypothesis would be that there is a difference between the recovery times of drugs A and B.

When we have three or more groups, the concept of alternative hypothesis becomes more interesting. Suppose, instead of just two different drugs, we use 3 different drugs A,B and C in our previous study. The null hypothesis would be that there is no difference between all the 3 drugs. But the alternate hypothesis could take different forms! It can be that all the three drugs are different from each other, or that any two of the drugs are same and the third one is different.

"Smoking leads to cancer" is an example of simple hypothesis.

This is also known as composite hypothesis. This hypothesis states the relationship between two or more variables and does not specify the population completely - the form of probability distribution and some parameters remains unknown.

"Smoking and other drugs lead to cancer, chest infections, problems in throat, mental stress, etc" is an example of complex hypothesis.

For example, the experimenter hypothesizes that the adult participants would be able to recall more numbers correctly than the children in a memory game.

We will discuss a basics of Python here as importance of Python for data science cannot be emphasized enough.

In this article, we have presented how to convert an array of uint8_t (uint8_t*) to an array of char (char*).