In this article, we have discussed 35 advanced data science questions asked in interviews.

1. What is the approach you take to solve any data analytics based project?

We generally go along with the 6 phases:

2. How regularly should a machine learning algorithm be updated?

We do not update ML algorithms on a regular basis as this hinders the well-defined steps of how the problem is solved and also creates problems in the systems that are already implementing the algorithm. We update the algorithm only in any of the following cases:

3. What is ROC curve and how to create it?

The Receiver Operating Characteristic (ROC) curve is a plot between true and false positive rates at different thresholds. It tells us how much the model is able to distinguish between classes and gives us a trade-off between sensitivity and specificity. 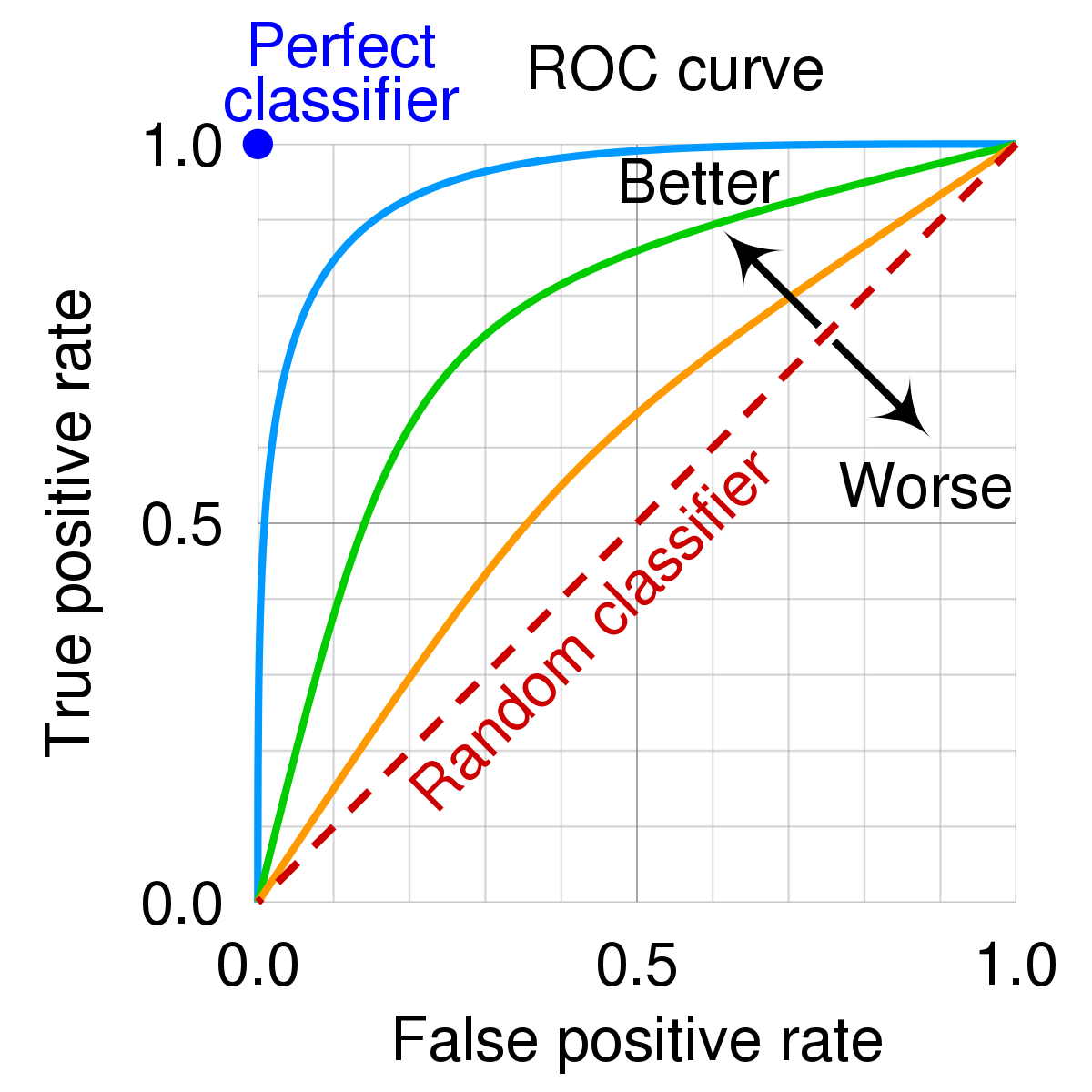 4. How is regularization used to perform feature selection?

The regularization adds penalties to various parameters in the ML model in an attempt to reduce its freedom and avoid overfitting. Regularization methods like the L1 and L2 are used widely. The L1 is also known as LASSO (Least Absolute Shrinkage and Selection Operator) regression that adds the absolute value of the coefficient as penalty. It is capable of shrinking some features to 0 thus eliminating them from the model.

5. What is a Generative Adversarial Network?

A generative adversarial network (GAN) is an unsupervised machine learning task that has 2 main components: a generator model and a discriminator model. These models learn the patterns in the input data in such a way that it is able to generate output samples that likely belong to the original dataset.

The generator model keeps on generating new samples and the job of the discriminator model is to classify the samples as real (belonging to the original dataset) or fake (generated). The two models are trained together in an adversarial or zero-sum condition until the generator is generating more plausible samples.

6. Let us say that our laptop’s RAM is only 4GB and you want to train your model on 10GB data set. What will you do in such a situation?

First we need to know the type of model we are training. The two types that can be trained under such situations are neural networks and support vector machines (SVMs).

For training neural networks:
In this case, we can use a Numpy array to load the entire dataset as it never stores the whole of it and just creates mappings. Then, we can get the desired inputs by indexing the Numpy array and pass these as inputs to the neural networks while maintaining a small batch size.

For training support vector machines:
The advantage of using SVM is that we can obtain smaller portions of the dataset i.e subsets of the original dataset by using the partial fit function and this can be repeated to obtain other subsets too.

7.Why is TensorFlow the most preferred library in deep learning?

The reason why TensorFlow is the most preferred deep learning library is that it has faster compilation speed than other libraries like keras and pytorch. It supports both GPU and CPU computing devices and provides both C++ and Python APIs making it very easy to work with compared to the other libraries.

8. What do you understand by cross-validation?

Cross-validation is a technique used in machine learning to improve the performance of the model. We can also call it as a technique for asserting how well the model generalizes to an unknown dataset. Here, the training data is split into different groups, the number of which are usually specified by the programmer. The model will then be trained, validated and tested against these groups in rotation. The various types of cross-validation methods are:

Given below is a visual representation of 4-fold cross validation (k=4). 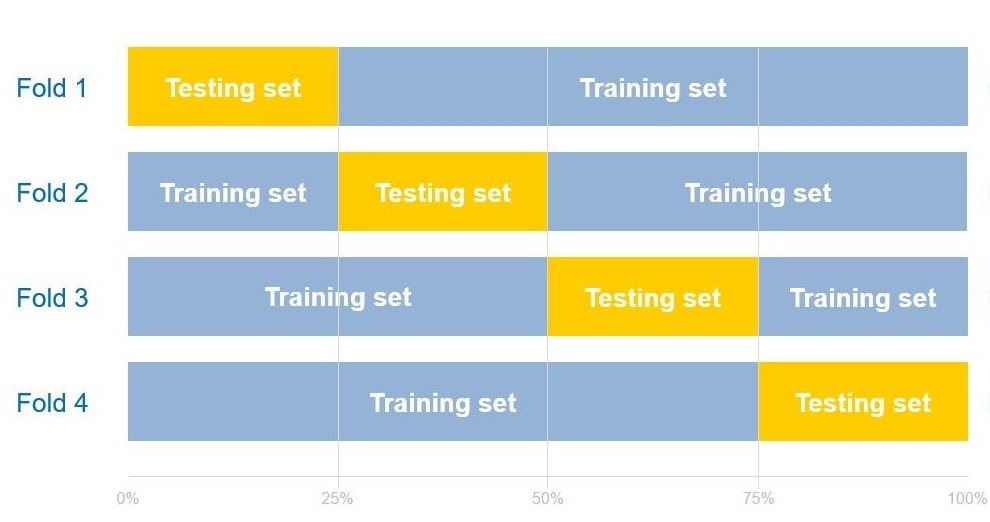 9. What are exploding and vanishing gradients?

Let us say we are training a RNN model and as the backpropagation algorithm moves from the output layer towards the input layer, the gradients often become smaller. The problem of the slope becoming too small is known as vanishing gradient problem. This reduces the performance, increases the training time and results in the gradient descent never converging to the optimum.

In the same scenario, instead of getting smaller, if the gradients grow exponentially larger causing huge updates in the weights of the model, it is known as exploding gradient problem. This causes the gradient descent to diverge.

10. Linear regression is carried out under some assumptions. What are they?

The assumptions under which linear regression is done are:

11. How is grid search different from random search?

Both grid search and random search are strategies used for tuning model hyperparameters. In grid search, a grid of the parameters and their values to be tested are set up and every possible combination from the grid are tried, evaluated and the model's accuracy using them are tracked. The one with the highest accuracy is chosen as the best parameter values for the model. One drawback is that it consumes a lot of time and becomes complex as the number of parameters increase.

Random search does not test all the combinations but instead picks out random combinations of parameters each time and test and evaluates them. Here, we have the chance of finding the optimal parameters less time compared to grid search.

12. How does back propagation work?

Back propagation is an algorithm used in a multilayer network that consists of an input layer, an output layer and atleast one hidden layer. The error is calculayed at the output layer by comparing the target and the actual output. This claculated error is propagated backwards to the input layer. There are three phases in this algorithm:

Auto-encoders are learning networks that gets the input, encodes them and then learn to reconstruct the data from the encoded form to an output that is as close to the input as possible. By design, it reduces the dimensions in data by learning to ignore the noise. This receives unlabeled data as inputs. It consists of 4 main components: an encoder, bottleneck, decoder and reconstruction loss.

14. For text analysis, which one between R and Python would you pick and why?

In case of text analysis, Python is preferred than R as Python has faster performance for all types of text analytics and high-performance data analysis tools and data structures that are easy to use are offered by the Pandas library.

Markov chain is a type of stochastic process in which the the future probability of any event depends on the state of its previous event.

In machine learning, Markov chains can be used for any kind of forecasting like weather and sales forecasting, for predicting customer behavior, analyzing brand loyalty and also it can be merged with many NLP tasks like POS tagging.

17. What is the difference between error and residual error?

18. What is imputation? List the different types of imputation techniques.

The process of replacing missing data with other values is known as imputation. Some imputation techniques are discussed below.

19. How is Data modeling different from Database design?

Based on the relationship between various data models, Data modelling creates a conceptual model by systematically applying data modeling techniques. It involves moving up from the conceptual stage to the logical and consecutively to the physical schema. On the other hand, the output of database design is a detailed data model of the database. It must strictly include the detailed logical model but the storage parameters and choices of physical design are optional.

20. What is information gain, entropy and pruning in decision tree?

Entropy in a decision tree algorithm is the measure of randomness or impurity. It tell us how pure or impure the given dataset is i.e. gives an idea about variance in the dataset.
Information gain is the difference in entropy. It tell us how much entropy is reduced when the data is split using a particular feature.
Pruning refers to removing redundant sections of the decision tree resulting in a smaller decision tree.

22. What is the benefit of dimensionality reduction?

Higher dimension data is difficult to work with as it takes a lot of time to process the data and train the model on it. Dimensionality reduction refers to reducing the dimensions of the data while still keeping intact the overall information of the data. This results in faster processing, removes noise and improves model accuracy. It also reduces the storage requirements of the machine learning project.

26. What are the types of kernels in SVM?

The nine types of kernels in SVM are:

27. Write a function in python to calculate the accuracy of a binary classification algorithm using its confusion matrix.

29. What is ensemble learning?

The main goal of building machine learning models is that they understand the underlying patterns in data and make predictions accordingly. But when we have complex datasets, it becomes difficult for a single model to do the job. In this case, we combine more than one base models to create an effective model. This is known as ensemble learning.

30. What are bagging and boosting?

Both bagging and boosting are ensemble learning methods. Bagging stands for bootstrap aggregating. In this method, we first data using bootstrapping. In bootstrapping, we generate multiple samples of size N from an existing dataset. Multiple models are trained in parallel using these bootstrapped data.

Unlike bagging, we do not train many models in a parallel manner in boosting. Here, we train many models in a sequential manner. The weak models are iteratively combined passed to another model in such a way that the training of a new model depends on the models trained before it. This is done to reduce error.

31. Calculate precision and recall in the given confusion matrix.

32. How do you deal with unbalanced data?

The ways to deal with imbalanced datasets are:

34. What are the feature selection methods used to select the right variable?

The different feature selection methods that are used to select the right variable are:

35. What is a Box-Cox transformation?

This transformation is named after statisticians George Box and Sir David Roxbee Cox who developed it. It is a transformation of dependent variables that are not normal into normal shapes. Applying Box-Cox transformation to data that is not normal means that we are able to run a broader number of tests on our data.

In this article, we have presented how to convert an array of uint8_t (uint8_t*) to an array of char (char*).

In this article, we have explored the reason behind the error "Undefined reference to pthread_create" and presented two fixes in the compilation command to fix this compilation error.