In this article, we discuss finite automata, a state machine that takes a regular expression and changes its state accordingly for each literal and when the transitions reach the final state, the string is accepted and thus it is said to be a valid token of a language.

Finite automata is an idealized machine used to recognizing patterns in an input that is taken from a characters set.
Given a string it either accepts it or rejects it. This depends on if the pattern defined in the automata is in the input.
A finite automaton will consists of a set of states, start state, end state and a set of transitions.

The above image shows a toll gate that demonstrates how automaton shows up in a natural way.
Let's try to design a computer that controls the toll gate. When a car arrives at the gate it is currently closed and after the car owner pays a sum of money, the gate opens.
The amount for the gate to open is 25 cents. We only have 5, 10 and 25 cents denominations. The gate cannot charge an excess amount.
So to got through a driver will insert a sequence of coins into the machine and it decides to either open the gate or keep it shut.
The machine will therefore have the following six states:

Here is the machine's behavior for all possible machine sequences.

q5 is a special state since when the machine reaches this state the gate opens.
At any point the machine only has to remember what state it is in and thus this needs little memory, that is, ⌈log 6⌉ = 3 bits of memory.

Consider the image below. Given an input string 1101, it is processed as follows.

q1 is the starting state, q2 is the accepting state.

Consider the string 0101010, and try visualizing how it will be processed, you will see that it puts the machine in state q3 which is not the accept state and we say that the string is rejected by the machine.

So what kinds of strings does this machine accept?

Every other string is rejected.

Think of the transition function δ as a program of the finite automaton M = (Q,Σ, δ, q, F). This function tells us what M can do on a single step.

Let's learn about non-deterministic finite automata through an example where we shall see the difference between the two.

An Example:
Consider the state diagram below:

If this continues we have seven possible computations as shown in the image below; 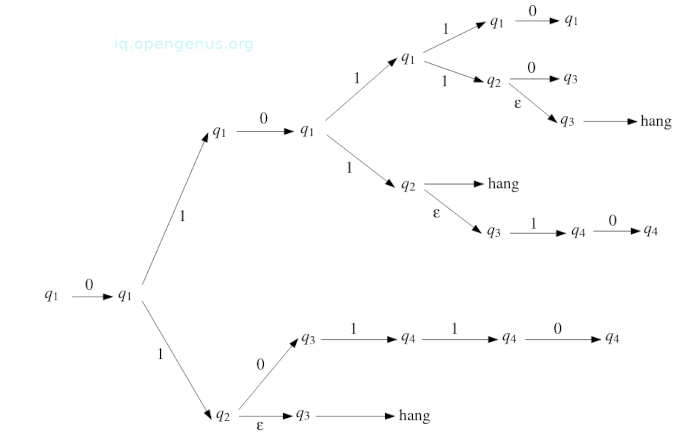 Let's look at the lowest path:

Given another string 010, we have the following three computations.

None of the computations end in accept state and therefore the string is rejected.

In conclusion Non-deterministic Finite Automata accept a string if there exists at least a path that:

A string is rejected if none of the conditions hold.

Similarities between DFA and NFA.

Although it may seem that NFAs are powerful than DFAs this is not the case as we shall see her.
Here we prove that a language is only accepted by DFA iff it is accepted by NFA.
For this we will first learn how to convert an arbitrary NFA to a DFA that accepts the same language.
Let's now go about converting DFA to NFA.
Let M = (Q,Σ, δ, q, F) be a DFA. δ is a function δ : Q × Σ → Q and so we define δ′ : Q × Σε → P(Q) as follows. For any r ∈ Q and for any a ∈

Therefore, N = (Q,Σ, δ′, q, F) is an NFA whose behavior will be exactly the same as that of DFA M.
We can see this by looking at the state diagrams of M and N and we see that they are equal and therefore L(M) = L(N).

Proof: Keep in mind that NFA N can perform multiple computations on an input string and therefore the idea of the proof is to construct a DFA M which runs all these computations simultaneously.
DFA M will have the property below:

We present the conversion for the case when N doesn't contains ϵ-transitions. In other words, Ns state diagram doesn't contain an edge with ϵ as a label.
Lets define DFA of M as M = (Q′,Σ, δ′, q′, F′) where:

Looking at the transition function δ′ we see that N is an NFA, δ(r, a) is a subset of Q and therefore this implies that δ′(R, a) is the union of the subsets Q and also a subset of Q.
Thus δ′(R, a) is an element of Q′.
Set δ(r, a) is equal to the set of all states of NFA N that can be reached from state r by reading the symbol a.
We take the union of sets δ(r, a), where r ranges over all R elements, to get the new set δ′(R, a). This new set is the state that DFA M reaches from R state by reading symbol a.
Here we have obtained a correspondence given when we began this proof.
Consider the general case where we allow ϵ-transitions in NFA N.
DFA M is defined the same as however in this case the start state q′ and the transition function δ' have to be modified.

Remember the NFA computation consists of:

DFA M will simulate this in the following way:

The results obtain are summarized in the following theorem;
Theorem: Let A be a language, then A is regular if and only if there exists a non-deterministic finite automaton that accepts A.

Finite automata has two states namely, accept state and reject state. The accept state is arrived at when an input string is processed successfully.
During a transition an automata either decides to proceed to the next state or not.

In this article, we have explored the differences between List, Tuple and Dictionary in Python.

In this article we introduce the theory of computation and lay the foundation for articles to come by going over mathematical concepts and how to prove theorems which will deem useful in understanding the domain of compiler design.