Moore's law is the observation that the number of transistors in a dense integrated circuit doubles about every two years.

In simple terms, it states that computing would dramatically increase in power, and decrease in relative cost, at an exponential rate.

Moore's law is captured by the following image: 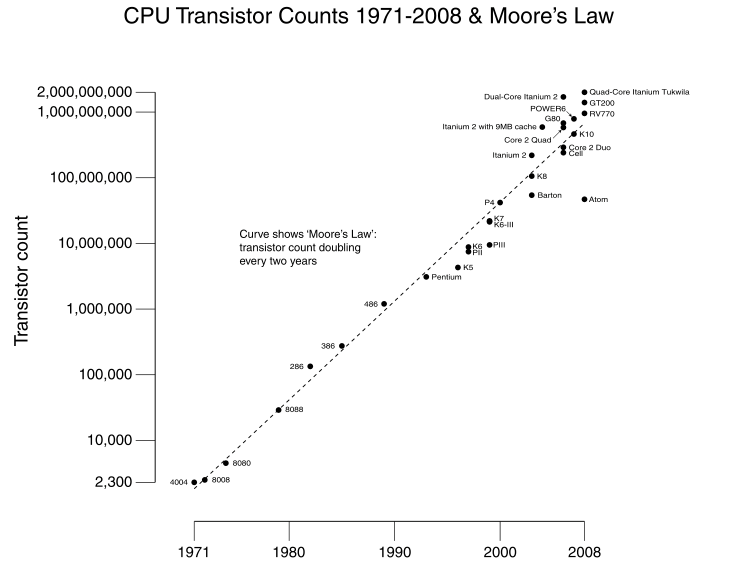 Gordon Earle Moore (Founder of Intel) predicted the two-year doubling trend based on what he had seen happen in the early years of computer-chip manufacture.

In his 1965 paper, he plotted the number of transistors that fit on a chip since 1959 and saw a pattern of yearly doubling that he then extrapolated for the next 10 years. He later revised the trend to a doubling about every two years.

Moore's law is used for the following:

Many technologists have predicted the demise of Moore’s doubling over the years and Moore himself states that this exponential growth cannot last forever.

His law, still, persists today, and hence the computational growth it predicts will continue to profoundly change our world. As he put it: “We’ve just seen the beginning of what computers are going to do for us.”

Similar laws in other fields

Eroom's law is a pharmaceutical drug development observation which states that the cost of developing a new drug roughly doubles every nine years.

RISC and CISC differ based on the following factors: approach to improve computing performance, hardware and Software focus and hardware specifications. In general, both are equally useful. CISC is commonly used in automation devices whereas RISC is used in video and image processing applications.

Manacher's Algorithm is an efficient algorithm to find the longest palindromic substring in a given string in linear time and linear space complexity. It uses key ideas from dynamic programming to solve the problem efficiently.