The source command reads and executes the contents of a file in the current shell environment. In this article, we learn about this command through various examples.

We use the source command in Linux to read and execute the contents of a file which we pass as an argument in the current shell environment. In other words, it reads a file and executes its contents as commands in the terminal.

We can also use a period instead of the word source:

IF we pass arguments, they are used as positional parameters to the FILENAME.
The source command returns an exit code of 0, that is if the file exists otherwise it returns 1.

As an example let's add some basic commands in a file, source1.txt.

Now let's run the source command and pass this file as its argument. 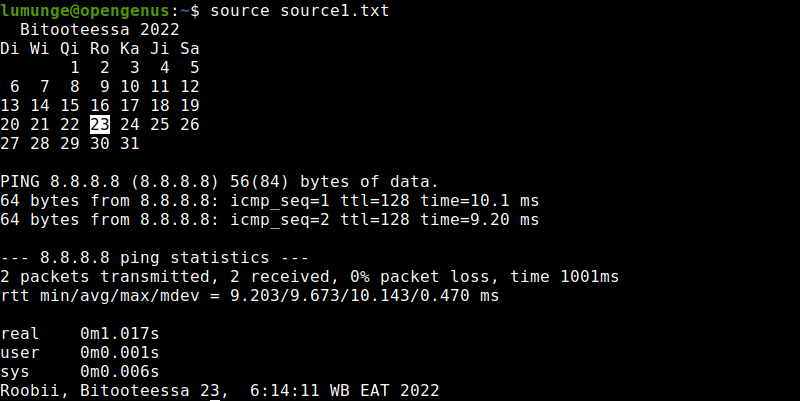 As we can see from the output, all the commands are executed and output displayed in the terminal.

We can also read variables from files using the source command. Let's create a file variables.sh that has two variables initialized:

To read the values of the variables, we create the following bash script - read_vars.sh:

To execute the bash script we write:

Now when we execute the script, we see the variable initially declared in the file printed in the standard output.

It is convenient to save these functions in different scripts then reference them when writing scripts using the source command.

For example, we have the following script that checks a user's group, if the user belongs to the group, then we can perform an action otherwise the action is not performed:

Here is the main script where we references to the above script to proceed. If the user indeed belongs to the group, we perform actions: 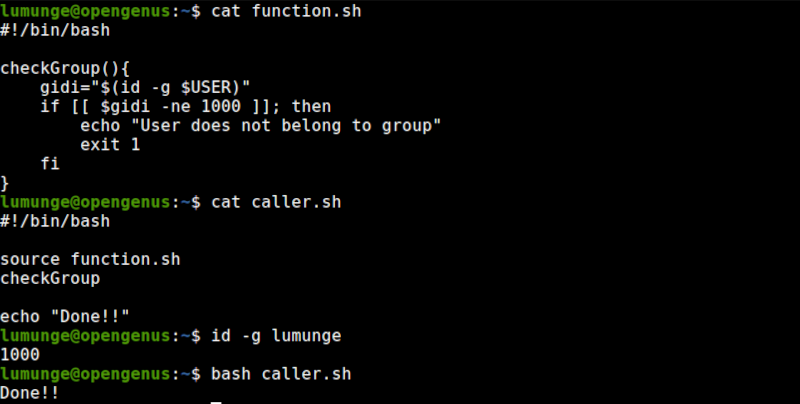 This is applicable in cases where we want a certain group of users to be able to perform actions such as system updates or execute certain sensitive commands.

We also use the source command to refresh the current shell environment, for example, let's create an alias.

After the command is executed. we will only be able to use the alias in the current terminal session.

When we open a new terminal session and try to execute the up command, it won't work since it was not permanent. To make it permanent we edit the ~/.bashrc and add the above line below the ls aliases.

Still the alias will not work since it is not in the current shell environment. To use it we execute the command:

Now the alias will work in all terminal sessions.

We commonly use the source command to source environment variables into the current terminal session since any variable that is assigned a value in a script will retain its value after execution is complete.

For a comprehensive guide on how to use the source command in Linux. We can execute the command $ source --help in a Linux terminal.

On average, a Desktop Computer uses 219 Watt per hour of Electricity while a 15 inch Laptop uses 159 Watt of Electricity. We have provided detailed calculation to arrive at the total Electricity consumption and Cost.

VIM is one of the many Linux text editors. It is configurable and programmable. Usually, we open a single file with VIM. In this article, we demonstrate how to open multiple files in a single VIM session.