We will cover the following sub-topics:

-A, --catenate, --concatenate appends newly created tar file with a previous version of the tar file.
-c, --create: Creates a new .tar or .tar.gz archive
-d, --diff, --compare: compares the file system and its archived file
--delete: delete files from the archive
-r, --append: appends file at end of the tar file
-t, --list: show all the files present in the archived tar file
-u, --update: adds the files from the file system not present in the archive file
-x, --extract, --get: extracts the files from archive to the destination folder.
-v, --verbose: verbosely gives summary of each process in execution of tar command.
-z, --gzip: creates or decompresses a tar.gz file

Note: Append adds a file at end of tar file while concatentation adds another tar at end of the tar file.

Note: Reason of tar extracting the files in same location they were archived is that .tar files store namespace file rather than filename. Thus, a file called file1.txt stored at /home/Desktop will be stored as /home/Desktop/file1.txt in archive rather than as file1.txt 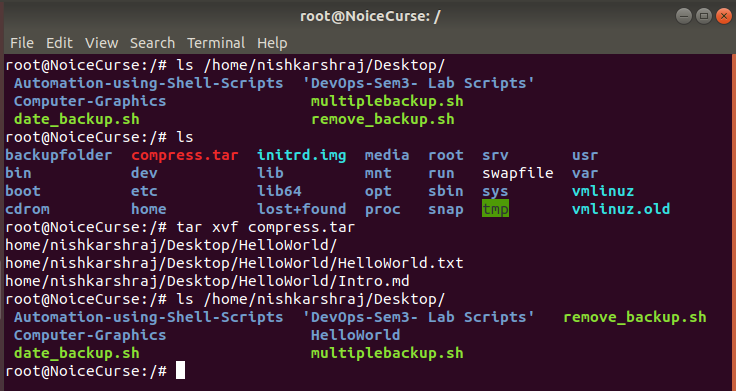 Working on the same compress.tar file which was created in Task 1:

It is possible to see the individual files present in the archive file using tar command.

4. Append files at the end of archive files

It is possible to append files at the end of archive files using tar command. 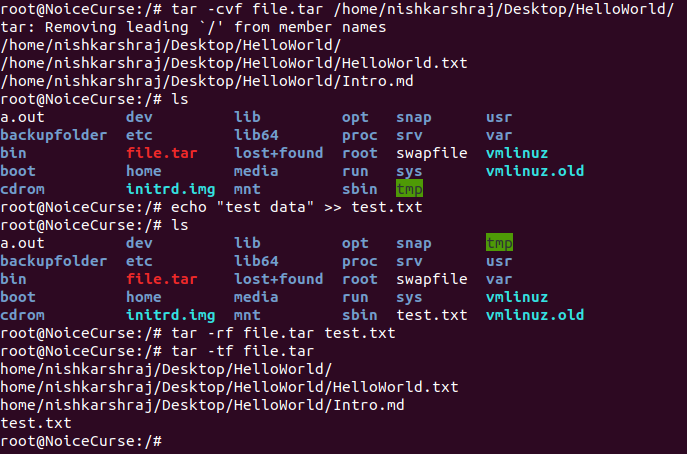 Here, following command are used on the Shell: 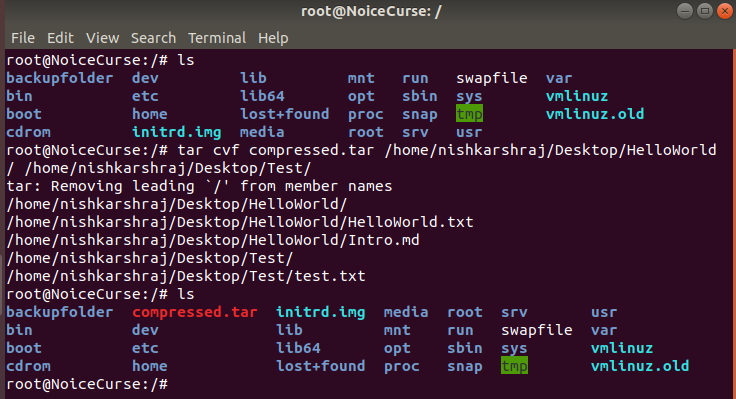 Here, two directories, HelloWorld/ and Test/ are compressed into a single archive file.

Tar tool can be used to create another type of archive file with the extension .tar.gz which follows the GNU Compression algorithm.

It extracts all files in filename.tar.gz directory and stores them in the source file system. 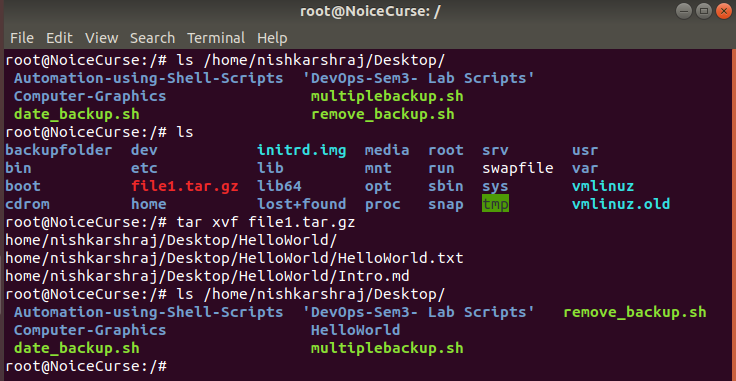 Generally speaking, GNU compressed archived files with extension .tar.gz are more efficient that normal .tar archive files but this is not true for all file systems. 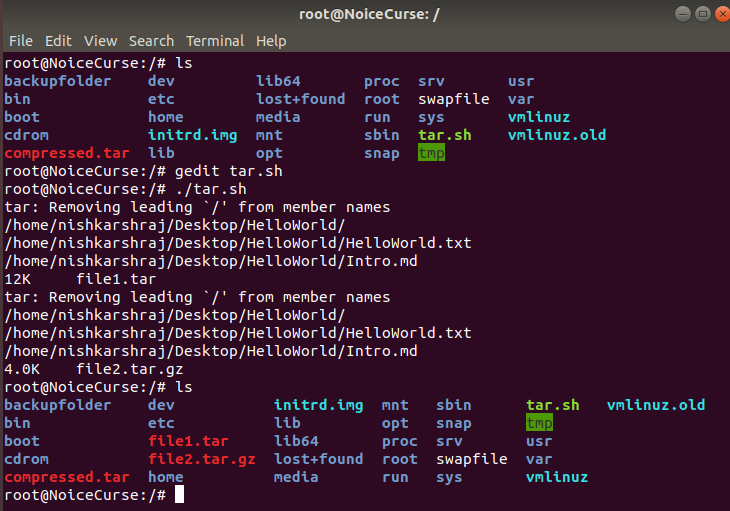 Tar tool can be used to check the difference between the .tar archive file and the source file system.

Lets create an archive file from the same HelloWorld directory called file.tar and then change it to check the diff.

Creation of file.tar for HelloWorld directory 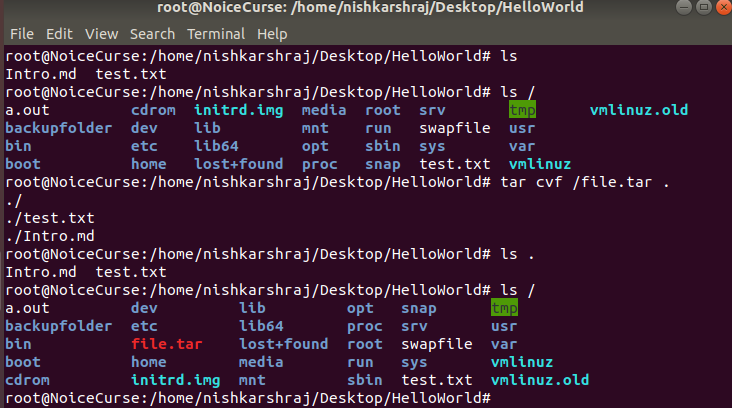 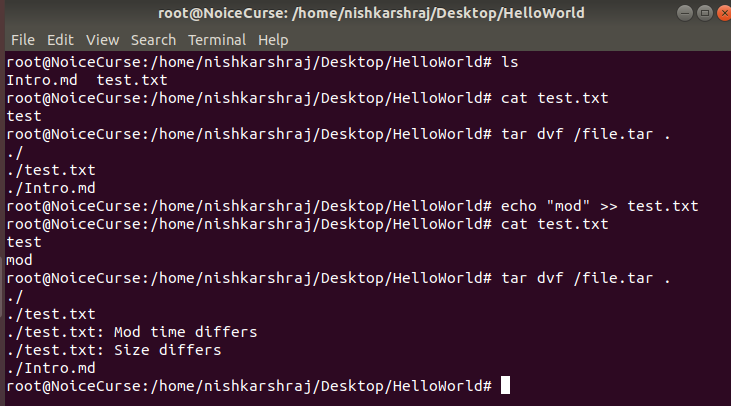 Explanation of the Image

Deleting files from the file system

Check the diff if files are deleted from the file system.

Explanation of the image:

Creation of new files in filesystem

We check the diff of archive and file system by creating new files not existing and thus not mapped in the archive files.

Explanation of the image:

Tar can be used to update the archive file to have the same content as that of the modified source file system having diff with it. 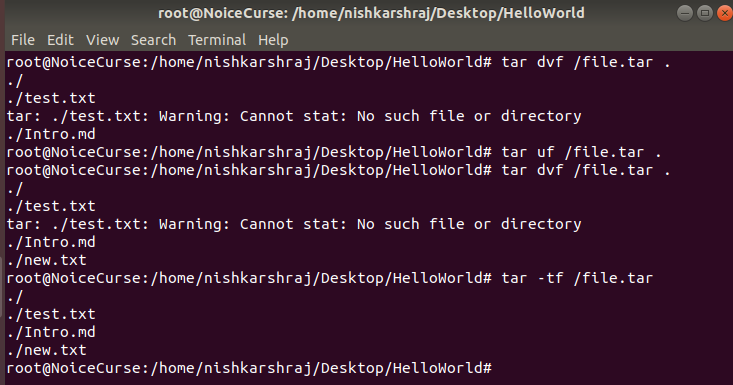 Here, we continue from the last step of diff with a newly created new.txt file and deleted test.txt file as diff with the archive file

The update command for tar tool updates the archived files if they are modified, adds a new file if created but does not remove archived files that are deleted from the source archive system.

A crontab (cronjob) is an open source utility tool supported in Linux like operating systems. Its main task is to schedule the execution of programs written in file.