MLIR is being developed by Google as an open-source project primarily to improve the support of TensorFlow on different backends but can be used for any language in general.

It started with the compiler infrastructure for C. The C compiler takes in a C code and converts it into an Abstract Syntax Tree (AST) which is converted to LLVM IR. AST is a tree data structure where nodes denotes code components like operations and leaf nodes denote data. For example, the abstract syntax tree for a code statement like a+b will be as follows: 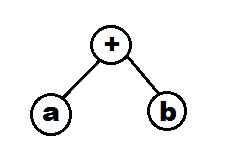 Following this, the abstract syntax tree is converted to LLVM IR (intermediate representation). LLVM is a compiler infrastructure that converts LLVM IR to machine code. LLVM is a commonly used tool and forms a part of most popular languages like C, C++, JAVA, Swift and many others.

So, the flow of C code is as follows:

There are some problems with this compilation strategy of C like:

Other languages like Java and Swift took different paths to resolve this issue.

Java was the first language to tackle this problem and successfully solve it. Java's approach was to convert Java code to Java Byte Code (JavaBC) which is an internall representation of Java. It is in this representation that Java specific and library specific optimizations take place. Following this, Java BC is converted to LLVM IR which is converted to Machine code by LLVM. So, Java's approach was to avoid creating AST which is a generalized representation of any program and hence, created their own format which not only solved C's problem but also made Java the first platform independent language.

A problem with Java's approach was that it became very complex and required deep knowledge of LLVM to take its full advantage. This took the existing resources to its ultimate level to get the best optimizations.

It was a problem for other languages to replicate Java's technique so later, Swift came up with its own approach which became widely adopted.

This was a relatively easy approach and solved all C's original problem. Functionally, it is same as Java's approach. Swift's approach became wildly popular and was adapted into new languages like Rust.

The major problem at this point is that whenever a new language is created, all optimizations such as program flow optimization, data structure optimization and others (which are already done by previous languages) have to be done again. The only layer that differs is the language specific optimizations. Machine level optimizations are taken care by LLVM. So, the entire pipeline has to be created again for each language.

If we see carefully, languages differ only in operation abstraction and internal language specific optimizations. To aid the creation of new languages and libraries, the Google TensorFlow team decided to create MLIR (Multilevel Intermediate Representation).

Actually, the problem was faced in TensorFlow and instead of solving it specificially for TF, Google decided to fix the compiler infrastructure once and for all.

The flow is as follows:

The problem is that for each path (like XLA and TF Lite), developers have to reimplement all optimizations and most of the optimizations are common but code reuse is not possible. This problem will be solved with MLIR.

Hence, the flow of MLIR is captured by this diagram:

Following are the advantages of using MLIR:

Key ideas in MLIR are:

MLIR will be used to improve TensorFlow compiler infrastructure:

The compilation flow will be as follows:

The compilation flow will be as follows:

It will reuse some of the components from TF Lite path

When a new platform P comes in and it has a new backend B, then to convert TensorFlow code is converted to an existing dialect/ IR by using the existing code for TF Lite and XLA. Following it, we need to code a new dialect set/ IR (with custom optimization for the platform) and conversion code for convert it to the IR needed by the platform's backend compiler.

The use of MLIR makes the process more manageable and fast.

MLIR, being a general tool, can use used for other purposes such as:

In this post, we will look at a variety of text preprocessing techniques which are frequently used for a Natural language processing (NLP) task.