In this article, we will learn more about Prim's algorithm and analyze its complexity for different cases and implementation approaches.

Prim's algorithm is one of the greedy algorithms that is used to find the minimum spanning tree of a given graph.

As for Prim's algorithm, starting at an arbitrary vertex, the algorithm builds the MST one vertex at a time where each vertex takes the shortest path from the root node. The steps involved are:

Let us now move on to the example. Let the given be the graph G. 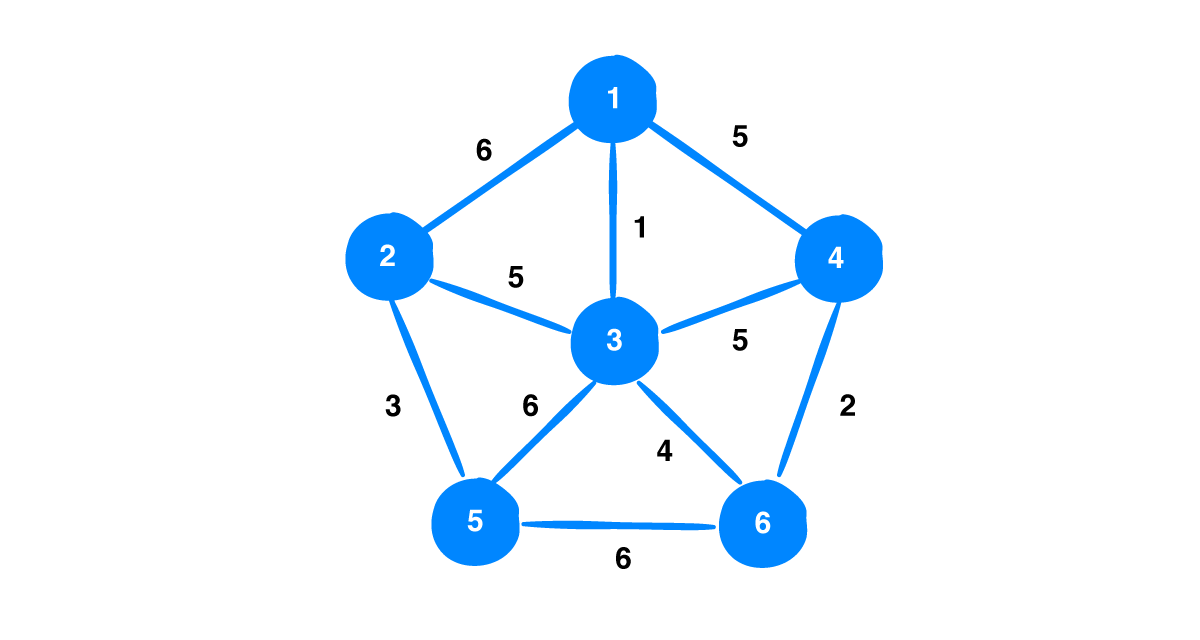 Now, let us choose the vertex 2 to be our first vertex. The weights of the edges from this vertex are [6, 5, 3]. This being a greedy algorithm, it chooses the edge with weight 3 which connects to vertex 5.

The visited vertices are {2, 5}. We move on to the next vertex in our visited list and now the edge list is [6, 5, 6, 6]. And edge with weight 5 is choosen. The edge between vertices 3 and 5 is removed since bothe the vertices are already a part of the solution.

Now the visited vertices are {2, 5, 3, 1, 6} and the edge list is [5, 5, 2]. We choose the edge with weight 4. the edges between vertices 1,4 and vertices 3,4 are removed since those vertices are present in out MST. The Minimum spanning tree that we obtained by using Prim's algorithm for the above given graph G is: 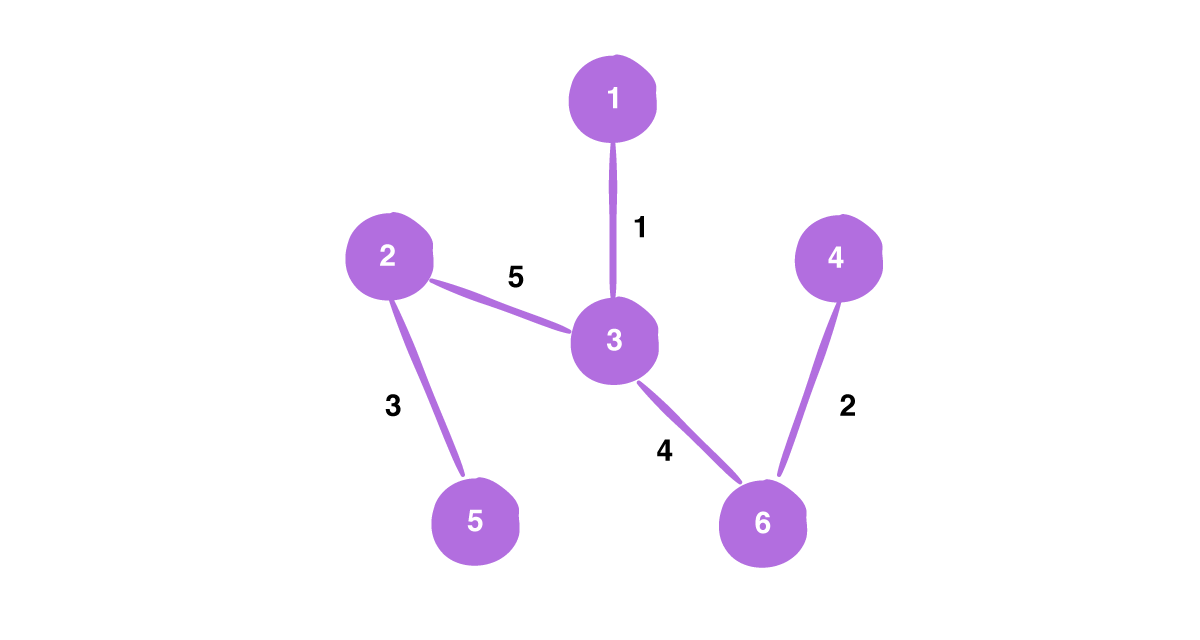 Complexity analysis of an algorithm is the part where we find the amount of storage, time and other resources needed to execute the algorithm. These help in the better understanding of the algorithm and aids in finding ways to execute it efficiently.

Time complexity is where we compute the time needed to execute the algorithm.

First initialize the key values of the root (we take vertex A here) as (0,N) and key values of other vertices as (∞, N). Initially, our problem looks as follows:

The above procedure is repeated till all vertices are visited. Finally, our problem will look like: 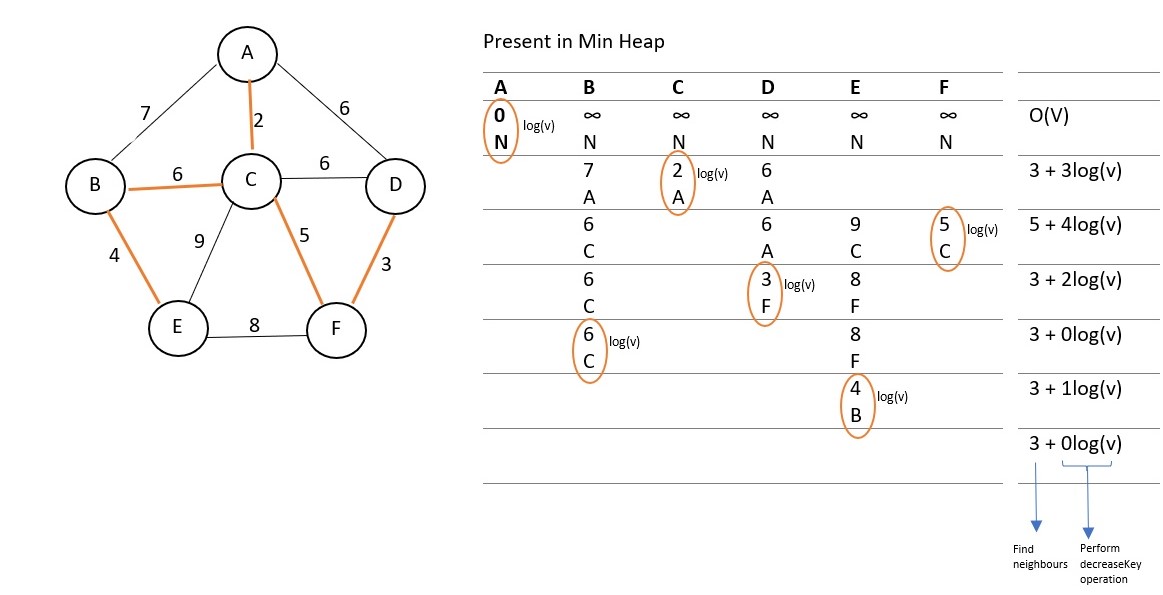 The path traced in orange is the minimum spanning tree.

Since E(log(V)) and V(log(V)) dominate over the other terms, we only consider these. So we get our time complexity as:

Whereas, if we use an adjacency matrix along with Min heap, the algorithm executes more efficiently and has a time complexity of O( E(log(V)) ) in that case as finding the neighbours becomes even more easier with the adjacency matrix.

Fibonacci Heaps is a more sophisticated implementation of heaps. They have some advantages, which greatly reduce their amortised operation cost. In fact all operations where deletion of an element is not involved, they run in O(1) amortised algorithm. However, due to the complicated nature of Fibonacci Heaps, various overheads in maintaining the structure are involved which increase the constant term in the order.

No attempt to link the trees in any fashion is made during insertion, melding. We simply add the node or tree in the doubly linked list. Thus, these operations result on O (1) time. However, during delete all the trees are combined in such a manner such that for a particular outdegree of the root, only one tree is present. This reduces the number of trees and by further analysis it can be shown that number of trees which result is of O(log n).

In this method, the best, worst and average case time complexity of Prim's algorithm is O(E + logV).

While analysing the time complexity of an algorithm, we come across three different cases: Best case, worst case and average case.

It is the fastest time taken to complete the execution of the algorithm by choosing the optimal inputs. In the best case execution, we obtain the results in minimal number of steps.

For example, let us consider the implementation of Prims algorithm using adjacency matrix. The situation for the best case is, when, only the elements in first row or first column are available for usage and other rows or columns are marked as 0. In this scenario, the complexity for this algorithm will be O(v). Where v is the total number of vertices in the given graph.

It is the slowest possible time taken to completely execute the algorithm and uses pessimal inputs. In the worst case analysis, we calculate upper bound on running time of an algorithm. We must know the case that causes maximum number of operations to be executed.

Let us consider the same example here too. The situation for the worst case is, when all the elements in matrix A is considered for searching and marking suitable edges. In this situation the complexity will be O(v2).

In average case analysis, we take all possible inputs and calculate computing time for all of the inputs. We then sum all the calculated values and divide the sum by total number of inputs. We must know or predict distribution of cases.

Space complexity denotes the memory space with respect to input size used up by the algorithm until it is executed fully.

To execute Prim's algorithm, we need an array to maintain the min heap. It takes up space E, where E is the number of edges present. We also need an array to store the vertices visited. It takes up space V , where V is the total number of vertices present in the graph.In the example dexcribed above, these represent the set vertices visited and the edge list. Adding both these will give us the total space complexity of this algorithm. Hence Prim's algorithm has a space complexity of O( E + V ).

In this article, we will discuss greedy methods vs dynamic programming. Both of them are used for optimization of a given problem. Optimization of a problem is finding the best solution from a set of solutions.

Adobe acquired Figma for 20 Billion Dollars but why Adobe paid a huge price during the recession?