Secure Shell(ssh) is a cryptographic protocol for networking that encrypts communication between two remote hosts. In this article, we learn how to safely access a remote server using ssh.

SSH(Secure Shell) is a networking protocol that is used to encrypt communication between two hosts. In the following sections, we will see how to perform a client-side and server-side configuration of hosts and access the remote server using ssh.

The following are requirements for this to work.

We have two hosts, the client, and the server.
The IP address of the server is 192.168.100.62 - this is where we will connect to using the client and it is also where we will install the openssh-server server software package.

Now to test its reachability from our localhost.

Its file system is as follows:

First, we update the remote repositories and the system. For this we write:

Once we have updated and upgraded the system, we install openssh-server package as follows:

Now, let's confirm that it was successfully installed by checking its status:

We can also check its status by writing:

We have confirmed that it was successfully installed, the next step is to start it to check if there are any issues. If successful we can confirm its status and expect to see the value of Active to be running as shown below, highlighted in green.

We also have to update the firewall rules and allow ssh through, for this we write:

After this we should restart ssh to avoid any issues later:

And we are done, now we install ssh on the client and connect to this server.

We update the package repositories and upgrade packages by writing:

The OpenSSH client is a utility for remote logins that uses ssh networking protocol to encrypt communication between to host. We install it as follows:

To confirm a successful installation we write the ssh command and analyze the output:

We should expect output as shown below, this means that we have ssh client installed.

To connect to the remote host we write:

Where user is the host username of the remote host whose IP address is 192.168.100.62. We can also use a hostname since it is easier to remember.

If we encounter such an error, it means that we have an incorrect host key in the ~/.ssh/known_hosts file in the home directory.

As the error states, to solve it we execute the highlighted command above:

After the password has been authenticated, we will be connected to the remote host via ssh.

Notice how the prompt changed? Also, we have the remote file system on our local machine.

We can also check the remote host's IP address:

After we are done we can close the ssh connection on the client-side by using exit as follows:

On the server we stop the ssh server using systemctl command and confirm it is closed by checking its status: 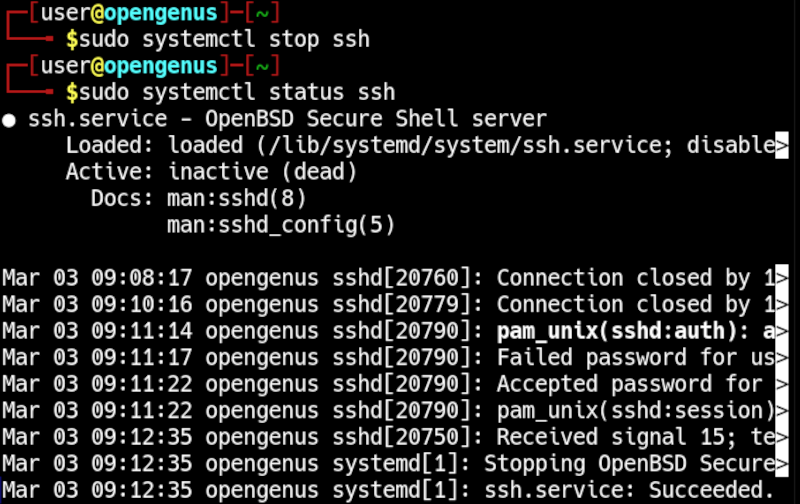 Secure Shell(SSH) is a cryptographic networking protocol used for encrypting communication between two hosts. In this article, we have seen how to access a remote server securely using ssh. We have also seen how the server is configured with ssh and how the client connects to the server.