HashMap<K V> in java.util package implements the Map interface in java collection based on Hashtable, where K is the type of the keys and V is the type of the mapped value. It allows users to store key-value pair, where no duplicate keys are allowed. Order is not maintained as well.

There are three main applications of Hash Map: 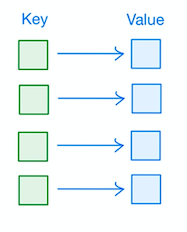 However, unlike Hashtable, it allows us to store null elements. Hence, the elements of a Hashmap could be:

Note that only one null key is allowed. Also, we can't use method get() to judge whether the Hashmap contains certain key since the map may contain a null key. Instead, containsKey() shoud be adopted.

Some of the most often used methods are:

The time complexity of the methods above are all ideally O(1) in general. Hence, it is evident that the most significant advantage of this implementation of Map interface is that it allows for amortized constant time retrieval and insertion of data.

However, the prerequisite of using HashMap is that we can associate our data with a particular key(i.e. we can express our data in the form of key-value pair). Some may argue that ArrayList also allows for amortized constant time access and insertion. The key difference is that ArrayList prvides an index-based operation of data and the adoption of HashMap is preferred when index-based mapping of data is indirect and tedious to maintain.

In conclusion, we normally use HashMap when our major demand is merely accessing, modifying, or deleting data based on Key. For instance, in an application we might want to retrieve information of a user by using the username. Then the use of hashmap is preferred as there is need for fast information retrieval and a one-to-one mapping exist.

In the following paragraph, I will demonstrate the usage of Hashmap in implementing several data structures and algorithms.

A priority queue is an abstract data type in which each element is assigned a priority. The element of the highest priority always appears at the front of the queue.

Here we will demonstrate implementing a priority queue using binary heap. The elements inside a priority queue are only sorted partially, with the "parent" node being more important than both of its "child" nodes. The implementation of heap is based on array. Given that the heap is a complete tree, children of node k are nodes 2k+1 and 2k+2 and parent of node k is node (k-1)/2. For example, in the min heap priority queue demonstrated by the fugure below (the smallest number 1 appears in the front), node 1 (the node of value 3) has its children in position 2+1 = 3 and 2+2 = 4 in the array.

In our implementation of priority queue, we use hashmap to store an element's position in the array as the key and its information about its value and priority as the corresponding value.

The advantage of using HashMap is clear. When adding elements to the priority queue, we need to modify the position of the nodes above each time we "bubbleUp" the node we want to insert. Since we are modifying data frequently, it is preferred to make this operation constant time.

the nodes are partitioned into three sets:

In each iteration of of the Dijkstra's algorithm, we add the node with shortest distance to source node in the frontier set F to the settled set and update the neighboring nodes' distance and backpointer if nececessary.

Thus, we need to have access to the current distance of all the neighboring nodes and may modify their backpointers and distances in each iteration, making declaring a HashMap to contain these information an optimum choice.

Note: the getExits() method returns a list of edges that directs from node F and the getOther() method of object Edge returns the node on the other end of the edge.

Our last example would be implementing topological sort. We want to return a list of nodes in DAG g such that for each edge, its source precedes its sink in the list.

We could find the topological order by understanding the following logic:

HashMap is one of the most often used java collection. In general, we use HashMap if the following criteria is satisfied:

We will use the header file dirent.h for directory structures and objects and implement our pwd command in C/C++. This will involve the getcwd() function call.