You can win the following awards for your Open Source Contributions (can be code or community building):

You shall apply for these and win the prestigious awards. Give it a shot.

This is how a GitHub Star Award looks like: 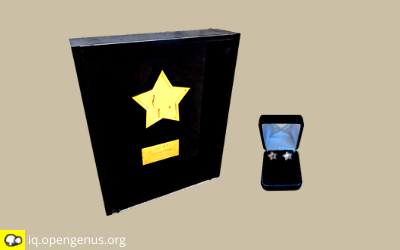 GitHub Star Award is a prestigious award for developers involved in Open Source. It can be awarded to anyone (not even directly involved with GitHub) and has a relatively higher bar compared to other awards.

GitHub is at the forefront of Open Source Communities so this award is very valuable. The winner receive the following items:

This award is presented by RedHat to support Open-Source contributors involved in their activities. Several Students are awarded with this. Every year 2 developers while 10 are recognized as finalists. They are awarded with two types of the award: Community and Academic Award.

One of our Interns, Atibhi Agrawal from International Institute of Information Technology, Bangalore has been a finalist for the "Women in Open Source Award - Academic" in 2020.

This award to presented by Major League Hacking (MLH) (a community of beginners) and is usually, for beginners.

There are three categories of this award:

This award is a prestigious award but is given out to prominent figures in Open Source communities who are behind major open-source projects. Having started in 2005, the award is one of the earliest in this field.

This is a major award. Some of the recent winners were involved with MySQL, PostgreSQL, Moodle and others.

With this article, you must have a clear idea of the awards you can win. Keep contributing to open-source.

In this article, we have explored different types of Network Switching in Computer Network. These include types like Circuit Switching, Message Switching and others.