Consider an art gallery which is shaped in the form of a polygon with n vertices. In the art gallery problem, the objective is to find the minimum number of guards that can be placed inside this polygon or on its edges, such that the entire art gallery is visible to this set of guards. The guards cannot move from the vertices at which they are positioned. However, they have a vision of 360°, which means that they can see all around them as long as a wall (an edge of the polygon) does not obstruct their vision. This problem was first presented by Chávtal in 1975.

In geometry, this problem is as follows: Find the minimum number of guards that need to be placed in an n-vertex simple polygon such that all points within the polygon are visible. (A polygon is a closed shape made up of straight lines. A simple polygon refers to a polygon which does not intersect itself, and which does not have any holes.)

There are multiple types of guards, classified on the basis of the position that they take:

On examining the problem, it is trivial that in case of a convex polygon (a polygon which has all interior angles less than 180°), only one guard is required, and this guard can be placed in the centre of this polygon. There are multiple other cases where only one guard shall suffice, such as a star. 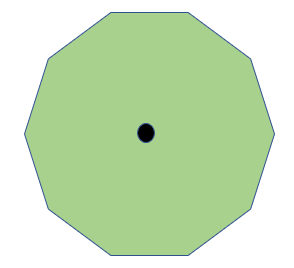 In this example, we can observe that the one guard, (represented by the black dot), will be able to cover the entire polygon. 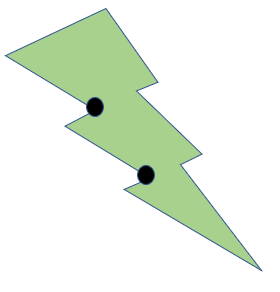 Solution to the problem

The maximum number of guards to guard the art gallery was found to be ⌊n⁄3⌋. This solution was proposed and proved by Chávtal. However, we shall look at a more elegant proof of the same, which was proposed by Steve Fisk. This proof uses triangulation and vertex coloring. We shall describe these in detail.

The Art Gallery Theorem is given to be as follows:

To prove this result, we shall first prove a couple of sub-results, which will then be combined to conclude the theorem.

Triangulation of a polygon is the process of splitting it into non intersecting triangles by means of lines joining its vertices. We shall now prove that triangulation is possible for a non-convex polygon.

We prove this result using mathematical induction. Consider the base case where n = 3. Here, the result is trivial since the polygon under consideration is already a triangle. Now, assume the result is true up to polygons with n-1 vertices.

Consider a polygon with n sides. Now, we know that the sum of the angles of this polygon is (n-2) x 180°. Hence, the number of angles which are convex would be less than n - 2, since the sum of angles would otherwise be greater than (n - 2) x 180°. Hence, there are at least two convex vertices. Consider the line joining these two vertices. If this line does not lie in the interior of the polygon, then slide one of its endpoints towards the other until it encounters a vertex. Then this line would lie inside the polygon. This particular case is illustrated below: 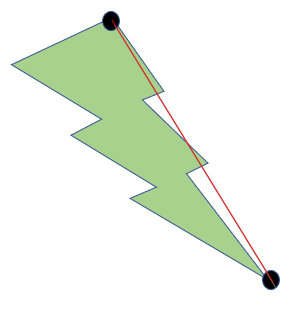 Since the entire line does not lie within the polygon, we slide the line downwards until it lies in the interior of the polygon. Hence, we obtain the following: 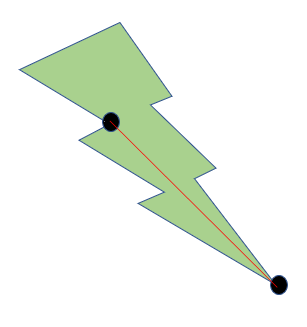 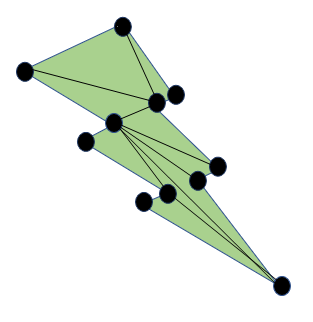 Every non-convex polygon is 3-colorable

A graph is said to be 3-colorable if its vertices can be colored in such a manner that no connected vertices have the same color.

Since triangulation exists for every non-convex polygon. We proceed as follows:

After coloring all vertices in this manner, we obtain a 3-colored graph. An example of the three colored graph for the previous example is as follows: 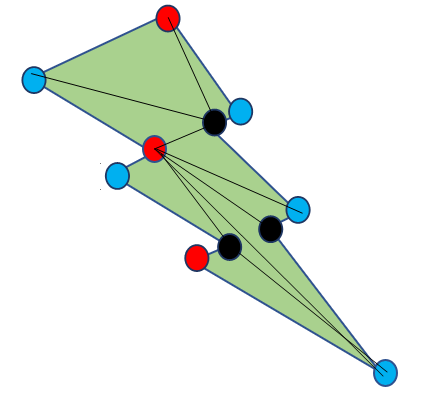 On 3-coloring the polygon, we observe that there is at least one color which appears ⌊n⁄3⌋ times. Hence, placing a guard at each of these vertices would mean that each triangle has at least one guard, and thus the entire polygon gets covered.

Variants of the Art Gallery Problem

There are multiple variants of the art gallery problem, most of which have numerous applications. We shall discuss two such variants here:

Here, we shall take a look at some of the results that were developed for the variants of the art gallery problem. 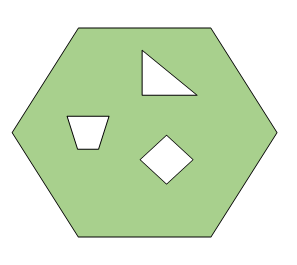 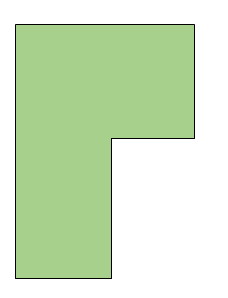 This proof uses the method of convex quadrilateralisation, which is similar to that of triangulation which we followed for the classical art gallery problem.

With this article at OpenGenus, you must have the complete idea of Art Gallery Problem.

In this article, we have explored the Random module in Python in depth and explored the different functions like seed, getrandbits, randrange, choice and much more with Python code examples.