Within computational geometry, we can use polygons as the building blocks to many algorithms. A polygonal curve is a finite chain of line segments, these line segments are called edges and their endpoints called vertices. Using this we can define a simple polygon as a closed polygonal curve with no self-intersection. 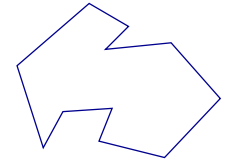 There are numerous topologically different polygons, including convex, monotone, star-shaped or polygons with holes, some can be seen below:

Polygons have unique properties that make them suitable for algorithmic use:

The algorithm that we will be introducing in this article is polygon triangulation, this is to partition a polygon (P) into non-overlapping triangles using diagonals only.

Doing so will reduce a complex shape into a collection of simple ones. This is the first step in many advanced algorithms. Polygonal triangluation finds use in cases such as robotics motion planning, computer vision, mesh generation and more.

The above polygon has 13 vertices, therefore 11 triangles are produced.

To further demonstrate the use of polygon triangulation, we shall examine a classic computer science problem, the art gallery problem. This problem states that given a gallery in the shape of a polygon with N-vertices, what is the minimum amount of guards that can be placed within the polygon or around its edges so that they can observe the entire gallery. The guards cannot move from the vertices they are placed and have a 360 degree field of view, meaning we can deduct they can see entirely around them as long as an edge does not obstruct their vision.

We can see a visualisation of the guards' field of view:

We can find the right number of guards for said polygon using triangulation: 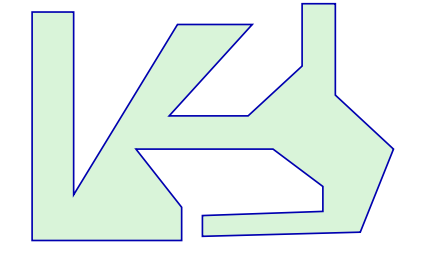 Our art gallery has 22 vertices, the art gallery theorem states that every n-gon can be guarded with n/3 guards at vertices. It also mentions that some n-gons require at least n/3 guards (arbitrary).

In our case that means that the number of guards required for our polygon is 7 as 22/3 equals around 7.33

To prove this generally, we can say that the triangulation of polygons can be 3-coloured. 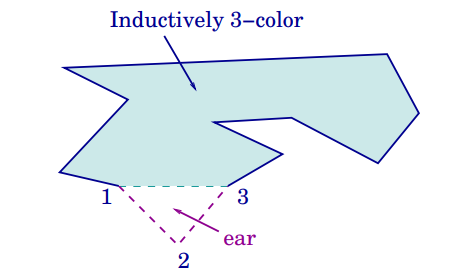 To show this works for an example: 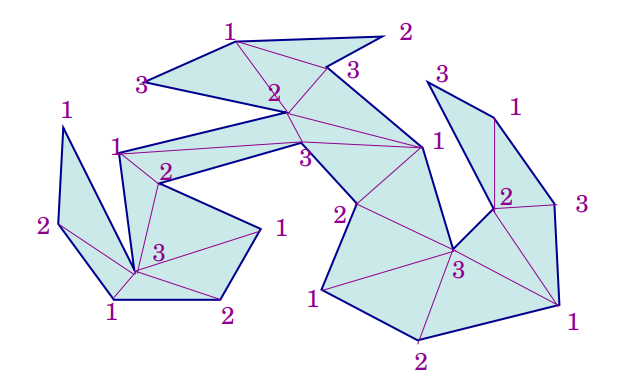 Here we can see that 3 appears the least with 7 times. Therefore we need 7 guards.

There are numerous ways that we can approach polygon triangulation in an algorithm, for example, a naive implementation would be to check n^2 choices for a diagonal n-1 times, with each check taking O(n) giving us an O(n^4) complexity. Another naive method would be to find the ears of the polygon recursively, taking O(n) each meaning that the total algorithm is O(n^2). These are still not very efficient, there is a randomized algorithm that would produce this in linear time however it is very complicated and not always reliable therefore we can settle on a solution that turns out to be O(nlogn).

To do this we should:

To partition the polygon, at each vertex, extend a vertical line until it hits an edge, each face is a trapezoid, which may degenerate into a triangle. This has a complexity of O(nlogn). 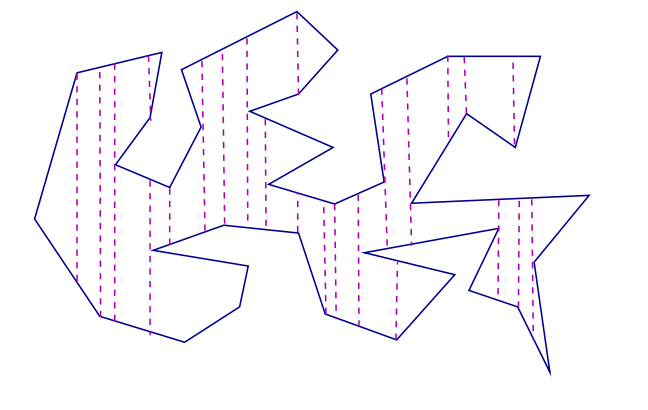 To then conduct monotone subdivision: 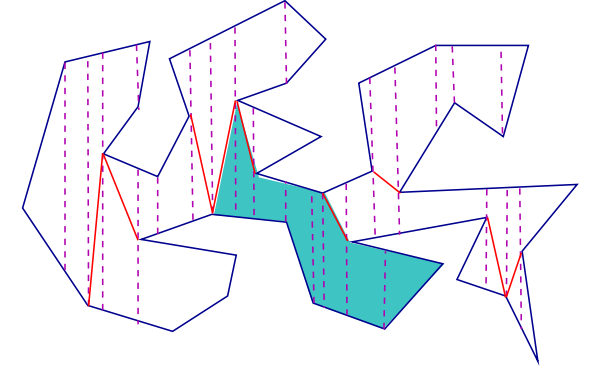 The final stage in our algorithm is the actual triangulation, the pseuodcode for this could be written as such:

To show this in process, see the diagram below: 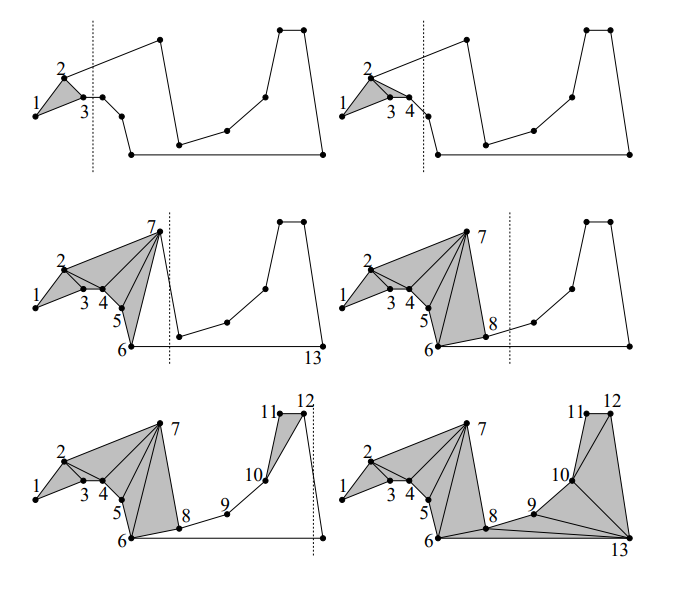 Below is an implementation of this in C++:

Then using triangulate.h in a .cpp file:

In this article at OpenGenus, we have covered polygon triangulation, its uses, solved a problem using it, proved it through induction and then demonstrated how to apply it in algorithmic form and finally, showing a C++ implementation of the algorithm, first writing a header file and then using it in for implementation, ready to be used within a class or similar.

In this article, we will be discussing how to compute the intersection of a set of halfplanes.

In this article, we have explained Applications of Computational Geometry along with topics/ algorithms used to solve a specific problem.