1. The math behind BPTT

Before we start diving into the calculations, we will start by defining a simple recurrent neural network and unfolding it to explain what happens in each time step t during the execution of back-propagation.

Training a neural network requires the execution of the forward and back-propagation pass.
The forward pass involves applying the activation functions on the inputs and returning the predictions at the end , while the back-propagation pass involves the calculation of the objective function gradients' with respect to the weights of the network to finally update those weights.

Before we start computing the derivatives, let's start by recalling the equations for the forward pass.
Note:
For simplicity reasons, we assume that the network doesn't use bias and that the activation function is the identity function (f(x)=x). 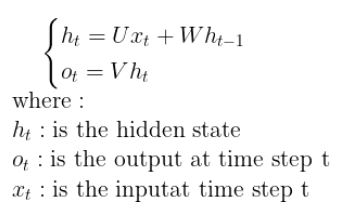 We will consider the objective function L the loss l over time steps from the beginning of the sequence. It is defined by the following equation

Now that the objective function has been defined, we can start explaining the computations made in the BPTT algorithm.
Looking to the top of our RNN architecture, the first derivative that we need to compute is the derivative with respect to the weights V that are associated with the outputs o_t. For that we will be using the chain rule. 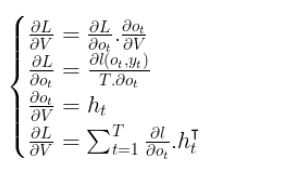 Looking again to the architecture of the network, the next gradient we should compute is the one with respect to W (the weights of the hidden state).
For that let's first consider the gradient of L at time step t+1 with respect to the weights W, using the chain rule we get

However, here the things become tricky because also the hidden state at time step t is dependent on all the past hidden states, so we need their gradients with respect to W and for that we will be using the chain rule for multi-variable function.

So the equation computed before becomes :

Great! now it becomes easy for us to compute the gradient of the objective function L with respect to W for the whole time steps

Awesome! we are now done with the computations, here are the three gradient equations we computed :

In the next section we will see how computing this equation in practice may be problematic.

There are 3 Variations of BPTT:

The above explained method is the full version of back-propagation through time, and actually this version is never used in practical cases because it involves many computations and the equation we gave at the end of the previous paragraph makes the computations very slow and the gradients may either vanish or explode, but why? when the gradients are smaller than 1 the given multiplication makes the results even smaller causing the gradients to vanish, on the other hand when the gradients are big the given multiplications cause the gradients to explode. Knowing that any change in the initialization may lead to one of these two situations, training the RNN then becomes very problematic.

To reduce the computations caused by Full BPTT, researchers suggested to truncate the sums to a certain time step, this method is explained in the two upcoming paragraphs and for the problem of vanishing/and exploding gradients it is suggested to clip the gradients.

The idea is to stop computing the sum of gradients after time step τ, this leads to an approximation of the true gradients and gives quite good results in practice. This version of BPTT is called Truncated Backpropagation Through Time (referred as TBPTT) [2]. As a consequence to this method, the model starts focusing on short term influence rather than long-term ones and with that the model becomes biased. To solve this problem, the researchers suggested to use subsequences with variable length instead of using fixed length subsequences. This method is explained in the following paragraph.

The idea is to use a random variable to generate variable truncation
lengths together with carefully chosen compensation factors in the back-propagation equation. This method is called Anticipated Reweighted Truncated Backpropagation (ARTBP) [3], it keeps the advantages of TBPTT while reducing the bias of the model.

To wrap up what have been covered in this article, here are some of the key takeaways:

We shall be looking at a type of non-relational database called Wide-column stores. Last time, we looked at Time-series databases and we saw how they worked and how to apply them in certain use cases.