Batch normalization or also known as batch norm is a technique used to increase the stability of a neural network. It helps our neural network to work with better speed and provide more efficient results. Batch Normalization was first introduced by two researchers at Google, Sergey loffe and Christian Szegedy in their paper ‘Batch Normalization: Accelerating Deep network training by Reducing Internal Covariate Shift’ in 2015.

Why do we need Batch Normalization?

Now initially this was proposed for the input layer, but it turns out that applying it to the hidden layers was quite helpful. Using batch normalization, the shift in the hidden unit values (i.e. covariance shift) is reduced to a great extent. One example of covariance shift can be this, let us say we prepared and trained a model that tells us whether there is a dog in the input image. If there is a dog, then the output is 1 else 0. Now if the training set contains only the images of black dogs and for prediction, we gave input as the image of a colored dog, then our model would not perform with good efficiency. This is what covariance shift basically means.

Another popular reason for using batch normalization is dealing with vanishing/exploding gradient problem. Let us say we have a certain neural network, now the forward propagation multiplicatively depends on each weight and the activation function. In backpropagation the partial derivatives keep getting multiplied by weights and activation function derivatives. Unless the values are exactly 1, the partial derivatives will either continuously increase(explode) or decrease(vanish). Due to this our networks efficiency goes on decreasing.

How does it work?

Batch normalization is applied to layers that you choose to apply it to. The first thing that happens in batch norm is normalize the output from the previous activation function. This done as follows:

So, here from the output from the activation layer(X), batch mean(M) is subtracted and then the whole thing is divided by the batch standard deviation(S).
After that, batch norm multiplies the normalized output with some arbitrary parameter (say F).

Finally batch norms adds another arbitrary parameter to this above product (say B).

All these parameters like M, S, F and B are all trainable i.e. these will also be optimized during the training process.
The following image shows this process:

In the above example, the first two equations represent the functioning of simple nodes of a Neural network. Then in the third line, the mean subtraction and division by standard deviation takes place. Finally in the last line, the arbitrary parameters gamma and beta are introduced.

Now, the normalization to activations can be done in two formats:

The basic algorithm that can be used in batch norm implementation can be given as follows: 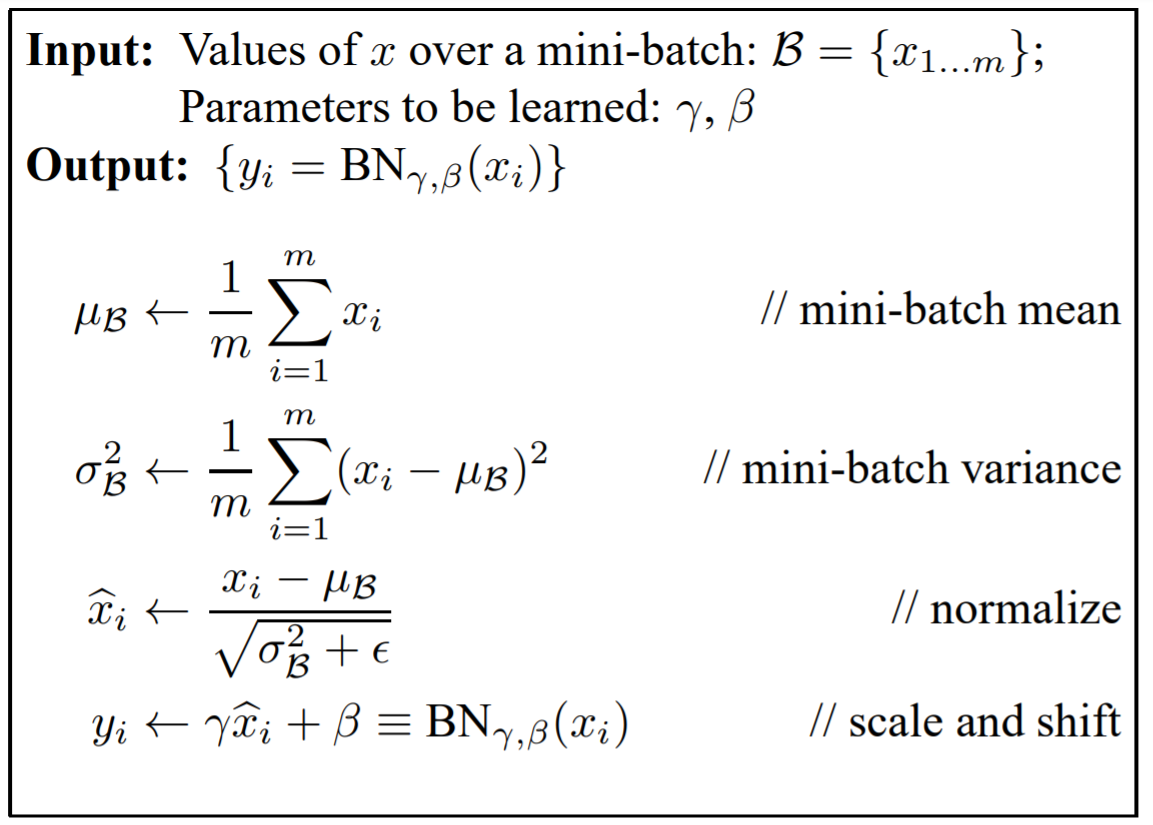 The code for the above algorithm can be written as follows:

Now we will see a simple implementation example of the batch normalization using the keras modules in python.
Here first we will consider a simple neural network with two layers and certain configurations. Consider the python code below:

Now we see that the batch normalization in keras is initialized the way shown above. It is introduced after the layer (here specified after the hidden layer) whose output we want to normalize. For this to work, we are required to import the BatchNormalization from keras.

So this is how most basic implementation of Batch Normalization is done.

In this article, we have presented the most insightful and must attempt questions on Convolutional Neural Network (CNN) along with detailed answers so that you can understand CNN in depth.

In this article, we have discussed about "An embarrassingly simple approach to Zero-Shot learning" and dived into details how to apply this approach that in a single line of code outperforms the state-of-art models.