If you are a competitive programmer you don't need an introduction to coding judge.Most of us use coding platforms like Hackerank,Hackerearth,leetCode,CodeChef for practicing coding or to take part in various contests.Ever wondered how it works?Food for mind, think how your code get's executed and judged accordingly after plagiarism check.

What is an online coding judge?
Online coding judge evaluates the algorithmic source code submitted by the platform users and tests it against various test cases, constraints and plagiarism. It hosts Competitive Programming Contests as well.
In this article at OPENGENUS, you will get the complete idea of System Design of an Online Coding Judge.

For example, let's consider the most commonly used platform for coding i.e HackerRank. There are than 11 million developers who code. On an average there are more than 100k code submissions per day all around the globe and these much of submissions happen within hours at the time of contest!

Important factors should be taken into considerations in the design 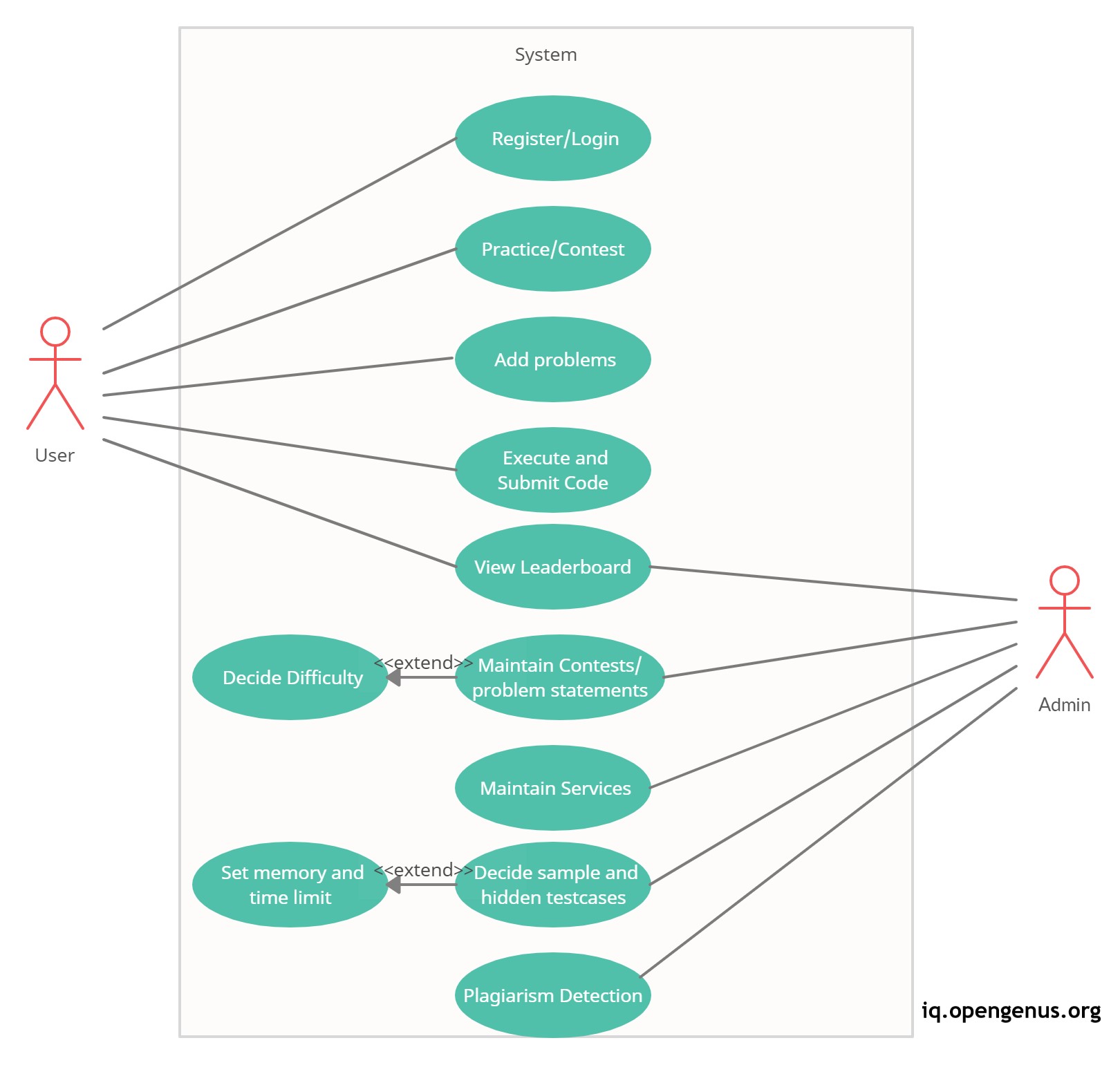 Which database to use?SQL or NoSQL
Why do we need database in coding judges?

Which database to use?
DB has a huge compiler which supports multiple programming languages.
So, as SQL can handle GB's of data effectively SQL is preferred and sufficient. Also, SQL can handle relations effectively in this case. Although,using NoSql seems to be efficient but turns out to be costly for this and there's no need for it in case of online coding judge.

Caching
Caching is needed to reduce the query times. Like in the cases:

Load Balancing
Distributing set of tasks among the set of resources is necessary which in turn makes the overall process efficient.

Load will be high during contests and we need to take this account while deciding on load balancing algorithm. We can keep a simple and cost effective algorithms for regular use and change it at the time of contests to handle extra load.There are several load balancing approaches like round robin,least connection,resource based etc. Round robin is the simplest of all and most used.In this coding judge we have client,application server and database server. We can round robin approach to distribute the requests equally among the servers.

Load balancing algorithm can be changed the time of contests. You may use Weighted roung robin, because it takes into the account of the differing application server characteristics.

Should a different design be enabled during a contest and for other times?
According to me it's a YES. Because the traffic of submission is more at the period of competition and it's more prone to plagiarism. Secondly, the constraints like time limit and memory limit varies according the contest.
Advantages:

Behavior of load systems
It's usual that the requests/submissions are high at the period of contests where's it's comparatively less on other days. The robust load handling system which estimates the usage according to the contests can be implemented to handle this scenario.

Some Complications while using coding judge

How to avoid malicious code?
User is allowed to write any code with wide range of languages support. The code could be malicious too, which can result into attacks and information leak. To avoid that we can use Code-Sand Boxing.Code-Sand boxing simply offers an isolated environment where the users can write their code and execute them without affecting the system.

How does CodeForces/online judge determines whether the solution is correct?
It's impossible for humans to check the code of millions of problems.To evaluate the code,it is tested by a code-checker automatically, not by a human being, and accordingly code has to be written.

For each problem statement, there will be one or more input files which are defined beforehand. Each according to the specifications mentioned in the problem statement, and corresponding correct output files.The bridge between them is the code that is being written and submitted to the online judge. The program is run on each of the input files to check for code versatility and boundary conditions, which is done by redirecting the standard input stream to an input file, and the standard output stream to another file. The output generated by the written program must match the correct output exactly in order to be judged correct.

Operating Systems
Programming languages
Databases
All the mentioned
All the three concepts are really important to build one.

Finally,to put it simple online judges are systems used to assess the algorithms source code written in various languages submitted by the user.They are becoming very popular with wide range of applications.

Hope you had a good time reading the article at OPENGENUS. Keep learning!

Secure Coding in C++ or why we have to use strings and characters in C++ safely? What is C++, what are Strings and Buffer Overflows? And something about software vulnerabilities and exploits

Memory Pool is an optimization technique of allocating a specific amount of memory beforehand and handle all allocation and deallocation of memory from a concerned software system from this pre-allocated memory (which is known as Memory Pool).