This article explains 1-Dimensional Elementary Cellular Automaton, and its applications, and mathematical explanation of concept behind with code in python.

Nature has inspired many fields of study, even in computer science. Genetic Algorithms, Machine Learning etc. Another such field, less known but highly impactful is Cellular Automaton.

This article is a beginner's level introduction to Cellular Automaton with mathematical and coding support. Pre-requisites for reading this article are the motivation to explore a new domain of study, and love of Nature and Computers.

These images explain how Cellular Automaton is not a concept created by Computer Scientists, but exists in nature. Look how patterns similar to Wolfram's Rule 30 of Cellular Automaton (below) is generated in the Textile Cone Shell (above).

What is Cellular Automaton

Cellular Automaton is an evolutionary algorithm, where certain Cell (smallest individual agent of the system) evolves/changes state, based on various rules of evolution. This agent can have multiple states, but exists in a single state at a given time/generation.

If the rules of evolution of a cell's state is based on the state of its neighbors, it is called an Elementary Cellular Automaton.

To simplify things, let us first describe a few things :

Let us consider a 1-D system, i.e. each generation is an array of Cells.
For simplicity, let us take the cell to be either in state Yes(1) or No(0).

Now let us see evolution of a particular cell, Ci

Now, we can assign a rule, for example, if {1,1,0} state is found for Ci and its neighbors, the next Generation of Ci will be 1.

This can be written as a MAPPING,

Note that this forms a rule, which can be abbreviated as an 8 bit binary number, where its ith bit represents the value Bi

Let the Array for tth generation be At. Now, one Dimensional cellular automaton can be viewed as an array (or vector) transformation :

Transform(At,Rn) = At+1
And, the entire system becomes, a 2-D matrix of m generations, each with n cells :

Code for the following transformation in python is

Now, to generate a system, as a Matrix, which contains multiple generations,

If a 1-Dimensional Cellular Automaton evolves based on its 1st and 2nd immediate neighbors(2 cells on both left and right of observed cell), what is the range of the Valid Rules for this system?

1. Fractals Generation
Interestingly, the Sierpinski Triangle is a result of the result of 1-D Elementary Cellular Automaton. It is a result of Rule 90.
Visualization, is 1 for color, and 0 for whitespace, in a 2-D matrix.

Following are some visualizations and their rules mentioned 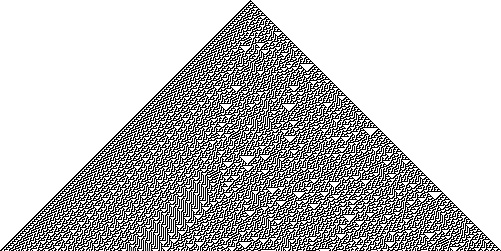 2. Cryptography
Cellular Automaton is also Applied in Cryptography. The Rule 30 Can be used as a pseudo-random number generator.
I have worked on the cryptography application of the topic, and the code, theory and analysis of the same can be found here.

Notice now the wolfram's rule 30 image above can be random if initial conditions are changed. Using this, if we use a seed value for the initial conditions of Wolfram's Rule 30, we can get a Pseudo Random Number Generator, which can be used for Encryption. This is the basic idea of the algorithm for encryption provided in the github repository here.

4. Computer Processors
Multiple 1-D and 2-D Cellular Automaton systems have been proven Turing complete. This implies cellular Automaton systems, can be built as a processor.
There has been no existing implementations, but it can be argued, that taking quantum states of individual particles as CA States, or mimicing inter-cellular interactions by charge transfer, magnetism, vibration etc., nano-processors, or even quantum processors can be a reality.

5. Compression, Simulation, Graphics and Music Generation
This is another interesting application of cellular automaton. It is able to simulate simple multi-agent independent systems, dynamic models like fluid flows etc. Cell Automation is used in image and Data compression also. Olu Lafe has written an excellent paper in this domain (link). It is also used in multimedia generation. Below is a video of generating piano music using 1-D cellular automaton system.

In this article, we learnt about Cellular Automaton on an elementary level. This article's intention was to get us started towards cellular automaton, and try out some cool applications too maybe!

The next level of this is the 2-D cellular transform, and then 3-D cellular transform and Cellular Automaton Transform (CAT). If you found this interesting, then do explore the 2-D variant, and there will you find the Game of Life (repo providing nice visualization, moderate explaination and code in javascript for the Conway's Game of Life),a zero player game, which has a lot to offer.

Concept Whitening is a technique that can be used to find the inner functioning. The difference in its approach is that rather than searching for solutions in the trillions of trained parameters it tries to find answers by interpreting the networks.