In this article, we examine the relationship between Farideh Firoozbakht's famous conjecture about prime numbers, which states that the sequence

is the nth prime number, is strictly decreasing, and the prime gap function

which is the difference between the nth and (n + 1)th prime numbers. Furthermore, Firoozbakht's conjecture is linked to upper limits for the prime gap function in terms of n. Asymptotic outcomes for both the conjecture and the function help us understand the interrelationships.

Farideh Firoozbakht's initial conjecture in 1982 was that the sequence

and the first few values of

and the speculation has been confirmed for all primes less than 4x(10)^18.

Following are some alternative formulations of the hypothesis. Here n∈N.

These are easily provable by direct analysis and are by no means a complete list. The left hand side of (2), however, is the nth prime gap

, and if the conjecture is correct,

is an upper bound in terms of n for

is found to be

. (1) may also be used to improve on the Baker-Harman-Pintz's upper bound of

in terms of n will be showed, but for the time being, we will focus on certain known findings that give an approach to demonstrating (1).

Evidence to back up the conjecture

Proving (1) for infinitely many n∈N:

Outcome: There exists an infinite number of n∈N such that

Then, according to Zhang's Theorem, T is infinite and

Specifically, for any sufficiently big n∈T,

. This is identical to the statement of the theorem. Thus,
Zhang’s Theorem ⇒ (1) applies for infinitely many n ∈ N

In order to prove this statement, we will require the following two well-known theorems.
Theorem 1: Let us consider the set of the first n−1 differences between consecutive primes, i.e

be the number of differences in this set such that

where ϵ > 0 is fixed. We then have the limit

is the number of differences in this set such that

. That is, practically all of the set's differences

, derives directly from the formula exp(x)=1+x+o(x)(x→0). The theorem is proved.
Outcome: The inequalities in (1) to (4) hold for practically all successive prime pairings

Proof: According to Theorem 2, since

is asymptotically comparable to

.
Furthermore, theorem 1 with ϵ=12 shows that for nearly all pairs of successive primes

holds for almost all pairings of consecutive primes

, is inextricably linked to Firoozbakht's conjecture. There are a few speculative upper bounds on

.
It is proved that

It can also be proven that

Following the demonstration of the previous implication, we shall show how (1) follows from the assumed reality of another such conjectural upper bound, one of a family of such bounds.
Outcome:

Proof: We notice that (1) has been proven for all primes less than 4x(10)^18, which is why we include it in the stated condition.
Using the Panaitopol formula for π(x), we get an upper bound for the prime-counting function π(x), which is provided by: 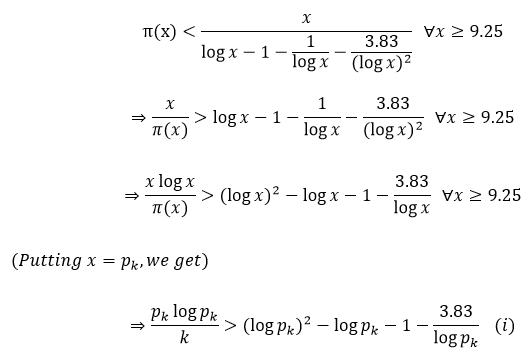 We are not including our x ≥ 9.25 constraint since we are examining primes higher than 4x(10)^18, and primes up to the limit have already been proven to obey the conjecture. As a result, the primes in question are large enough.
We know using calculus,

Thus we get from the given inequality,

which is (4), one of the equivalent forms of (1). As a result, we have demonstrated that if the higher bound indicated above holds, then (1) is true.
There are two additional conjectured upper boundaries for

, which are as follows:

and the truth of either of these two implies (1).

Program to verify the conjecture

Following is a C++ Program to verify the conjecture:

The above C++ program will yield the following output: 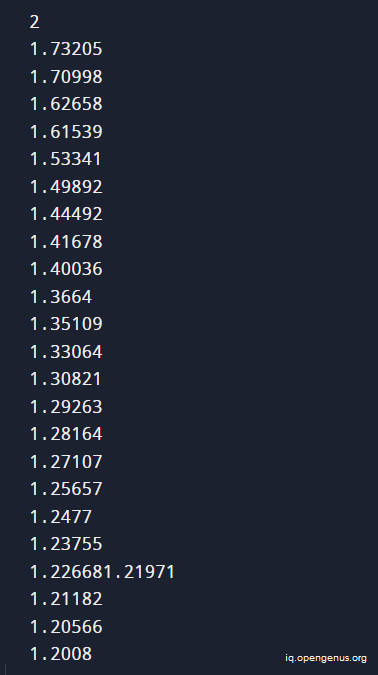 The series keeps on decreasing for a large range and hence the conjecture can be proved till that given range. You can run it continuously till two consequtive elements increase (which will disprove the conjecture).

These techniques are used to verify conjectures till a given limit.

Three more conjectures were proposed in relation to the Firoozbakht Conjecture.
The Nicholson Conjecture-

To see how these conjectures connect to the Firoozbakht Conjecture, consider the following inequalities:
Theorem 1:

This inequality is know as the Rosser’s Theorem.

which is the same as

This corresponds to the Firoozbakht Conjecture. Taking logarithms out from previous inequality, we get

When we increase to the n-power, we obtain

which is the Forgues Conjecture.

The Firoozbakht conjecture is one of the most powerful upper limits on prime gaps, rivalling the Cramér and Shanks conjectures. Cramér predicted that the gaps around p are no larger than

, while Shanks proposed the asymptotic equivalence

In this article, we have presented two algorithms to select a random node from Binary Tree while maintaining the uniform randomness.

The law of large numbers is one of the intuitive laws in probability and statistics.