Heisenbug is a term commonly used in Computer Programming to refer to a bug (or program error) which disappears when an attempt to find the source is made.

It is inspired by Heisenberg Uncertainty Principle in Quantum Mechanics which states that accuracy of position and momemtum of a particle is inversely related. It means

We have covered some techniques to solve a heisenbug as well at the end. The main problem with Heisenbug is that:

Appearance of the term

A paper titled "Why do Computers stop and what can be done about it?" by Jim Gray, Turing Award winner which was published in June 1985.

A sub-title in his paper was as follows: "Software faults are soft - the Bohrbug/Heisenbug hypothesis". In this section, we explains the difference between bohrbugs and heisenbugs and some of the experiments he has done to isolate heisenbugs.

Nothing quantitative come out of his experiments though. He explained how heisenbugs can be used by System developers to develop fault tolerant softwares.

Read this paper by Jim Gray: here on CiteSeer

Note that the term "Heisenbug" existed before the use by Jim Gary and appeared on some previous research papers on ACM as well. It is believed that the term was coined within IBM during the 1950s.

Bohrbug and Heisenbug are related terms but are used in different sense. The difference has been covered by Jim Gray as well. The basic difference is as follows:

How to solve a Heisenbug?

Solving a Heisenbug requires some serious skills and concentration on the part of a Software Developer. There is no standard set of techniques but a few common techniques that have proven to be useful while solving numerous heisenbugs are:

The focus is to ensure that no other process is interfering with our process. Common techniques are to use "htop" on Linux.

To do this using OpenMP is to set:

Similar to our previous point, GPU gives performance boost but softwares, by default, may not be able to support GPU or use all available resources correctly. Turn off GPU on your system and try running on CPU.

This is to ensure that the heisenbug is not coming from the System architecture issue as it is, often, seen that inter-connections between different NUMA nodes can become unstable.

To do this, use the following command:

The focus is to ensure that heisenbug is not coming from any external software component. Try using vanilla versions or previous stable versions. For example, instead of using Intel optimized TensorFlow with DNNLv1.1, one shall try with Vanilla TensorFlow (built from source or installed using pip).

This is a common technique where one removes software features one by one and try to figure out the feature that is the source of heisenbug. This can be challenging as heisenbug may be coming from a specific set of features together.

This meme summarizes the idea of Heisenbug: 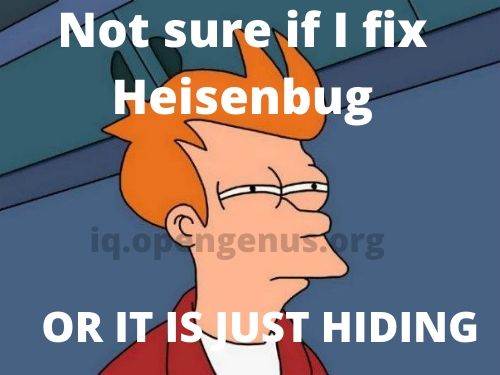 In this post, we will learn to create different tables using Bootrap. It provides a clean layout for building tables. Bootstrap has a number of default classes which will be used.

Rate limiting is a powerful feature that secures the backend API from malicious attacks and is also used for handling unwanted traffic(requests) from the user.