Image to image translation is a class of computer vision and graphics, & deep learning problems where the goal is to learn the mapping between an input image and an output image using a training set of aligned image pairs.

Obviously, for most tasks, paired training data won't be available because: 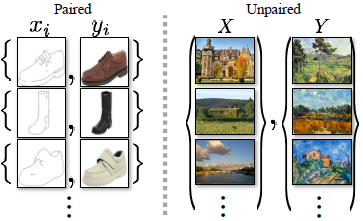 In the image above, paired training data (left) consists of training examples where the correspondence between and exists.

Unpaired training data (right), consists of a source set and a target set , with no information provided as to which matches which .

A need for an algorithm was felt which could learn to translate between domains without using paired input-output examples.

They presented an approach for learning to translate an image from a source domain to a target domain in the absence of paired examples.

The above image illustrates the basic idea of the algorithm - Given any unordered image collections and , the algorithm learns to automatically "translate" an image from one into the other and vice versa.

They assumed that there is some underlying relationship between the domains - for example, that they are different renderings of the same underlying scenery - and sought to learn that relationship.

Though they lacked supervision in the form of paired examples, they exploited supervision at the set-level:
Given one set of images in domain and a different set in domain , the authors trained a mapping such that the output is indistinguishable from images by an adversary which is trained to classify from .

This mapping was found to be highly under-constrained, so they coupled it with an inverse mapping and introduced a cycle consistency loss to enforce and .

"Cycle consistent", in easy words, means if we translate a sentence from, say, English to Hindi, and then translate it back from Hindi to English, we should arrive back at the original sentence.

In mathematical terms, if we have a translator and another translator , then and should be inverses of each other, and both mappings should be bijections.

To make things clearer and so that you understand the concept properly, let's understand how the CycleGAN model proposed by the authors works, using a visual.

a) The model contains mapping functions and , and associated adversarial discriminators and .

encourages to translate into outputs indistinguishable from domain , and vice versa for and .

For the purpose of regularizing the mappings, cycle-consistency losses are introduced, which capture the intuition that if we translate one domain to the other and back again, we should arrive at where we started.

b) Forward cycle-consistency loss: , and

As explained earlier, the goal of CycleGAN is to learn mapping functions between domains and given training examples where and where .

Let's denote the distributions as and .

The model includes mappings and .

Also, adversarial discriminators and are introduced, where aims to distinguish between images and translated images ; similarly, aims to discriminate between and .

Two kinds of losses are made use of -

✪ Adversarial losses - for matching the distribution of generated images to the data distribution in the target domain, and

✪ Cycle-Consistency losses - to prevent the learned mappings and from contradicting each other.

➢ Here, tries to generate images that look similar to images from domain , while aims to distinguish between translated samples and real samples .

➢ aims to minimize this objective against an adversary that tries to maximize it, i.e.,

➢ Similarly, the adversarial loss for the mapping function and its discriminator is:

➢ For each image from domain , the image translation cycle should be able to bring back to the original image, i.e. .

This is called forward cycle-consistency.

➢ Equivalently, for each image from domain , and should also satisfy backward cycle-consistency: .

➢ The cycle consistency loss can thus, be defined as: 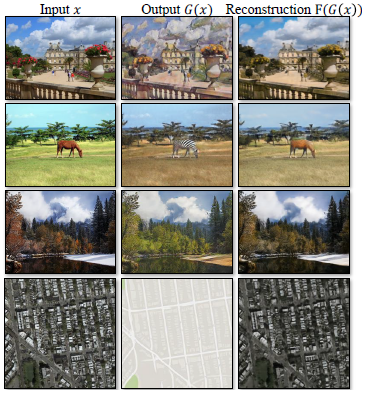 The above image shows the input images , output images and the reconstructed images from various experiments.

➢ The full objective function can be spread out as:

where controls the relative importance of the objectives.

➢ The aim is to solve the following:

➢ A CycleGAN is made up of architectures - a generator and a discriminator.

➢ The generator architecture is used to create models, Generator A and Generator B.

⚫ The generator network is akin to an autoencoder network - it takes in an image and outputs another image.

⚫ It has parts: an encoder and a decoder.

⚫ The encoder contains convolutional layers with downsampling capabilities and transforms an input of shape to an internal representation.

⚫ The decoder contains upsampling blocks and a final convolutional layer, which transforms the internal representation to an output of shape .

❂ The convolutional block contains a convolutional layer, followed by an instance normalization layer, and ReLU as the activation function.

❂ The addition layer which is the concluding layer of this block calculates the sum of the input tensor to the block and the output of the last batch normalization layer.

❂ The upsampling block contains a transpose convolutional layer and uses ReLU as the activation function.

❂ There are upsampling blocks in the generator network.

❂ The last layer is a convolutional layer that uses Tanh as the activation function.

❂ It generates an image of shape .

⚫ What it basically does is, take in an image having shape and predicts whether the image is real or fake.

⚫ It contains several ZeroPadding2D layers too.

⚫ The discriminator network returns a tensor of shape .

⚫ CycleGANs have a training objective function which we need to minimize in order to train the model.

⚫ The loss function is a weighted sum of losses:

Please refer to the Formulation section above to learn about these loss functions.

➤ The FCN score from [12] was adopted, and used to evaluate the performance of the CycleGAN on the Cityscapes labels photo task.

➤ The FCN metric evaluates how interpretable the generated photos are according to an off-the-shelf semantic segmentation algorithm (the fully connected network, FCN, from [11]).

➤ The FCN predicts a label map for a generated photo.

➤ Different models and architectures were trained alongside the CycleGAN so that a comprehensive performance evaluation could be made.

III) Comparison against the baselines

The image above illustrates the different methods for mapping labels photos trained on Cityscapes images. 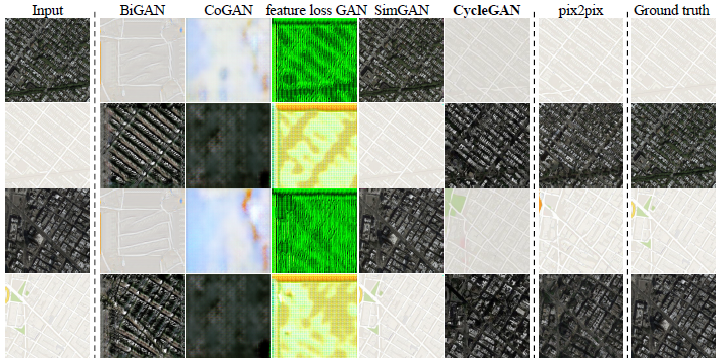 It is obvious from the renderings above that the authors were unable to achieve credible results with any of the baselines.

Their CycleGAN method on the other hand, was able to produce translations that were often of similar quality to the fully supervised pix2pix.

Here, we see that the CycleGAN method can fool participants on around a quarter of trials, in both the maps aerials photos direction and the aerial photos maps direction at x resolution.

Table 2 evaluates the perfomance of the labels photo task on the Cityscapes and Table 3 assesses the opposite mapping (photos labels).

In both cases, the CycleGAN method again outperforms the baselines. 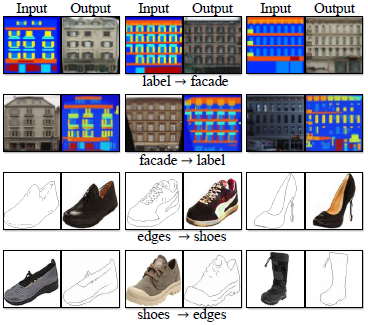 Shown above are example results of CycleGAN on paired datasets used in "pix2pix", such as architectural labels photos (from the CMP Facade Database) and edges shoes (from the UT Zappos50K dataset).

The image quality of the CycleGAN results is close to those produced by the fully supervised pix2pix while the former method learns the mapping without paired supervision.

Implementation of CycleGAN in Keras

The entire working code of the CycleGAN model adds up to around 400 lines of code in Python, which we obviously won't manifest here.

But, we will show you how the Residual block, the Generator and the Discriminator networks are implemented, using the Keras framework.

You can find the entire code for the CycleGAN model at this link.

The CycleGAN method is demonstrated on several use cases where paired training data does not exist.

It was observed by the authors that translations on training data are often more appealing than those on test data. 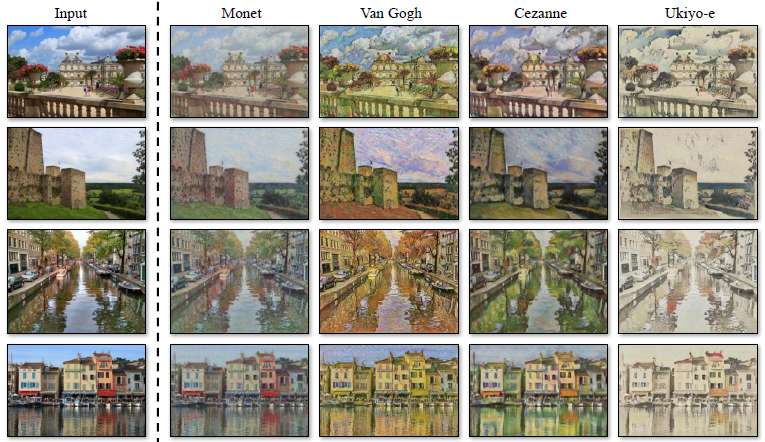 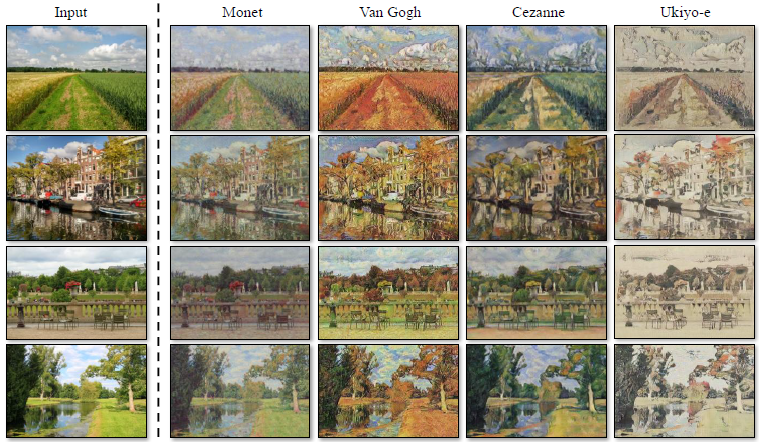 The model was trained on winter photos and summer photos of Yosemite, downloaded from Flickr.

The images below portray the relatively successful results on mapping Monet's paintings to a photographic style. 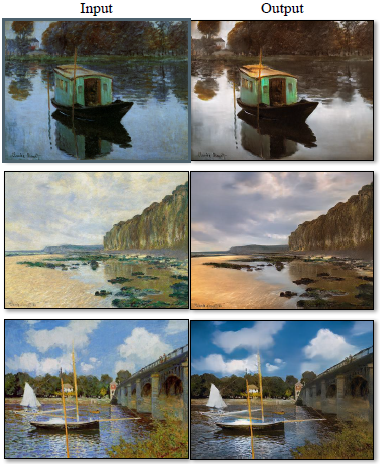 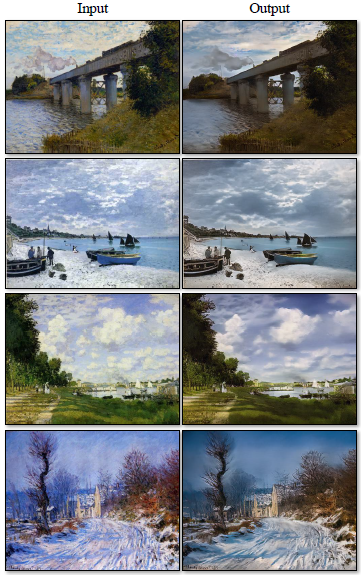 So that was it, dear reader. I hope you enjoyed the article above and learnt how CycleGANs can generate realistic renditions of paintings without using paired training data.

Follow me on LinkedIn and Medium to get updates on more articles ☺ .

In this article, we explored the use of headings in HTML. There are 6 levels of HTML and different attributes like nowrap

In this article, we will learn to use Python's inbuilt debugger, PDB and do various things with it and use it to find a bug in a real program and resolve it