Ivan Edward Sutherland is a computer scientist, professor, entrepreneur and Turing Award Winner and is widely regarded as the Father of Computer Graphics. He has received numerous awards over the years and has over 60 patents. He has been associated with top universities like Harvard University, Massachusetts Institute of Technology and others and has been working at Sun Microsystems. He founded two companies namely Evans and Sutherland and Sutherland Sproull and Associates

He has driven the Computer Graphics field to mainstream development and has laid the foundations of Virtual Reality as well which is one of the promising growing fields. 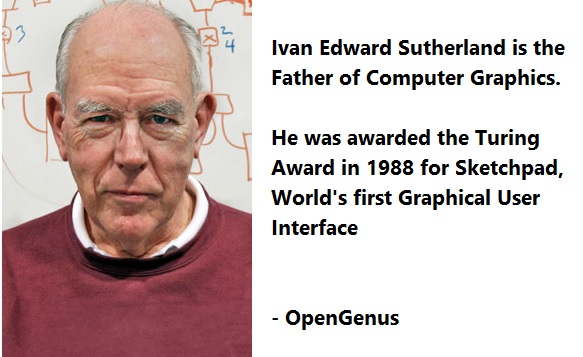 Over the years, he has worked on a variety of fields including:

Computer Graphics refer to the field of rendering visual images and videos on computers and how computers deal with visual information. Even, we have developed specific acceleration hardware for computer graphics known as Graphics Processing Unit (GPU).

Following image illustrates the evolution of Computer Graphics over the years:

At MIT, his supervisor was Claude Shannon, the inventor of information theory. They decided to work on SAGE air defence project which needed computers that were fast and had graphical inputs and output. The light pen was invented for the SAGE project but the output displays were crude adaptations of radar displays.

They built the TX2 which used transistors and an array of real time input and output devices in 1959 and was a 38-bit word machine with a 68Kword main memory.

It is the world leader in providing flying simulators for pilot training shipping equipment worth $150 million.

“Young people are wonderful. They don’t know what they can’t do, so they go ahead and do it.” - Ivan Edward Sutherland

A skip list is a data structure that is used for storing a sorted list of items with a help of hierarchy of linked lists that connect increasingly sparse subsequences of the items. A skip list allows the process of item look up in efficient manner. The time complexity of operations are O(log N)

Octree is a tree data structure where each internal node has 8 children. An octree is generally used to represent relation between objects in a 3-dimensional space. It is used in 3D computer graphics. Octrees are also used for nearest neighbor search which can be done easily in logarithmic time.