Following is the overview of the elegant Java Memory Model:

Do understand that it is one big chunch of memory which is physically uniform but has been distinctly splitted from a software perspective to ensure efficient usage and organization of memory. We will explore each section in detail in our quest of efficient memory management.


Doing a garbage collection entails stopping the application completely. The more objects there are, the longer it takes to collect all the garbage.

What if we would have a possibility to deal with less objects?

Investigating the possibilities, a group of researchers has observed that most allocations inside applications fall into two categories:

These observations come together in the form of Weak Generational Hypothesis. Based on this hypothesis, the memory inside the Virtual Machine is divided into the Young Generation and the Old Generation (Tenured).


Java Virtual Machine (JVM) memory is divided into separate parts to classify memory spaces based on usage. The key idea is to quickly identify the approximate usage of a particular object and consider objects only of a particular interest.

The user does not have much control over the third space PERM which we will explore further in our quest.


Prior to Java 8 there existed a special space called the ‘Permanent Generation’. This is where the metadata such as classes were located.

It is quite hard to predict how much space all of that would require. Result of these failed predictions took the form of java.lang.OutOfMemoryError: Permgen space. Unless the cause of such OutOfMemoryError was an actual memory leak, the way to fix this problem was to simply increase the permgen size similar to the following example setting the maximum allowed permgen size to 256 MB:


As predicting the need for metadata was a complex and inconvenient task, the Permanent Generation was removed in Java 8 in favor of the Metaspace. From this point on, most of the miscellaneous things were moved to regular Java heap.

The class definitions are loaded into Metaspace. It is located in the native memory and does not interfere with the regular heap objects. By default, Metaspace size is only limited by the amount of native memory available to the Java process. This saves developers from a situation when adding just one more class to the application results in the java.lang.OutOfMemoryError: Permgen space.

In case you still wish to protect yourself for such occasions you can limit the growth of Metaspace similar to following, limiting Metaspace size to 256 MB:

Thus, currently, if you are using Java 8 or onwards, your memory space is divided such as: 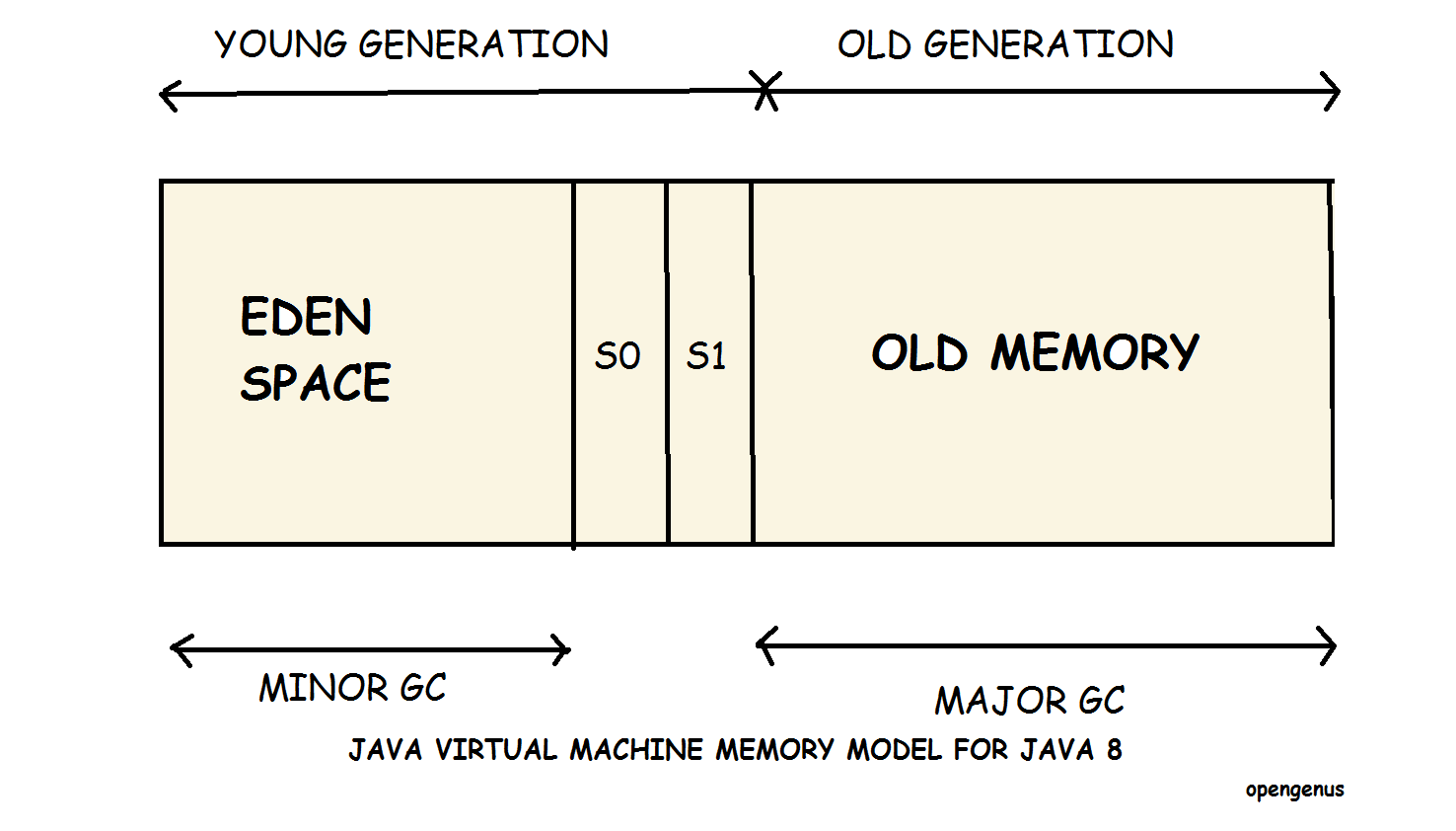 
Whenever sweeping takes place, the JVM has to make sure the areas filled with unreachable objects can be reused. This can (and eventually will) lead to memory fragmentation which, similarly to disk fragmentation, leads to two problems:

Write operations become more time-consuming as finding the next free block of sufficient size is no longer a trivial operation.
When creating new objects, JVM is allocating memory in contiguous blocks. So if fragmentation escalates to a point where no individual free fragment is large enough to accommodate the newly created object, an allocation error occurs.
To avoid such problems, the JVM is making sure the fragmenting does not get out of hand. So instead of just marking and sweeping, a ‘memory defrag’ process also happens during garbage collection. This process relocates all the reachable objects next to each other, eliminating (or reducing) the fragmentation. Here is an illustration of that:

Now, you have a clear idea regarding how management and classification of memory can lead to better memory usage for client and server applications.


Where is a newly declared variable allocated memory?

Quickhull is a method of computing the convex hull of a finite set of points in the plane. It uses a divide and conquer approach. It was published by C. Barber and D. Dobkin in 1995. average case complexity is considered to be Θ(n * log(n))