In this article, we discuss the first phase in compiler designing where the high level input program is converted into a sequence of tokens. This phase is known as Lexical Analysis in Compiler Design.

Lexical analysis is the process of converting a sequence of characters from a source program which is taken as input to a sequence of tokens.

A lex is a program that generates lexical analyzers.

The roles of lexical analyzer entail;

Lexeme is an instance of a token, that is, a sequence of characters included in the source program according to the matching pattern of a token.

The lexemes and tokens are;

The sequence of tokens produced by the lexical analyzer enables the parser to analyze the syntax of a programming language.

A pattern is a rule matched by a sequence of characters(lexemes) used by the token. It can be defined by regular expressions or grammar rules.

An example of Lexical Analysis

The process of lexical analysis constitutes of two stages.

The main task of the lexical analyzer is to scan the entire source program and identify tokens one by one.
Scanners are implemented to produce tokens when requested by the parser.

We use regular expressions to express finite languages by defining patterns for a finite set of symbols.

Representing valid tokens of a language in regular expressions.

X is a regular expression, therefore;

This is the combination of five tuples (Q, Σ, q0, qf, δ) focusing on states and transitions through input symbols.
It recognizes patterns by taking the string of symbol as input and changes its state accordingly.
The mathematical model for finite automata consists of;

Finite automata is used in lexical analysis to produce tokens in the form of identifiers, keywords and constants from the input program.

Finite automata feeds the regular expression string and the state is changed for each literal.

If the input is processed successfully, the automata reaches the final state and is accepted otherwise it is rejected.

Let L(r) be a regular language by some finite automata F(A). 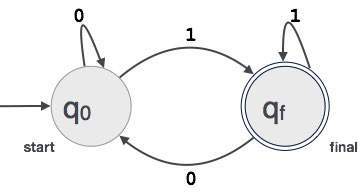 The relationship between regular expression and finite automata is as follows;
The figure below show that it is easy to convert; 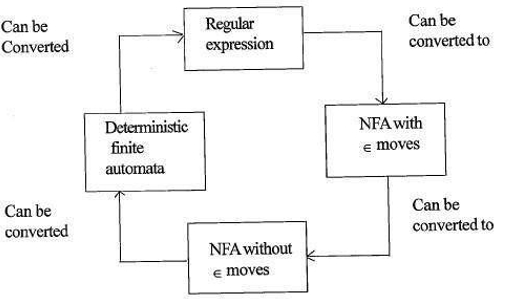 It states that the lexeme scanned should be determined based on the longest match among all available tokens.
This is used to resolve ambiguities when deciding the next token in the input stream.
During analysis of source code, the lexical analyzer will scan code letter by letter and when an operator, special symbol or whitespace is detected it decides whether a word is complete.

While scanning the above, the analyzer cannot determine whether 'int' is a keyword int or the prefix of the identifier intvalue.
Rule priority is applied whereby a keyword will be given priority over user input, which means in the above example the analyzer will generate an error.

A lexical error occurs when a character sequence cannot be scanned into a valid token.
These errors can be caused by a misspelling of identifiers, keywords or operators.
Generally although very uncommon lexical errors are caused by illegal characters in a token.

Panic mode recovery.
In this error recovery scheme unmatched patterns are deleted from the remaining input until the lexical analyzer can find a well-formed token at the beginning of the remaining input.
Easier implementation is an advantage for this approach.
It has the limitation that a large amount of input is skipped without checking for any additional errors.

Local Correction.
When an error is detected at a point insertion/deletion and/or replacement operations are executed until a well formed text is achieved.
The analyzer is restarted with the resultant new text as input.

Global correction.
It is an enhanced panic mode recovery preferred when local correction fails.
It has high time and space requirements therefore it is not implemented practically.

With this article at OpenGenus, you must have a strong idea of Lexical Analysis in Compiler Design.

In this article, we shall briefly introduce APIs and then look at the various types of API protocols that are employed for their usage.