When we reward our kids, or pets for perfectly carrying out an assigned task, or when we scold them for not doing what was expected of them, we are actually engaging them in a reinforcement kind of leaning; each time they are rewarded (positive reward), we are reinforcing the very action they performed, and when they are scolded (negative reward), we are discouraging that very action.

Here is an excerpt from the proposal summited to the Rockefeller foundation in 1956 by a group of ten scientist who convened at Dartmouth College:** We propose a 2 month, 10 man study of artificial intelligence be carried out…..The study is to proceed on the basics of the conjecture that every aspect of learning or any other feature of intelligence can in principle be so precisely described that a machine can be made to simulate it**. What this actually means is that we can model the rewarding behaviour exhibited by man in machines (read robot, or some other software programs), and use them to perform task originally reserved for human beings.

In this article, we will be covering the Q-function, which is a value based learning algorithm in reinforcement learning. 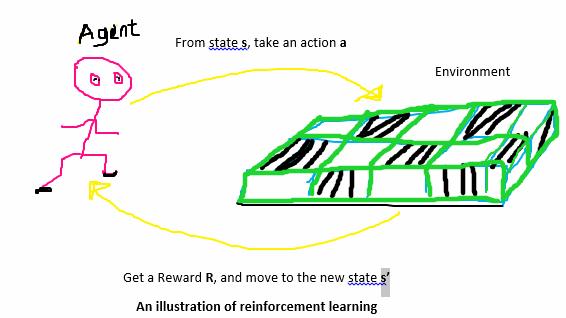 The Agent is our machine (read robot), who explores and exploits the external environment by taking actions, moving to a new state, and getting rewards.

The Environment is any external location where the agent tries to learn on its own how it can navigate across it and carry out a stipulated task.

The State is the very location in which our robot is at a particular point in time.

The Reward is the prize value for taking an action.

The Q –function makes use of the Bellman’s equation, it takes two inputs, namely the state (s), and the action (a). It is an off-policy / model free learning algorithm. Off-policy, because the Q- function learns from actions that are outside the current policy, like taking random actions. It is also worth mentioning that the Q-learning algorithm belongs to a temporal differential learning-TD. The Temporal Difference plays its part by helping the agent to calculate the Q-values with respect to the changes in the environment over time.

In Q-learning, as the agent learns and gathers insight in the environment, it stores it in a table as a reference guide for future actions, this table is called Q-table. The values stored represents the long-term reward values for specific actions taking in a specific state. Now, based on the value in a specific grid in the Q table, the Q learning algorithm will guide the Q agent to which action to choose in a particular situation to get the best expected reward.
Generally, before updating with new q-values, the q-table or matrix is first initialized to zeros.

We use code as this

This numpy codes sets the entire reward table or matrix to zeros.

The Q in Q-learning represent quality, the algorithm seeks to know how useful a particular action is to be able to rake in maximum future reward, this implies that the Q-function is interested in quality of the action that is necessary to move to a new state, rather than calculating the value of the state.

Let us now create a scenario where our agent will need to get to the location with an item in the table below, starting from point A; it will be difficult for the agent to perform this task, because the agent doesn’t know what path to take, hence we need to guide it with some form of footprint it will follow. 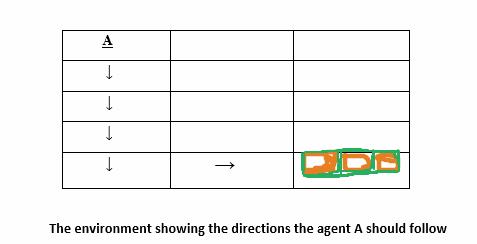 Table with footprint for the agent

Now, let us assume we put the values 1 as the guide and footprint for the agent, there comes a time in the grid/environment when the agent will run into decision issues, as in the case above, here we have the same values on the left and right side. How is this agent going to decide which path is optimal relative to the end location? This is where the Bellman’s equation takes over for a smooth operation and guidance.

Here we have a grid marked with unknown value - blue asterisk, assuming we take the discount factor = 0.85, its value at the start location using Bellman’s equation will be-

Note: Although the agent in this case can see that a reward “1” is next to the end_location with the highest reward, but it cannot go to that grid (read state) the grid is not directly accessible for now, hence, in that instance, R(s,a) = 0; On the others hand, this agent knows the value of this very future state , that is V(s′) = 1. Consequently, with this information at hand, we can calculate the various states from the start location to the end location.
We will get these state values: 0.522, 0.6141, 0.7225, and 0.85, as tabulated below: 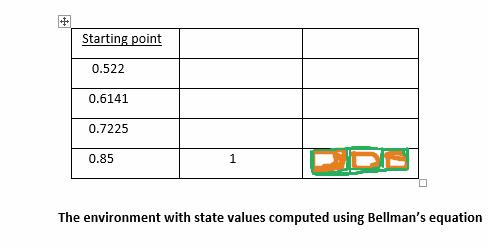 If we compute all the state values in the table, the agent can now easily go to the end location using these values as a guide. In the light of these, it is now obvious that the equation basically gives us the value of any state in time.
With that said, it is worth remembering that in reality, our environment is filled with a lot of uncertainties, and some level of randomness, this makes it difficult for things to function exactly as expected. With probability now as a factor, we move into Markov Decision Process MDP.

Markov Decision Process is a discrete time stochastic control process, it provides a mathematical framework for modelling decision making in situations where outcomes are partly random and partly under the control of a decision maker

Using our Bellman’s equation as usual:

Taking into account the probabilities of moving from the current state s, taking an action a to get into the future state s′ = P(s, a, s′), our Bellman’s equation becomes:

Recall from our definition of Q learning function - that the Q-function is interested in quality of the action that is necessary to move to a new state, rather than the value of the state, also, that it belongs to a temporal differential learning TD, and bringing to mind that, in the original Bellman’s equation, we were taking all maximum values resulting from taking certain good actions; this can be understood to mean that V(s) is the maximum of all the possible values of Q(s, a); therefore, if we imagine this in terms of quality of an action, with regard to the q-function, we can replace V(s) with Q(s,a) in the equation:

Substituting further, we get:

Furthermore, we will bring component of the temporal difference into play, because we are not very sure of the exact reward we will get in the future state s′; to do this, we will subtract the known q-value from the new q-value –

Once we get the New Q(s,a), an update in done on the q-table using this equation:

α = stands for the learning rate, this regulates how fast an agent adapts to the uncertainties or random changes encountered in the environment.

Finally, substituting for TD in the updated equation, we get:

Now, let us go over and try our hands on some Python implementation of Q-learning

Task for the Agent:

Here is the building with the 12 apartment: 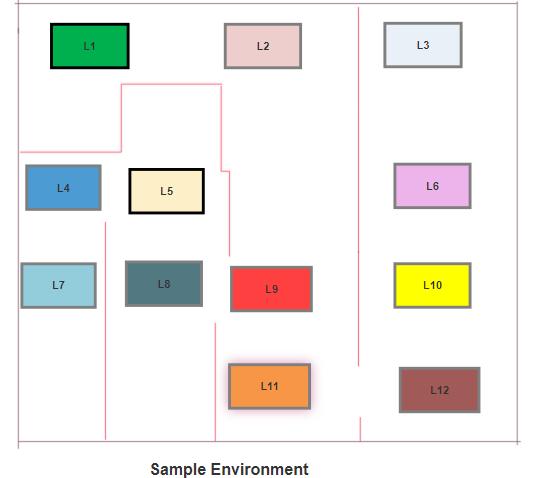 From the picture, there are obstacles between locations, hence the robot will have to navigate through these obstacles en-route the apartment of interest.

Note: The Agent in this scenario is the robot, the Environment is the building, and the apartment (read location) is the State. What We mean is that,the location a robot stands at a particular point in time, is the state.

The Actions: From the scenario, each action taken by the robot will move it to the next apartment or location, no doubt; but there are obstacles between these locations, hence for there to be a viable action, the robot should have a direct movement from one apartment to the other.

Consider this scene- the Agent is at L9, L3, and L4 at various times. 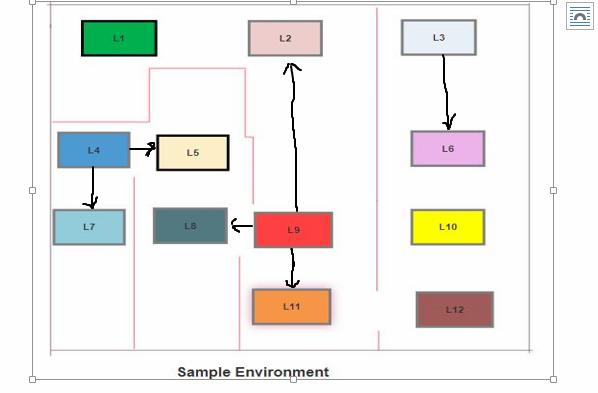 We move to the Rewards. We recall that rewards are functions of state and actions; then going by this, we now have our rewards from these sets:

Now let us construct a reward table using this 0’s and 1’s idea. 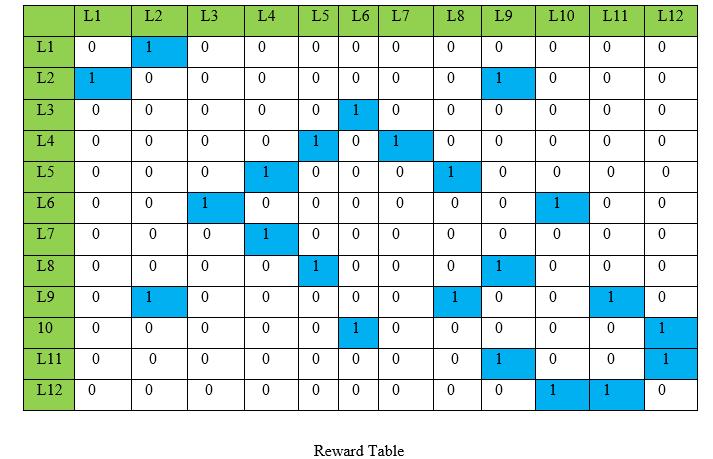 This table shows a reward matrix of all rewards the agent can possibly get from going from one state to another.

Recall that we were to assign of one the apartment with the golden key, now in other to make this possible, we will differentiate the reward at this location in other for the agent to be able to identify the apartment (read location). Here we assign a reward of 500 at location L10, L10: 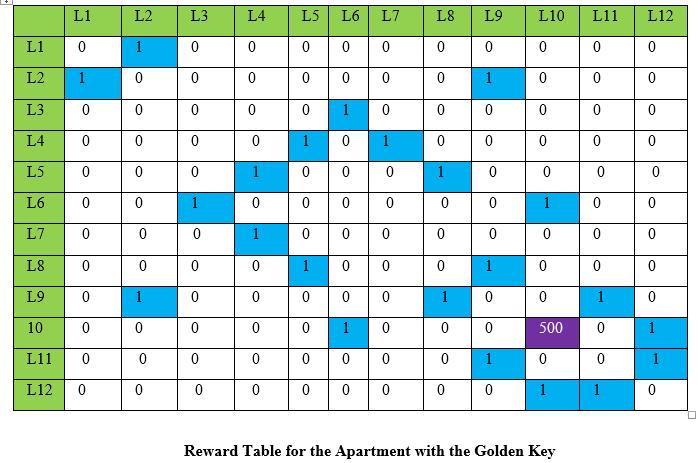 What we have succeeded in all the pictorial illustrations above, was to bring to perspective the key components we will be utilizing in our Python implementation of Q-learning.

import numpy as our dependency

define our function : get_optimal_route(it takes two argument:starting_location end_location in the building. It will return the optimal location in the form of an ordered list with letters to represent each location.

We have finally come to end of this article, I do hope it gave you some new insight, and perspective regarding reinforcement learning, and Q-learning function in particular.

My appreciation to Aditya Chatterjee of OpenGenus whose guidance has been very helpful to my reinforcement learning journey, and Sayak Paul whose article on Q-learning gave me a nice perspective in this area.

Central limit theorem is an important theorem in statistics and probability. But before gaining more knowledge about it, let us first get to know about normal distribution and sampling from a distribution.

In this article, we have explored the Dutch National Flag Problem which is a standard Algorithmic Problem proposed by Edsger Dijkstra. It is solved efficiently using Three Way Partitioning technique.