The problem is to find a pattern P in a given string S. This is a very common problem and various solutions are there to tackle this. In this article we are going to discuss the Rabin-Karp Algorithm.

Rabin-Karp Algorithm is a wonderful algorithm that utilizes the technique of hashing to search for patterns in a string in linear time by using a clever way of calculating hashes. This algorithm has been developed by Richard M. Karp and Michael O. Rabin in 1987. We develop the basic ideas behind the algorithm and delve into the practical use of this algorithm as well.

Now to improve our time complexity we will use Rabin-Karp Algorithm.

This algortihm uses hashes to determine whether we need to check the whole pattern or not. If you don't know what hashes are then, hashes are mappings of arbitrary size data to a fixed size data. In simple words, we can represent our data with a specific value determined by a function (refer to the image below). The function which is used to get values is called a Hash Function and the values are called hashes. 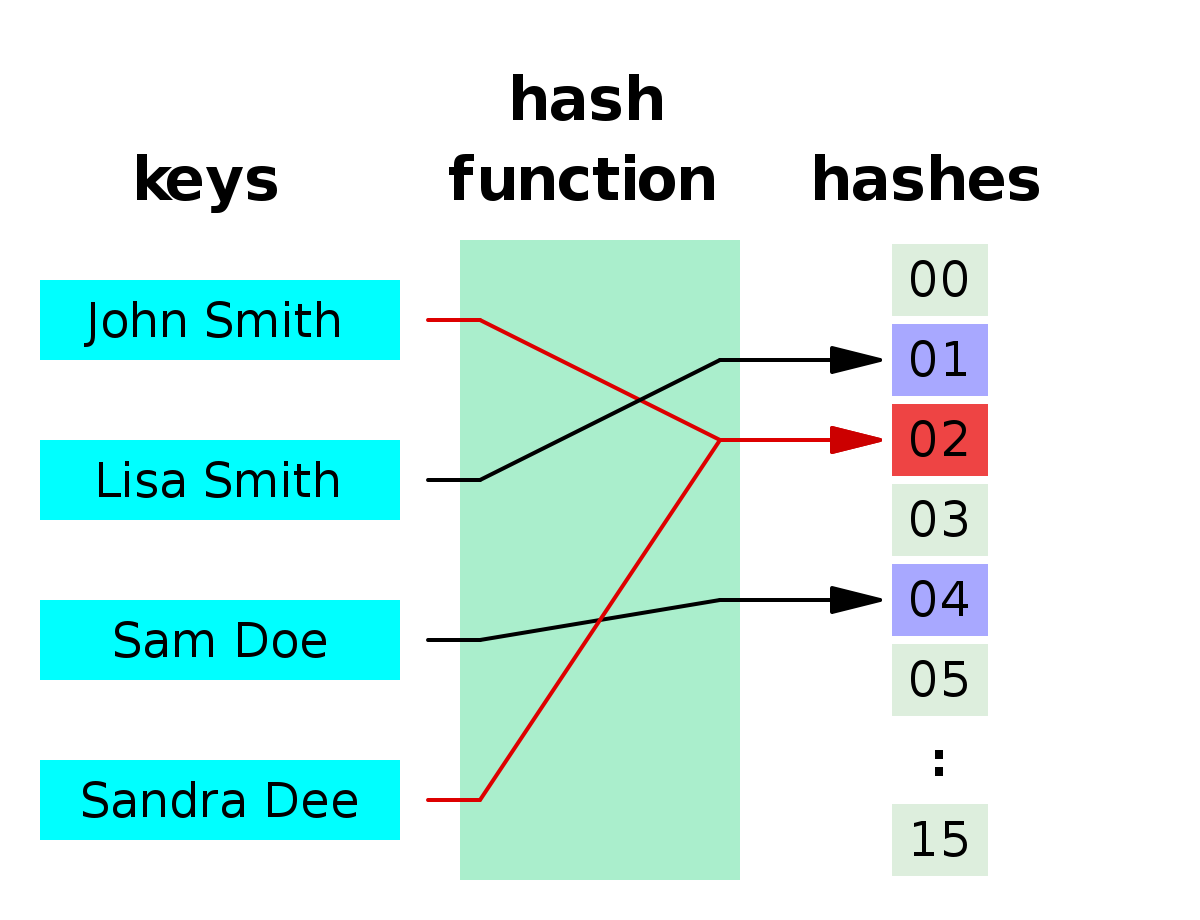 As you can see in the image, whole string can be mapped to something as simple as an integer value. Using this we can compare whole strings at one go by comparing just their hashes and not every single character. Before we move further let us see how exactly we are going to hash strings.

For proper hashing, the hashing function used should have least collisions possible.

What is collision? When two distinct keys are hashed or mapped to same value then it is called a collision. To convert a string into a hash we treat every character as an distinct integer like ASCII or Unicode. Now, we hash our string like a polynomial function. In polynomial function there is a variable x on which value of function depends.

We select this x randomly and make a polynomial function of degree equal to |S|-1. So, the coefficients of various powers of x are the integer value of the corresponding character.

This is how strings are hashed but there is a problem. If our randomly selected value is large or our string is long then the integer value will be very large. To avoid this problem we take mod of the hash value with an integer p. The integer p is a prime number because a prime number has no factors other than 1 and itself so, the number of collisions will be least. We take this prime number as large as possible.

Now the problem that remains is to efficiently compute hashes for all sub-string of length equal to that of pattern. For this we need to observe that hashes of two consecutive strings is very similar (not equal).

Take a look at this example carefully: 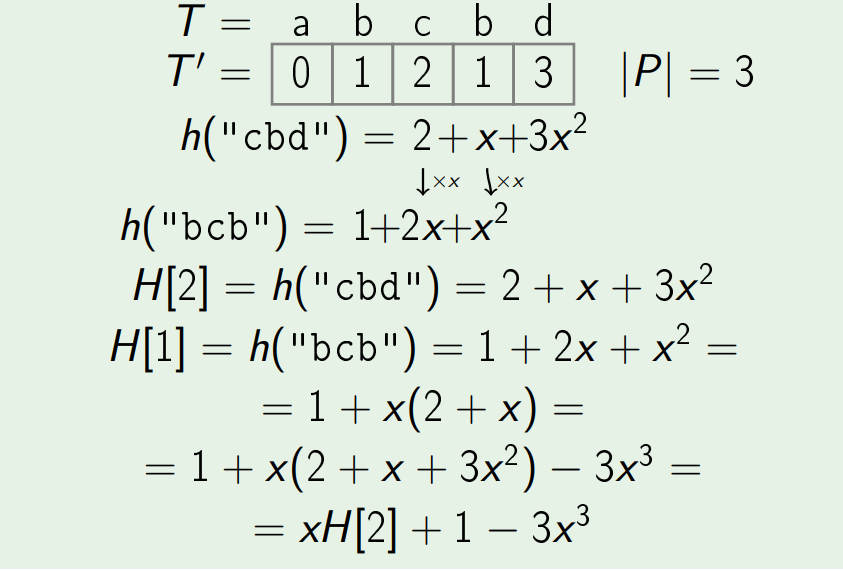 Now, on close observation we can see it is an recurrence relation. If we solve this relation the result is:

Where,
H is an array of hash value containing hashes of all sub-strings.
p is a big prime number
x is random integer between 1 and p-1
|P| is length of the pattern
S is given string in which pattern is to be searched

In this way, we can get hash value of all sub-strings in single scan of the string that is in O(N) time complexity.

After we get all the hash values we will just compare sub-strings whose hash values are equal to that of the pattern. There is one more thing to note: we can choose any one of the two recurrence relation but the algorithm for both of them is also different. If first relation is used we will compute hashes from the end of the string to the begining and in the second relation hashes will be computed from the beginning to the end of the string.

Worst case complexity occurs when all the hashes of sub-strings and pattern are equal.

C++ implementation of Rabin-Karp is given below:

In this article, we explored some of the basic data science concepts everyone needs to understand to ace things in real life. We demonstrated basic statistic measurements such as median, bayesian statistics, probability distribution, dimensionality reduction and over and under sampling of data.

In this article, we give the relation between MKL, MKL ML and MKL DNN. MKL is a closed sourced BLAS library while MKL ML is an open-source BLAS library which is actually a subset of MKL. MKL DNN is an open source library used to optimize Deep Neural Network operations and depends on a BLAS library.