Statistics and Probability are a powerful tools to use in real life in general. Basic concepts in Statistics give a solid foundation to understand things around us better.

From a high-level view, statistics is the use of mathematics to perform technical analysis of data. A basic visualisation such as a line chart will give some high-level information but with statistics we get to operate on the data in a much more in an intelligent way.

We will explore 5 fundamental statistics concepts that you need to know and how they can be applied most effectively in general things in everyday life.

Statistical features is the most commonly used statistics concept. It is the first basic technique you would apply when exploring a dataset and includes things like bias, variance, mean, median, percentiles, and many others. It’s all fairly easy to understand and implement in code. Check out the following illustration:

The line in the middle is the median value of the data. Median is the most frequently occuring data in the dataset. Mean is the average value.

Example: For instance, you have received a test result and you want to have a quick idea of your performance as ranks are not published these days. If you have access to test results of your fellow classmates, the process is easy. Calcutate the basic statistics measurements like median, mean, quartile and others. If your result is the median, you performed like most other classmates but if you are on the higher percentile, then you are one of the best.

A box plot perfectly illustrates what we can do with basic statistical features:

Frequency Statistics is the type of statistics that most people think about when they hear the word “probability”. It involves applying math to analyze the probability of some event occurring, where specifically the only data we compute on is prior data.

Let’s look at an example. Suppose I gave you a dice and asked you what were the chances of you rolling a 6. Well most people would just say that it’s 1 in 6. Indeed if we were to do a frequency analysis we would look at some data where someone rolled a dice 10,000 times and compute the frequency of each number rolled; it would roughly come out to 1 in 6!

Bayesian Statistics does take into account this evidence that is previously occured event.

We can illustrate this by taking a look at Bayes' theorem: 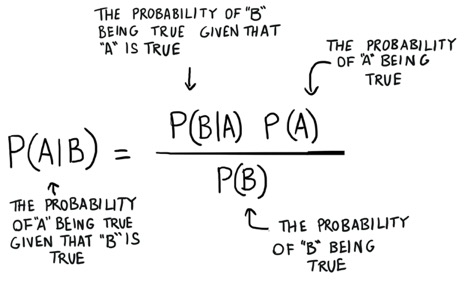 If our frequency analysis is very good then it will have some weight in saying that yes our guess of 6 is true. At the same time we take into account our evidence of the loaded die, if it’s true or not based on both its own prior and the frequency analysis. As you can see from the layout of the equation Bayesian statistics takes everything into account. Use it whenever you feel that your prior data will not be a good representation of your future data and results.

Example: You can use Bayesian Statistics to observe the performance of your friends in a game and then, come up with a strategy to outrun everyone.

Probability can be defined as the chance that some event will occur. This is commonly quantified in the range of 0 to 1 where 0 means we are certain this will not occur and 1 means we are certain it will occur. A probability distribution is then a function which represents the probabilities of all possible values in the experiment. Check out this beautiful illustration:

Dimensionality reduction refers to the process to reducing the variety of features in consideration. In other sense, we are reducing the size of data or information. Consider the fact that our Universe has 18 dimensions but we observe 3 dimensions in real life.

There are several techniques to perform Dimension Reduction such as:

Over and Under Sampling

Over and Under Sampling are techniques used for classification problems to combat the lack of a particular kind of data.

Undersampling means we will select only some of the data from the majority class, only using as many examples as the minority class has. This selection should be done to maintain the probability distribution of the class.

Oversampling means that we will create copies of our minority class in order to have the same number of examples as the majority class has. The copies will be made such that the distribution of the minority class is maintained.

We will walk you through running the official benchmark of (TF CNN benchmark) TensorFlow for Convolutional Neural Network on your machine. The process is simple and we have divided it into three simple steps: install tensorflow, get the benchmarking code and run the benchmark and observe results

Rabin-Karp Algorithm is an efficient string pattern searching algorithm that utilizes the technique of hashing to search for patterns in a string in linear time by using a clever way of calculating hashes. This algorithm has been developed by Richard M. Karp and Michael O. Rabin in 1987.