Squeezenet is a CNN architecture which has 50 times less parameters than AlexNet but still maintains AlexNet level accuracy. We also showcased the architecture of the model alongwith the implementation on the ImageNet dataset.

A significant part of the research on deep convolutional neural networks (CNNs) has zeroed in on expanding precision on computer vision (CV) datasets. For a given metric level, say accuracy, there commonly exist numerous CNN structures that accomplish that level of accuracy. For a given equivalent accuracy, a CNN model with less number of parameters enjoys the following benefits:

1. Increase in efficiency of distributed training.

2. Less overhead when sending out new models to customers.

For self-driving organizations, for example, Tesla intermittently copy the new models from their servers to clients' vehicles. This training is regularly alluded to as an over-the-air update (OTA update). Customer Reports has tracked down that the wellbeing of Tesla's Autopilot semi-autonomous driving usefulness has gradually improved with recent over-the-air updates. Nonetheless, over-the air updates of the present average CNN/DNN models can require enormous information moves. With AlexNet, this would require 240MB of correspondence from the worker to the vehicle. More modest models require less communication, making successive updates more possible.

Hence, we can see that smaller CNN architectures possess an advantage as they have fewer parameters with equivalent accuracy.

Design of the SqueezeNet model

This section deals with the SqueezeNet model and how it is made to have 50 times less parameters than the state-of-the-art AlexNet model.

SqueezeNet model uses certain strategies to trim the majority of parameters. These are:

3. Downsampling later at the network: By downsampling later at the network, we are able to get larger activation maps for the convolution layers. In a convolutional network, each convolution layer produces an output activation map with a spatial resolution that is at least 1x1 and often much larger than 1x1. The height and width of these activation maps are controlled by: (i) the size of the input data (256x256 images) and (ii) the choice of layers in which to downsample in the CNN architecture.

Strategies 1 and 2 are mainly to reduce the number of parameters. Strategy 3 is all about maximizing accuracy with the restricted amount of parameters. 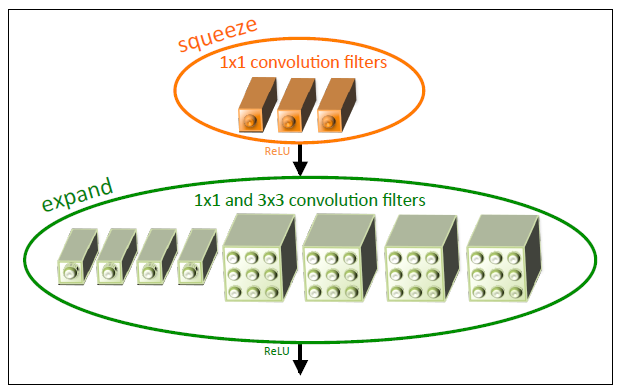 The SqueezeNet architecture begins with a standalone convolution layer (conv1), followed by 8 Fire modules (fire2-9), ending with a final conv layer (conv10). The number of filters per fire module is gradually increased from the beginning to the end of the network. SqueezeNet performs max-pooling with a stride of 2 after layers conv1, fire4, fire8, and conv10; these relatively late placements of pooling are per Strategy 3. The entire macroarchitectural view of the SqueezeNet architecture is showcased below. The leftmost shows SqueezeNet, the middle one is SqueezeNet with simple bypass, and the rightmost one is SqueezeNet with complex bypass. 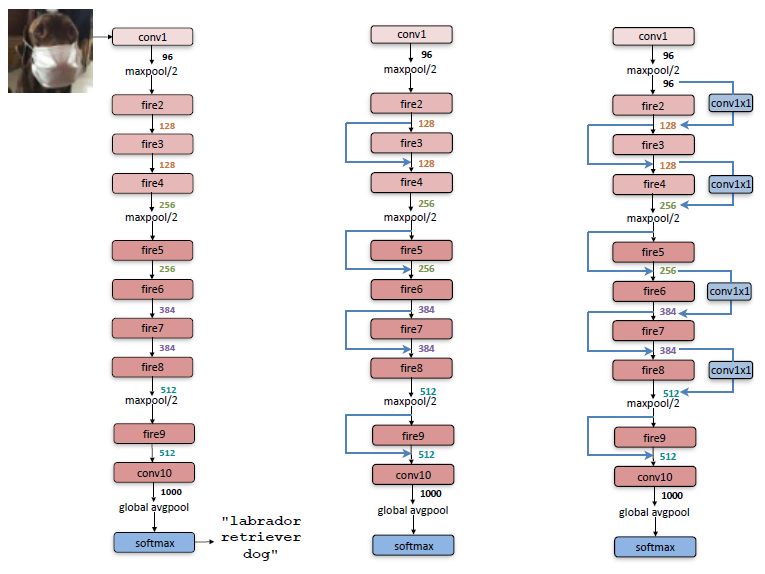 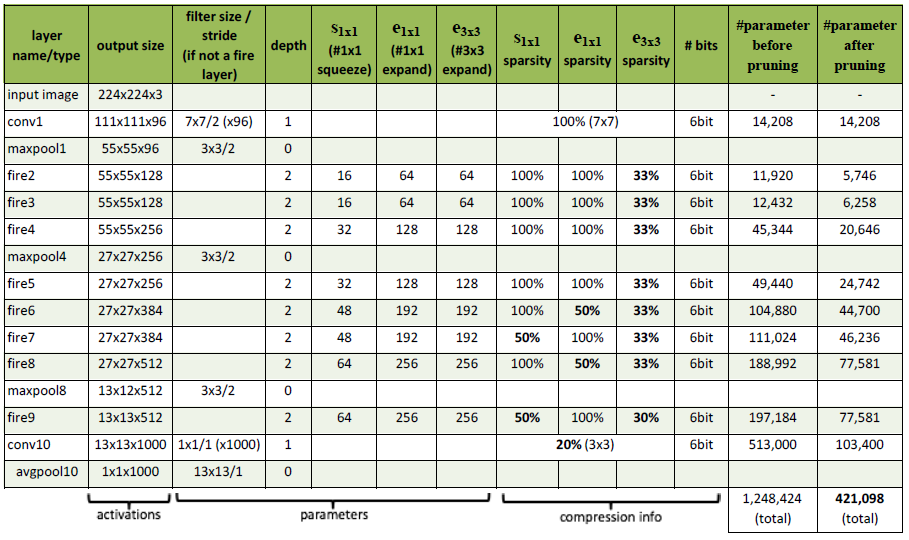 The model is evaluated on the ImageNet dataset and the output is compared with the output of AlexNet model on the same dataset.

The following table gives us an overview of the various compression techniques used for achieving the highest possible accuracy with fewer parameters.

Following inferences can be made with the above table:

Further, 6-bit and 8-bit compression was implemented on the SqueezeNet model making the model down to 0.66 MB and 0.47 MB size respectively (363x and 510x reduction in size respectively) while maintaining the top-1 accuracy and top-5 accuracy on ImageNet.

In this article at OpenGenus, the SqueezeNet model was showcased. Squeezenet is a CNN architecture which has 50 times less parameters than AlexNet but still maintains AlexNet level accuracy. We also showcased the architecture of the model alongwith the implementation on the ImageNet dataset. Also, with the help of deep compression techniques, we are able to fit this model on devices such as FPGAs which have a limited on-chip memory. You can test this model by going to this link.

Given a string with opening and closing braces, our problem is to find the minimum number of operations to make the string stable. This can be solved efficiently using Stack.

In this article, we have explained how to use qsort that is Sorting using stdlib.h in C. We have presented the use-case using code examples.